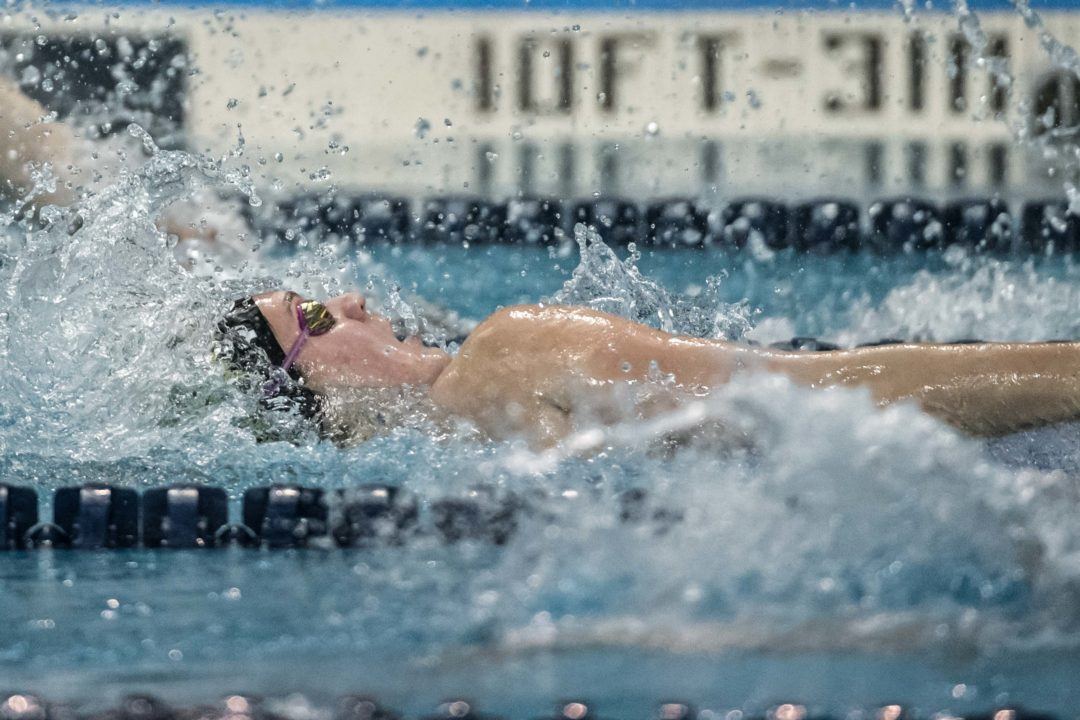 NC State freshman Emma Muzzy ran down UVA’s Megan Moroney on the final few strokes of the women's 200 backstroke Saturday night at the 2019 Women's ACC Swimming & Diving Championships, surging ahead at the finish, and touching in 1:51.66 to take the victory. Current photo via Mike Lewis/Ola Vista Photography

NC State freshman Emma Muzzy ran down UVA’s Megan Moroney on the final few strokes, surged ahead at the finish, and touched in 1:51.66 to take the victory. Moroney was in the lead at the halfway point, and appeared to have the event sewed up after splitting 28.00 on the 3rd leg, but she faded to a 29.88 on the final 50 while Muzzy closed in 28.30. UVA swept the next three spots, with Moroney touching 2nd in 1:51.98, and Emma Seiberlich taking 3rd in 1:52.54.

Call it the #BernadinoEffect? NC State absolutely rocked this event, sweeping the top four spots and picking up a whopping 162 points, rocketing them out to a 139-point lead over Louisville.

Defending champion Reka Gyorgy of Virginia Tech looked to be in control through the first half of the race, but the Wolfpack women began creeping up on her during the breaststroke leg, and she just could not hold them off. She would end up in 5th, touching in 4:08.72, over four seconds slower than her winning time from last year.

NC State earned a whopping 162 points in this event, dramatically altering the look of the team race, as they went from a 14 point lead over UVA to a 139 point over Louisville.

I bet you it felt great for Muzzy to win the race after the girl from UVA in the lane next to her was caught on video spitting in her lane right before the race! Real classy, UVA. Great job NC STATE! Good things happen to good people. If you don’t believe me, ask the NC State Coach for the video – he had it on Instagram yesterday, but it has since been removed. GO PACK!

It was kind of posted as a funny joke saying that all of her opponents need to do this if it makes her swim faster. I don’t think it was malicious, probably just the angle in which she spit. Let’s make this about Emma and not making everything about State being disrespected.

Have you ever been spit on in a non-malicious manner? If so, was it a funny joke when that person spit in your direction?

They were waiting to get on the starting blocks and she spit in the water. I am sure there is plenty of saliva already in the water. I have played sports and often spit on the playing surface.

Did she spit or did she spit water? Spitting any place but the gutter is gross. If spitting water then you politely inform them you peed in the pool during warmup.