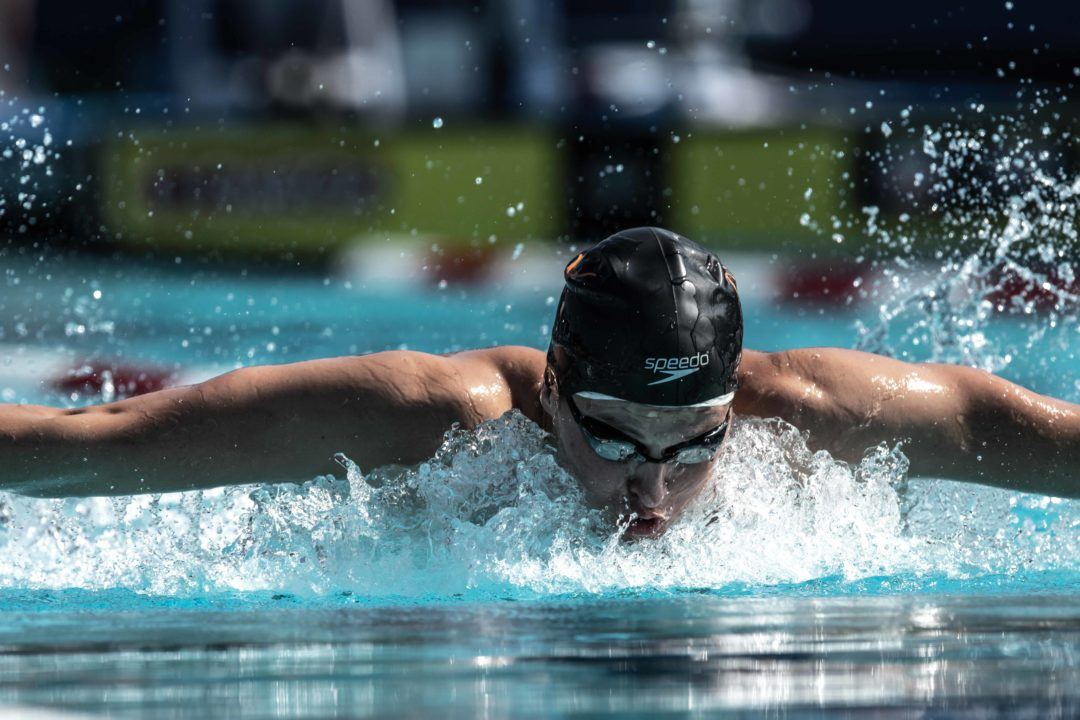 A pair of Texas Longhorns, Max Holter (above) and Daniel Krueger, are likely now in for the NCAA Championships. Several other swimmers improved their bubble status on Wednesday as well.

Oleksiak also scratched her 100 free and 50 fly earlier in the meet.

Stanford has the most A-finalists on Saturday night, led by Taylor Ruck in the 200 back.

Day 1 time trials at the Big 12 Swimming & Diving Championships have been home to electric swimming in the past, most notably when Jack Conger broke the American and US Open Record in the 200 fly in 2015. While nothing quite of that caliber happened this year, the Texas Longhorn men locked-up a few NCAA qualifications on Wendesday morning in time trials at the 2019 Big 12 Championships in Austin.

That includes one in the men’s 200 fly, where Max Holter swam 1:42.04, which would have been invited last year and falls below Andrew Mering’s cut estimation for this year (though still within the bounds of where the cut line will probably fall). In sports parlance, this time is a strong ‘bubble in’ mark.

West Virginia’s David Dixon swam 1:42.62, which right now looks like a ‘bubble out’ time, but even a few tenths in the regular event would improve his standing dramatically. He swam at NCAAs this year and placed 22nd in the 200 fly after being invited with a 1:42.50.

Another swimmer who likely locked up his spot at NCAAs was Texas freshman Daniel Krueger thanks to a 42.38 in the 100 free.Krueger came out of high school with huge accolades (including a 19.48 in the 50 free, 42.50 in the 100 free, and 1:35.58 in the 200 free, which remained his best times until Wednesday). Andrew Mering projects that it will take a 42.63 to earn an invite for NCAAs in nthe 100 free, with a lower bound on that estimate of 42.43, so Krueger is pretty close to a lock now, taking the pressure off for the rest of his meet (though he does still need some ‘B cuts’ to fill out his event lineup).

8
0
Reply
The Wolf of Raleigh

Because at NCAA’s you’re able to time trial a race for points right?

1
-16
Reply
Dudeman
Reply to  The Wolf of Raleigh

didn’t all the NCS fans freak out about Coleman Stewart going 45 in a time trial a couple of years ago and talk about how impressive it was?

I don’t think time trials should count as a qualifying time. When swimming alone in the pool the smooth water is an advantage.

Can’t we just be happy for these kids? Especially Holter, he’s been bubble out his whole career and to finally see him (probably) nail it down is really cool.

34
0
Reply
JP input is too short
Reply to  DMacNCheez

I think that time’s going to be bubblier than we think… It’s 14th in the nation right now, out of the rest of the top 50 below him, only 6 of those guys have already swam their conference meets (mostly SEC guys). A lot can/will happen between now and then!

I agree except I’d like to add that Daniel Krueger was ill for a good length of time and I’m equally happy for him. Congrats boys! Hook ‘em!

I don’t agree with with you posted, but I think an argument could be made that time trials shouldn’t be allowed for official qualification purposes ever. Same for “last chance” meets. It’s not the same as “the race”, and if you don’t qualify in “the race” why should you be allowed to participate in “the race” at whatever qualification meet you’re going for? There’s something to be said about TT’s (and last chance meets) having different (and potentially unfair) conditions….

edit: mean to be a reply to Superfan

How could it be “unfair” if everyone has an opportunity to do a time trial or compet in a last chance meet?

I’m making the argument that I don’t think anyone should be allowed that opportunity. You either do it in the same conditions as the actual race, or you don’t. If you want to do the race for your own personal enjoyment/goals/whatever, then by all means go for a TT or last chance meet. But they shouldn’t be allowed for anyone re: qualifying procedures.

By the same logic that TT’s and last chance meets should count for qualifying, theoretically time trials at the major meet should then count as a way to determine the winner of the event.

Well. There’s a reason why time trials exist. The rules are clear for certain things like qualifying for international teams where time trials and sometimes relay starts don’t count. But they’re used for Olympic Trials. Olympic Trials. So it makes sense that it would be permitted for NCAA qualification.

Of course they’re the rule now, hence why it’s used….

But think of it this way: a time to qualify for NCAA qualification is just a “place”, correct? I.e. whatever the cut-line will be….so again, by that logic, why can’t someone time trial at NCAAs and take the #1 spot in the event? It’s the same thing, right? I mean, the pool is 25yds, etc etc….

So I totally get what you’re saying about time trials, but I don’t see the justification for last chance meets not being… you know… meets.

Totally agree. It is like letting someone a week after Trials doing a time trial to qualify. Do it when you are supposed to do it!
It would be totally fair to everyone if no one would be allowed last chance or time trials. Sometimes you get someone in and sometimes you get bumped out. If no one is allowed them then fair to all.
Pac 12 swimmers don’t have the ability to wait a week to rest up and give it another shot. They seem to do ok!

2
-13
Reply
JP input is too short
Reply to  Superfan

14
-1
Reply
DrSwimPhil
Reply to  JP input is too short

I agree with you here. It’s still their conference championship meet (i.e. the same “conditions” as the qualifying meet).

0
-1
Reply
JP input is too short
Reply to  DrSwimPhil

What do you mean “same conditions?” Andrew Seliskar went a 1:41 200 fly that would qualify him for nationals, winning by 3 seconds at a dual meet last weekend. Jack Saunderson went a 1:40.6 200 fly at his conference meet winning by 5 seconds. Holter’s time trial had a 1:42.6 and a 1:43.5 with him. Which of these is the “same conditions” as, say, SECs? Should none of those swims count?

9
0
Reply
DrSwimPhil
Reply to  JP input is too short

Those conditions for Seliskar and Saunderson happened to be full races with a full field. Not empty lanes around (not to mention some of the Liberty-esk timing systems at last chance meets). And it was their one chance to race in a real race…they did it when it mattered, in the real race for a specific place that mattered.

Yes, “unfair” in the negative sense! Sometimes athletes are not “invited” to conference and qualify at the “last chance”. It’s a pool, a lane, a chance… I think everyone should be given that opportunity.

Don’t really like Last Chance meets but if someone is sick for Conference then maybe. Time trials could be used to swim your other good events. Say you swim 200 fly and the 1650 as best events. You can swim one at the time trial. Or your team is loaded with flyers and needs you in the 200 back, you time trial the 200 fly.

It’s really not. SwimSwam has about ten conference meets to cover every week in February, not too mention tons of high school State meets and then the regular news stuff they usually cover.

Even still, I don’t see how anyone couldn’t argue that NCAA qualifying times (that could swing a tight team race) aren’t newsworthy, regardless of what else is going on in the sport. Genuinely not sure if you’re uninformed or angry about another team’s success.

2 things.
Host:
Please don’t use 25 splits. Such a pain!
Anyone:
I don’t get why anyone from Big 12 needs time trials before the meet starts. Less waves? Don’t like racing? Want to make the meet longer and then complain how tired you are after the meet is over? Then how is one going to handle NCAAs when you can’t do that and you add in prelims and finals on relays?

Yeah let’s not give a team a shot to send more kids to nationals /s.
Both the events mentioned above are last day events. Pressures off now they know how fast they can go

26
-2
Reply
JP input is too short
Reply to  Superfan

I think the big thing, at least for Holter and Kreuger’s swims, is that the 100 free and 200 fly are on the last day of the meet. So they’ll both have at least 5 or 6 races, if not 7 or 8 in Kreuger’s case, of fatigue by that point. So get the event with the best chance at qualifying in the bag first, and if you go faster Saturday, cool bonus.

Just to add to what Swimmy and JP are saying…..the other factor is that in this conference, the outcome of the meet is not in doubt. It is all about getting a cut.

You must be fun at dinner parties

Regarding Max Holter’s Time Trial, I believe that the teams are limited to 18 athletes and that Holter may be competing as an exhibition swimmer at the Conference Championships, which I believe means he can compete in Prelims but not Finals. Thus, the Time Trial is his second chance to make his cut. Notice that the Texas swimmers with an asterisk next to their name do not advance to Finals. Someone who knows the rules better than I do can correct me on this, but Texas appears to be so deep that swimmers who don’t make the 18 man squad are still doing times that likely will be NCAA Invited times.

He can compete in prelims AND finals, if there’s room in finals after all scoring swimmers are slotted. He cannot score in finals, though, so he’ll be moved down in the standings. His times do count, however.