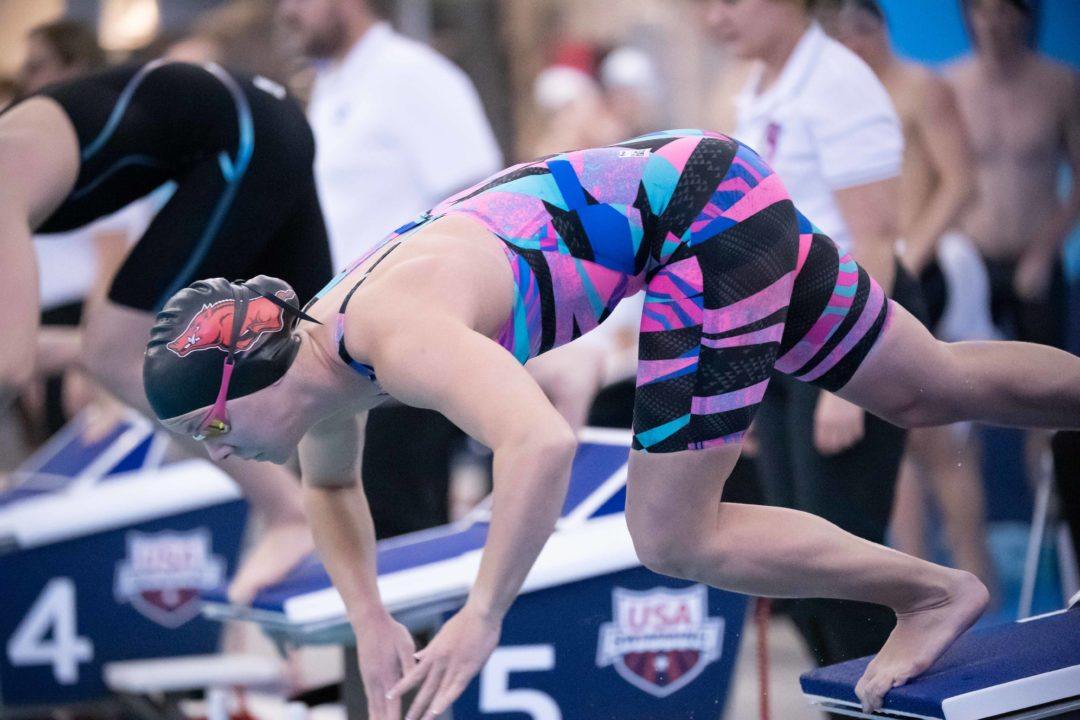 Earlier this year we took a look at how several British swimmers were faring thus far during their NCAA debuts this season. Now that several conference championships have concluded, let’s review their performances and where they’ve landed now that the final weeks of the college season are upon us. As a reminder, even though some swimmers are listed as a class above freshman, they are still first-year NCAA swimmers.

We’ll publish a 2nd edition of this piece once the remaining conference championships have concluded.

The City of Leeds swimmer-turned Florida Gator entered the SEC Championships in the women’s 100 breast, 200 breast and 200 IM, with her 200 breast time of 2:11.47 NCAA B cut claiming her highest seed of 10th.

However, things didn’t go as planned for the freshman, as she wound up adding time in this event at the championships, clocking 2:12.29 in prelims and ultimately 2:14.22 to place 6th in the C-Final. That positioned her as 22nd overall when all was said and done, but she still earned a valuable 3 points for Florida.

Earning a total of 1,023.5 points, the University of Florida women were SEC Championship runners-up, the program’s highest finish since 2011.

Hailing from one of the most prestigious training hotbeds in the UK, Bath University, Hopkin had already been making an impact on the NCAA scene in her home of Arkansas. Entering the SEC Championships, Hopkin held the 2nd seed in the 50 free in 21.64, an NCAA A cut. She held the #1 seed in the 100 free in 47.05, also an NCAA A cut. Both times also represented Razorback school records.

For Hopkin, however, Tennessee’s Erika Brown proved too much to overcome in both the sprint events at the SEC Championships. Hopkin dropped her 50 free lifetime best down to 21.58 to earn silver to Brown’s enormous 21.15 for a big-time 28 points. Hopkin also hit a near-PB in the 100 free final, clocking 47.10 to finish behind Brown’s 46.41 to rack up another 28 points for the Razorbacks.

Hopkin was a crucial component of Arkansas’ relays as well, helping her school take 6th in the 200 medley relay, 4th in the 200 free relay and 3rd in the 400 free relay, all in school record-setting times.

Overall, Hopkin helped Arkansas finish in 8th place with a totla of 517, representing the schools’ highest finish in 5 years.

Wallasey, England native Sopp raced her way to ‘Freshman of the Year’ honors at the Great Lakes Valley Conference Championships due to 3 individual victories. Sopp nailed new conference records in the 400 IM (4:15.59) and 200 fly (1:57.97) to wrangle up 40 individual points for Drury in her pet events. Her time in the 200 fly represents a Division II A cut.

At the time of our first article, Clements sat among the top 10 200 flyers in the Horizon League. However, the former Thanet Swim Club athlete no longer appears on the Grizzlies’ roster.

Remaining yet to swim at conference championships:

It is a shame that there aren’t more articles highlighting how foreign swimmers are impacting the NCAA. I would love to see across both genders how foreign swimmers contribute to a teams roater. As well as how they impact points at both conference and NCAA championship meets.

Why did we kick them out of our country if they were just gonna come back and dominate our swimmers? Not cool! Abraham Lincoln is rolling over in his grave!

Believe that would be Georgie Washington

It’s pretty typical that the emphasis on British NCAA swimmers comes a year after Josh Kenway’s career at UGA ends. One of UGA’s all time greats.