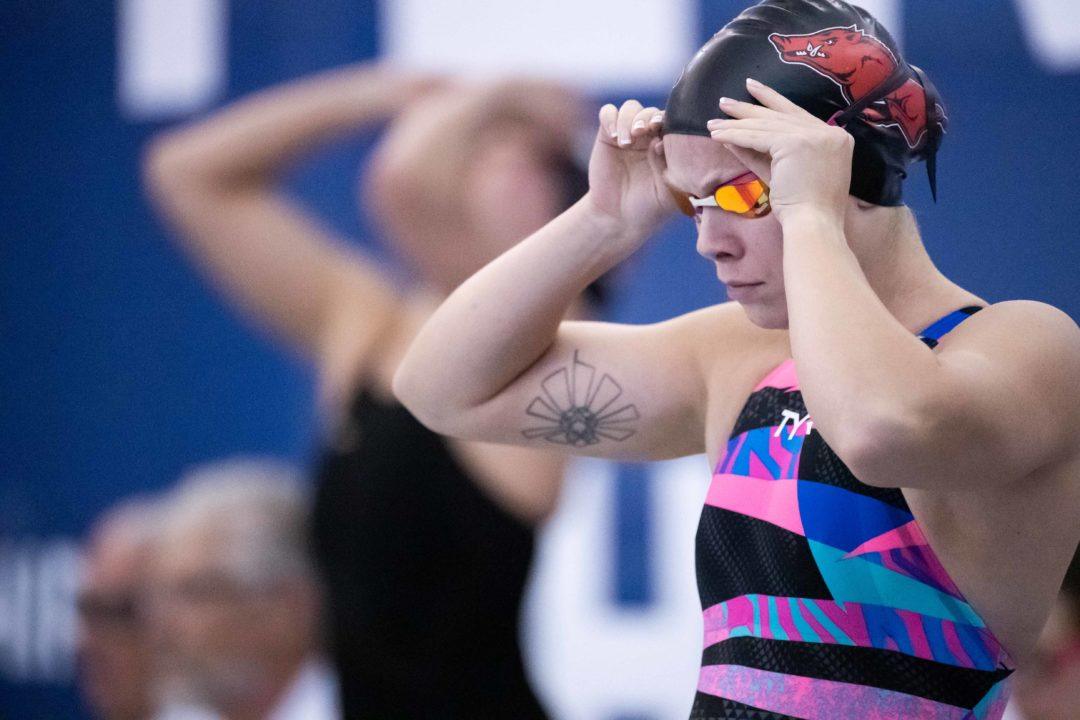 Anna Hopkin hails from Great Britain, but has been making the most of her stateside home of the University of Arkansas. Archive photo via Mike Lewis/Ola Vista Photography

With the NCAA championship season on the horizon now that we’re 3 weeks into 2019, swimming squads across the United States are buckling down to make the most of the last critical weeks of the season. Among the grinding swimmers is a handful of first-year athletes hailing from Great Britain, getting their feet wet on this side of the pond within the NCAA ranks.

Below, we’ve profiled several of the British recruits to check-in on how they’re faring during the 2018/19 NCAA season. Take a look to see the impact they’re making thus far.

The City of Leeds swimmer scored an NCAA ‘B’ cut at the Georgia Tech Fall Invite, sitting among the top 40 female 200 breaststrokers in Division 1 with her season-best of 2:11.47.

Black has already made her way onto the Gator history books during her freshman season, becoming the 5th-fastest Florida female ever in the 200 breaststroke.

Both of Black’s breast times so far would have scored in the B-Final of last year’s SEC Championships, making her a promising powerhouse come next month in Athens, Georgia.

The Ellesmere College Titan swimmer now competes for Akron stateside where she’s been getting some yards training and racing under her belt. Gardner has splashed her way through a variety of events, including distance free, breaststroke, backstroke and IM.

All of her season-best efforts would have placed in the B-Finals at last year’s Women’s MAC Championships. Her 400 IM effort of 4:23.97 ranks Gardner as the 8th fastest Zip ever in the event.

Hailing from one of the most prestigious training hotbeds in the UK, Bath University, Hopkin has already been making an impact on the NCAA scene in her home of Arkansas.

The 22-year-old Commonwealth Games relay medalist is ranked 4th in the NCAA Division I in both sprint freestyle events, holding a personal best of 21.64 in the 50y free and 47.05 in the 100y free. Both marks blew away the previous Razorback school records and register as ‘A’ cuts for this year’s national championships.

Wilson already has 3 NCAA ‘B’ cuts logged through this 2018/19 season, highlighted by her 1:55.77 200 IM time earned at the UGA Fall Invite. That blows away her pre-season personal best of 1:58.37 (converted from LCM) and ranks the former Guildford City Club athlete 11th in the NCAA Division I in the event this season.

Shepherd ranks within the top 10 of Conference USA swimmers in her 3 best events, showcasing  the Royal Wolverhampton’s capability of putting up some points in FIU’s quest for its 5th straight conference title.

She’s already creeping up the Panthers’ record books as well, checking in as the 8th fastest 200 backstroker in the school’s history.

Clements sits among the top 10 200 flyers in the Horizon League at this point in her first year of college swimming. She’s also put down some promising backstroke efforts that can help fill the gap once now-juniors Grace Shinske Katie Colwell and Rachel Boodt will eventually leave in the Golden Grizzlies line-up.

Of note, Tori Sopp of Wirral Metro Swim Club had committed to Drury, while Isabel Jones of Millfield had committed to LSU. Neither swimmer appears on her respective committed school’s roster for the 2018/19 season.

Tori Sopp has now joined Drury she flew out before new year.
She will be racing for the remainder of the season.

Perhaps the article should clarify it would only be covering Div 1 swimmers. A few other British freshman are ranked nationally in Div 2 and Div 3.

Not meant to be all-inclusive; simply a sampling.

Off the top of my head Szaranek, Disney-May (lots of relay points), Burnett possibly (not sure when he graduated).

Can’t think of many on the women’s side, though that seems to be changing.

Notable few if any of the big stars went NCAA, the likes of Guy, Scott, SMOC, Peaty and Adlington stayed in the UK, presumably influenced by pro contracts. Tom Dean another recent example who seems to have decided against the US despite initial interest, probably as he reached a level to get a sponsor deal.

Amelia Maughan & Georgia Hohmann were at Florida for a while too. Shauna Lee at Georgia currently. Freya Rayner at Ohio. Few others too!

I didn’t think Spofforth would be within a decade, might be wrong. Completely forgot about Proud and Thielmann, but certainly also candidates.

Joe Patching at Auburn now I think about it recently.

Spofforth was on the 2010 NCAA Championship team so she falls within the decade.

Marco Loughran another one Brit at UF. Adam Brown at Auburn

I hear there are a few more making the hop over this fall. Lizzie Harris has committed to FSU and has some good 100/200/400 LCM free times that should make a difference.

Se also has a pretty handy fly too.