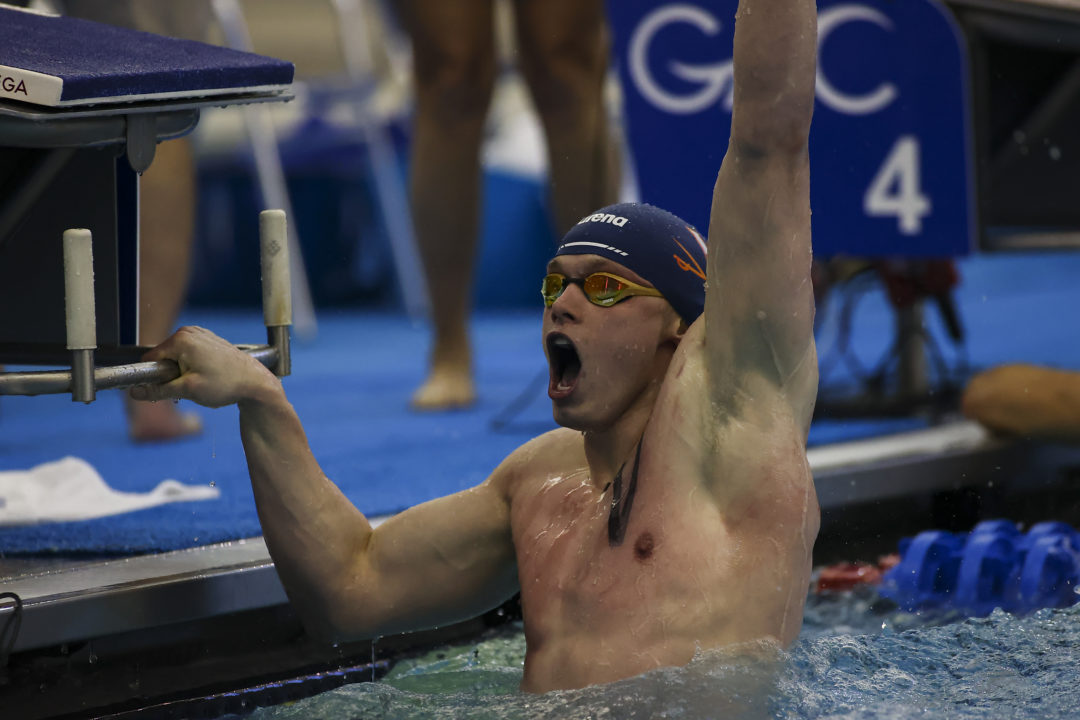 The University of Virginia announced they've arrived among the sprint elite with an American Record in the 200 free relay tonight at the ACC Championships. Archive photo via Jaylynn Nash, the ACC

When Todd DeSorbo took the helm at the University of Virginia almost five years ago, it was widely expected that we’d see the Cavaliers, historically known as more of a distance program, make the transition to an emphasis on the sprints.

And while the Virginia women have had some very quick success, including capturing a NCAA championship last year, the men’s team seemed to be playing second fiddle to the women’s team in the minds of some fans.

It may be a while before the Virginian men win the whole enchilada at NCAAs (if ever), but tonight they proved they’re at least a force to be reckoned with as they broke the meet, ACC, and American Records in the 200 free relay. The evidence was there that this could happen after the Cavaliers had five men clock 19.2 or better in the prelims of the 200 free relay, but with NC State almost matching those performances, it wasn’t clear who would come out on top tonight.

Matt Brownstead, the defending ACC champion in the 50 and the 100 free, led off in 18.87, then 2021 SEC Champion Matt King, who transferred from Alabama this past summer, split 18.49. Freshman Connor Boyle split 18.63 after hitting a lifetime best of 19.19 in the individual 50 this morning, and August Lamb anchored in 18.48 in an epic race against NC State anchor Kacper Stokowski.

Tonight’s swim was the 6th-fastest performance ever. Each of the five faster relay had at least one international swimmer, meaning that UVA now owns the American Record. NC State previous owned that mark (and the ACC record) with a time of 1:14.50 from 2018.

UVA is now less than half a second away from the U.S. Open record of 1:14.08, which Auburn set back in the supersuited days of 2009. Boyle is a freshman, Brownstead and King are sophomores, and Lamb is a junior, meaning that this quartet should have at least one more year to target that legendary mark, which is the oldest mens yards U.S. Open record on the books.

50’s and 200 free relays are for children not a real college event!

Great race between them and NC State. Commentary was a bit all over the place I felt