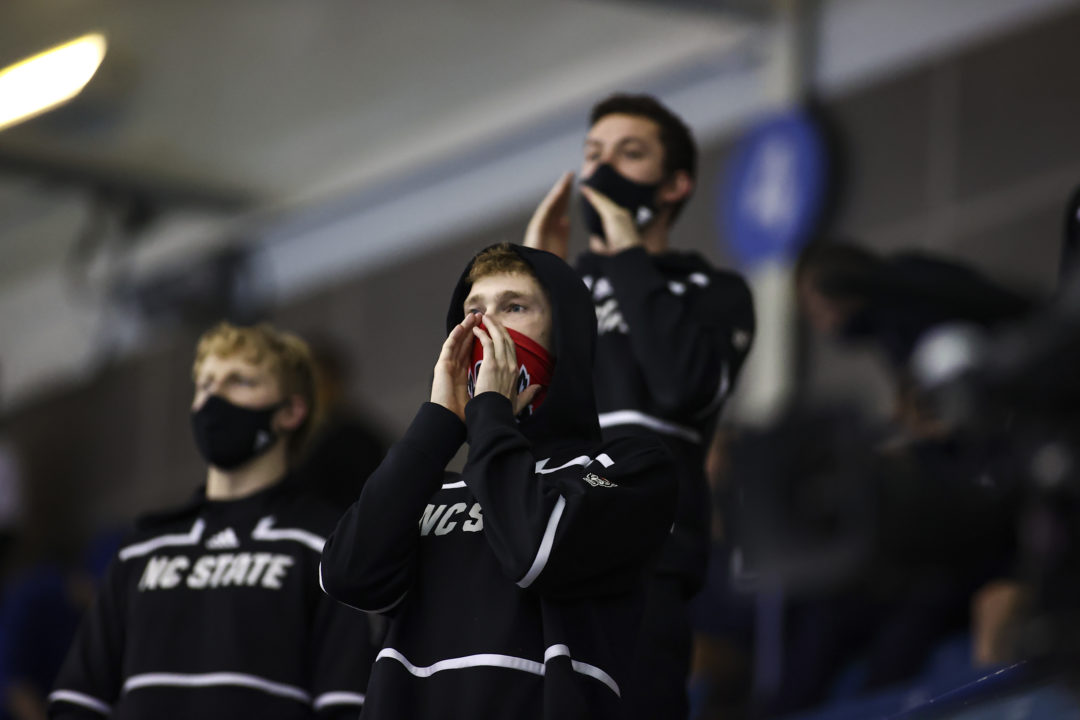 The ACC will take advantage of a waiver from the NCAA, ostensibly for COVID-19 safety, that allows conference championships to leave an empty lane. Archive photo via Jaylynn Nash, the ACC

The ACC coaches have voted to use alternate lanes for relay events at this week’s ACC Championship meet in Atlanta, Georgia. The vote came on Monday as part of the pre-championship coaches’ meeting.

The NCAA has granted a waiver for the second straight season allowing championship meets to use open lanes between relays as part of COVID-19 safety protocols to reduce interactions between teams.

One ACC coach told SwimSwam that Duke head coach Dan Colella proposed the idea, promoting it as a way to swim faster and help teams qualify for the NCAA Championships rather than as a COVID-19 safety measure.

The NCAA Championships used empty lanes last year, but will not this at this year’s championship meets.

NC State, Virginia, and Louisville, the top three teams in the conference in recent seasons, all voted against the idea, while all other teams voted in favor of it.

The idea is that ‘clean water,’ or less turbulence from other relays, will lead to faster swims. Other coaches objected on the principle that having relays side-by-side leads to more excitement and fun, especially when teams are locked in competitive team battles.

The SEC Championships this week in Knoxville, Tennessee will also use alternating lanes for relays.

Both meets begin on Tuesday evening. This year will feature a new five-day format for the ACC, plus men and women in the same meet for the first time since the 1990s.

Meet is at GT, not the GAC.

6
0
Reply
JP input is too short

I just want to see fast swimming. Doesn’t matter to me if the swimmers are one or two lanes apart…

It makes a big difference on times, particularly for the shorter relays (even more so for men). Wouldn’t be shocked to see NCAA records for the Virginia women at this meet that they don’t quite match at NCs.

If they hold this vote every year, seems quite possible the vote will turn out the same way. More coaches/teams are invested in getting (possibly) faster relay times and getting cuts than the viewing/team experience. That would be a real bummer.

Currently, it’s only allowed by NCAA waiver. I would suspect that the NCAA waiver will eventually go away – especially if they catch wind that it’s being done for competitive reasons and not COVID reasons.

Then again, it wouldn’t be the first time that coaches got a bad rule put in place to the detriment of spectators/fans, so maybe they’ll make the change permanent.

“Then again, it wouldn’t be the first time that coaches got a bad rule put in place to the detriment of spectators/fans, so maybe they’ll make the change permanent.”

What in your opinion are some other examples of coaches putting bad rules in place?

They should do 5 teams per heat. Lane 2,4,5,6,8. Teams that are 4th and 5th likely are going for A cuts and can get their clean water. The top 3 teams likely have an A cut and get to enjoy the intensity of a side by side lane battle in the middle

You can’t have unequal footing

I guess it’s not too surprising that the fastest teams (who will easily make their relay cuts – or already have them) voted against this approach.

Has SwimSwam run the data on whether or not clean water actually leads to faster swims? Anecdotally from my own experience, I feel like it has, but it would be interesting to see what conclusions you can draw from a broader data set

I think anecdotal evidence is the strongest here

It’s an interesting question. Anecdotally it’s clear with how many records are set in time trials.

Maybe look at lead-off legs in meets with the lane gap and without?

Looking at lead-off swimmers who also swam the same event at the same meet (so it would be limited to 50/100/200 free and 100 back), and compare their lead-off time with their individual time. Then split those into meets where they had gaps and didn’t.

But there are a lot of other factors

Yes, but by averaging, a lot of those factors cancel out.

I know this is not exactly what you are asking for, since you specifically mentioned comparing lead-off times with individual times at the same meet where there is empty lanes..

Is that because the water is clean or because they don’t have the mental strain of swimmers near them in actual competition with repercussions fir performance or lack there of. The shift of mental energy is huge and difficult to quantify.

I don’t think there is enough data to make that decision. Too many factors that you can’t control outside of it.

Anecdotally from my experience as a coach and as a masters swimmer, there can be a pretty significant difference between clean water and turbulent water, but it also depends on who’s on either side.

For example, I had a masters swimmer who was rock solid with 24 flat (well, 23.8-24.2) splits with a flying start on 200 free relays in clean water, but in one meet with much larger, much faster guys on either side, who both split :20 high, his split was a 24.8. I’ve seen a similar impact in my own races when I’ve been swimming fly and free on relays in turbulent water, with more of a slowdown in my times when I’m racing people significantly… Read more »