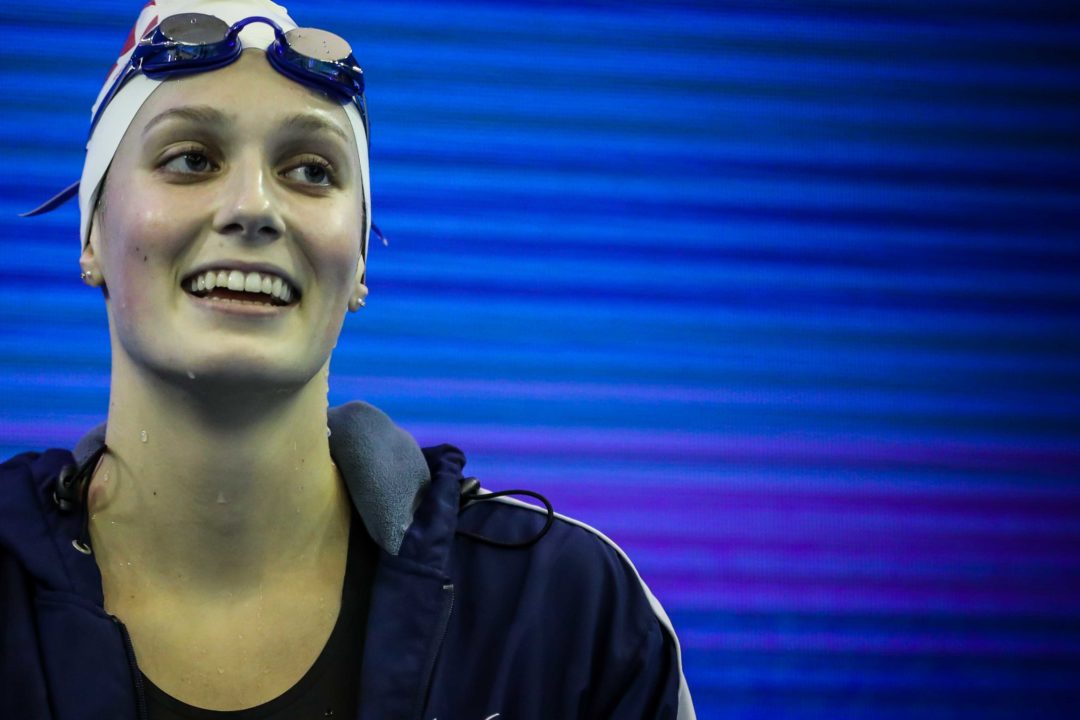 All eyes were on the center of the pool tonight for the A-final of the 200 IM at the 2021 ACC Swimming Championships, but in a fairly unexpected turn of events, it was the swimmer in lane 5, not lane 4, who got her hand to the wall first.

UVA sophomore Kate Douglass had looked like she was primed to go after the U.S. Open Record of 1:50.67, set by Ella Eastin in 2018, this week. As a freshman at last year’s ACCs, she hit 1:51.36, the fastest time ever by a freshman, then she came back this fall to go 1:50.92, just a quarter of a second away Eastin and the 3rd-fastest performance ever.

Walsh knocked over two seconds off of her lifetime best tonight, with her previous best time of 1:53.56 coming over two years ago at the 2018 Winter Juniors. Tonight’s swim was the 6th-fastest performance ever, and was the 2nd-fastest ever by a freshman, behind only Douglass’ swim from last year’s ACCs. Including Ella Nelson‘s 1:54.72 from December, the Cavaliers now have three of the four fastest freshmen in this event ever.

It remains to be seen whether or not tonight’s outcome has any effect on the Cavaliers’ event selection for next month’s NCAA Championships. Douglass has the fastest time in the nation this season in both the 200 IM and the 50 free. UVA already had more depth in the 200 IM than in the 50 free, and with Walsh now faster than anyone else, besides Douglass, in the NCAA this season by over a second, this may push the needle in terms of UVA opting to swim Douglass in the 50 free at NCAAs.

I figured all the limelight that Douglass was getting might light a fire under Walsh..

Something is wrong with the splits. I just watched the video. Walsh had closed the gap with Douglass on the backstroke. She did not outsplit her by more than a second on the breaststroke.

Walsh made up a lot of time in the back to breast turn, So a lot of that outsplitting wasn’t done in the swim but on the wall and pull out

Great swims by both ladies. Alex has shown that she has had this capability for awhile.
Glad these two are training partners.
Go UVA!

Honestly with this big time drop I think she has moved up to be a possible favorite for one of those 200 IM spots this summer. A lot of competition but I could easily see her go 2:08 probably 2:08 low

I see Walsh going very fast long course, her stroke is just so efficient and she has no weak stroke. Her middle 109 is sick. Would be cool to see her and her sister on the Olympic team

I think the only competition for Douglass in the 50 free at this point is MacNeil so I’d say for NCAAs, Douglass should swim the 50. Walsh has the 200 IM covered

It’s an interesting choice for Douglass and her coaches. Anything can happen in the 50. Regardless of what they choose, it’s a great problem to have.

Check out their splits. Alex outsplit Kate in breast by over a second after Kate goes 2:03 breast in a dual meet!?!

I think Kate went too fast in prelims. Alex saved some more for the finals and paced it better.

Honestly I think this whole “went too fast in prelims” narrative is generally a bit overrated. These swimmers do insane things in practice day in and day out, they can handle 2 200 IM’s 8 hours apart. Kate may not be fully rested because she’s got her cuts already and doesn’t need to come down all the way to get the points UVA needs