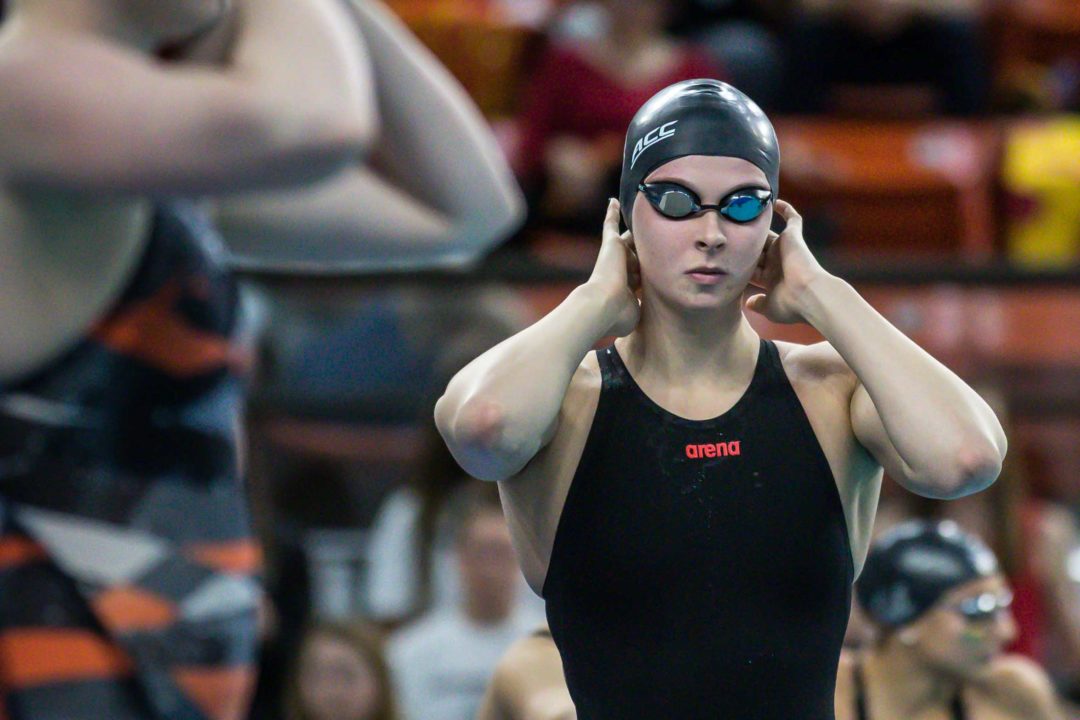 NC State junior Sophie Hansson broke her own ACC record and moved into a tie for #3 all-time, with her 57.23 win in tonight's 100 breast. Current photo via Jack Spitser/Spitser Photography

NC State junior Sophie Hansson broke her own ACC record in the 100 breast with a time of 57.23 tonight as she won her first 100 breast NCAA title. Hansson’s previous best time was a 57.45, which she set last month while winning her 3rd-straight ACC title in this event.

As a freshman in 2019, Hansson took 3rd at NCAAs with a time of 57.90, finishing a little over two seconds behind Lilly King‘s record-setting time in her last time competing this event at NCAAs. Heading into last month’s ACC Championships, Hansson’s best time was a 57.74, a time which she initially set at the 2019 ACCs and then tied at the 2020 ACC Championships.

Hansson’s time tonight moves her up to tied for #3 all-time in the event, behind only King and Molly Hannis.

ACC swimmers took up three of the eight lanes in tonight’s A-final, as UVA’s Alexis Wenger took 3rd in 57.67, just off of her ACCs 2nd place time of 57.60, and Hansson’s teammate Andrea Podmaníková touched 7th in 58.62, about half a second away from her ACC 3rd place time of 58.10.

Hansson is also seeded first in the 200 breast, which will be contested tomorrow. That should be another ACC-heavy event, as NC State and Virginia each have two of the top eight seeds in the event.

What a great swim.

Good to see that she’s coming out of her sister’s shadow with an NCAA crown of her own. Go Sophie! Good thing for Swedish breaststroke with Brunzell winning the B-final too.