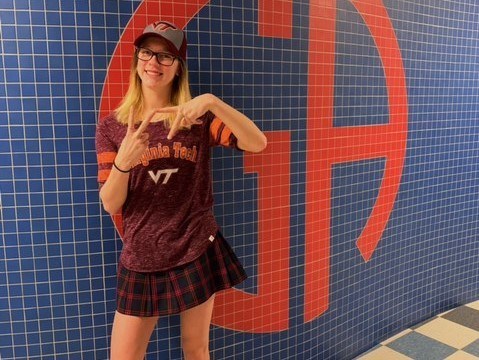 At the 2021 ACC Women's Championships, the Virginia Tech women finished in 4th place for their best performance at the meet since 2015. Archive photo via Emma Atkinson

Following their sprint freestyle sweep and 4×100 freestyle victory at the 2021 SEC Championships, we did a breakdown of Alabama’s recent surge to the top of the NCAA sprint scene. Another team that showed a significant improvement from recent years this week has been Virginia Tech.

At the 2021 ACC Women’s Championships, the Virginia Tech women finished in 4th place behind Virginia, NC State, and Louisville. That’s their best performance at the meet since their third-place finish back in 2015 when only Virginia and UNC managed to out-score them.

In order to track down just what changed from one year to another, we can take a look at the team’s scoring breakdown by year.

The most obvious stat here is the general trend upward in how many points every year is scoring. In 2019 the maximum number of points scored by any one year was 104 by the juniors. In 2021, every year exceeded 104 points as the seniors hit the minimum of 106.

Not only is the overall number of points scored by each year increasing, but each year of swimmers that have been around prior to the 2020-2021 season have actually peaked at this year’s championships.

Combine those three respective peaks by the classes of 2021, 2022, and 2023 with a 201-point yield by this year’s freshmen, and it’s pretty clear that the VT women are in the best shape they’ve been in in a while.

Among those freshmen providing a promising future for the team are Chase Travis, Emma Atkinson, and Caroline Bentz. The three of them were in the top 5 of their team in terms of points scored at the meet:

Together, they put together 7 top 10 finishes at ACCs last weekend.

So while the team is not relying solely on their freshmen, VT’s youngest year is certainly providing additional hope to the team’s aspirations for the remainder of the season and in years to come. With only a few weeks between now and NCAA Championships, it will be exciting to see how they fare at the first collegiate championships since 2019.

Two years ago, VT earned 40th out of 43 teams at NCAAs but, scoring only 5 points. Having jumped 4 spots at ACCs since then and with another 2 years of improvement, VT is definitely within striking distance to climb the ranks once again.

Love seeing programs on the rise!

The womens team had a great week and i suspect the mens team will open a few eyes this week. Sergio and his staff are going great things in Blacksburg.