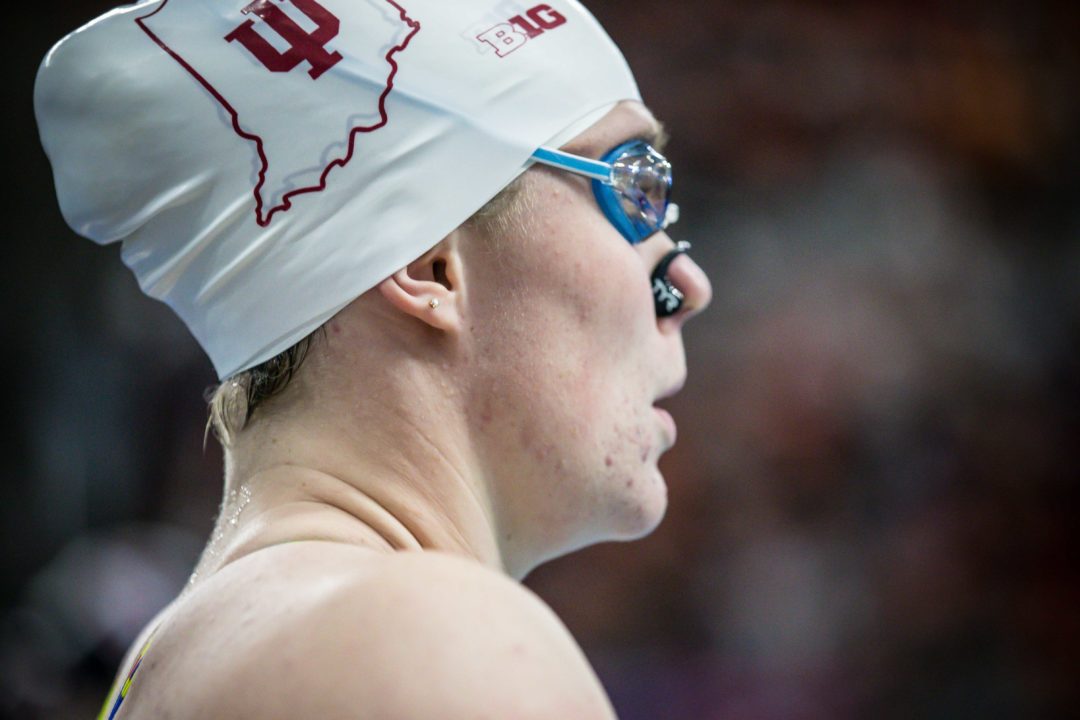 Alabama has quickly turned into one of the leading schools in women's sprint free. How they will fare given their recent coaching turbulence. Archive photo via Jack Spitser/Spitser Photography

Texas A&M junior Kylie Powers injured a groin muscle in warmups before finals on Friday, causing her to add 5 seconds in the 100 breast.

While Alabama wound up 4th and couldn’t quite catch Kentucky, Florida, or Georgia this week at the 2021 SEC Championships, it certainly was through no fault of their sprint freestyle.

That swim with which Scott won tonight’s 100 freestyle SEC Championship title was not only a new personal best time, but it was a new Alabama school record in the event. The swim broke teammate Kalia Antoniou‘s record of 47.82. Prior to that, the record was held by Flora Molnar‘s at a of 47.98.

Just a few events after Scott’s 100 freestyle victory, the University of Alabama women came back to win the 4×100 freestyle relay, hitting a 3:10.28. That was enough to beat out Georgia who finished in second with a 3:12.08 and Tennessee who were third with a 3:13.10.

The winning team managed to each pull off sub-48 splits, including an opening split of 47.93 by Kalia Antoniou which was faster than her finals swim tonight.

That swim for the Alabama women gives them the quickest time in the nation thus far and is within 4 seconds on California’s 3:06.96 NCAA record in the event from 2019.

The individual 100 freestyle and 4×100 freestyle wins for Alabama are a true testament to their current sprint power that has been developing over the past few years. While there are certainly a number of factors that contribute to a team’s success, one that can’t be ignored in this case is the effect of Coley Stickels.

Stickels took over as head coach of Alabama in April of 2019 and has already had a significant impact on the team’s sprint success. For proof that Alabama has improved in recent years, we can take a look at 50 and 100 freestyle rankings over the past few seasons. Along with helping those who he met at Alabama, Stickels inspired two of Alabama’s current lead sprinters to make the move from Indiana with him. Morgan Scott, Cora Dupre, and Julia Wolf had previously swum with the Hoosiers but made the move to Alabama after the 2018-2019 season.

Combining Scott, Dupre, and those other sprinters already at Alabama, take a look at how the school’s NCAA-wide ranks have improved over the past few seasons.

As we near the end of the 2020-2021 season, the Alabama women are continuing on the upward trajectory they’ve seen over the past few seasons. Their NCAA-wide ranks put them in good shape for the upcoming 2021 collegiate championships. In the 50 freestyle, Kalia Antoniou and Cora Dupre sit at #3 and #5 in the nation with a time of 21.69 and 21.82, respectively. Morgan Scott also sits within the top 15 with her 22.07 for 13th.

In the 100, Morgan Scott‘s new school record gives her the 3rd fastest time in the nation this season while teammate Kalia Antonious sits in 6th with a 47.82 and Cora Dupre sits in 9th with a 47.90. Having a 3-6-9 ranking in any event in the NCAA is certainly a mark of sheer strength for a team. The one caveat is that we still have yet to see the Pac-12, Big Ten, and Big 12 at conference this season, all of which take place next week and could shake up these rankings.

With a clear improvement since Stickels started as head coach of Alabama, they have certainly surged to the top of the women’s freestyle ranks. The big question now is what will happen to that momentum following Stickels’ departure from the team. It was recently announced that he would be stepping away from the position and since then, associate head coach Ozzie Quevedo has been leading the charge. Clearly, Quevedo has been able to maintain and manage the team amid Stickels’ departure but the shift in coaching at the end of December was not the only one that will occur this year.

Beginning in the fall of 2021, Margo Geer will take on the role and will look to keep working the sprint freestyle powerhouse. Geer originally found her way to Alabama when she made the move as a pro swimmer training with Stickels at Indiana. She has been swimming there ever since but recently announced her retirement from the sport as she shifts her sights towards coaching.

Margo Geer certainly knows what it takes to be a world-class sprint freestyler, won the 2013 NCAA titles in the 50 free and the 2013/2014 titles in the 100. Internationally, she has raced for the US at Pan Pacs, Pan Ams, and Worlds, picking up a number of freestyle relay medals.

With such a turbulent year which will include 2 separate head coaching changes, it will be exciting to see how Alabama shapes out and if Geer can translate her in-pool prowess to continued success for Alabama in the sprint free.

I don’t like giving credit to a coach that quit mid season, sorry

No one asked you to like it; Coley deserves credit for what he did to develop the women’s team. The story has many twists and turns. Stay tuned…..

It still feels weird that Bama would hire Geer as the head coach while she has no upper level coaching experience while having someone like Ozzie already in their hand and clearly showing he has what it takes to be a Power 5 D1 head coach.

Perhaps the answer is that some coaches prefer just to coach and not worry about the whole adminstrative burden that comes with the head coach position? This is just my personal take on the situation with zero inside knowledge.

That’s a good point. I think that Ozzie is more than qualified and deserving of being a head coach. Maybe he just wants to coach and do the things that he excels at in his skill set. I hope he’s happy and given the opportunity to be successful. His leadership, under the circumstances, and the character of the team was impressive.

Ozzie was not given the option of being the head coach.

So the solution to that is hiring someone who has no management/administrative experience?