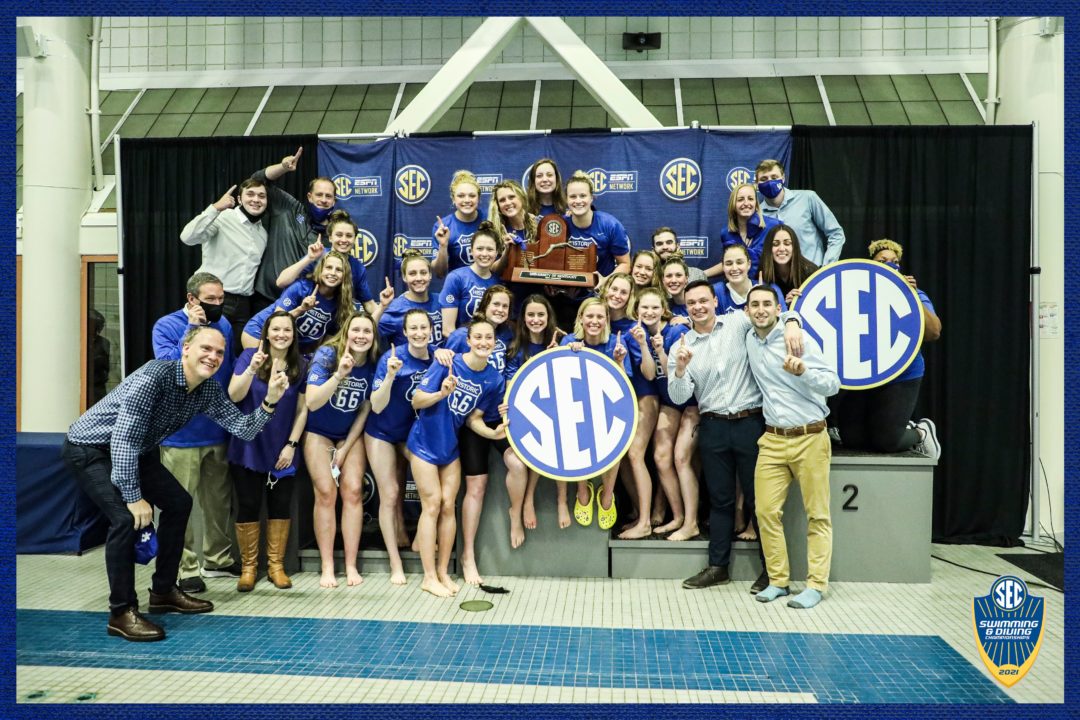 After 44 years of women's swimming in the SEC Conference, Kentucky has secured its first-ever SEC Championship title by a margin of 53 points over Florida. Current photo via SEC

The University of Kentucky has won its first-ever SEC Championships title after 40 years of women’s swimming in the SEC Conference. Tonight, their victory was by a margin of 149 points over the University of Georgia. The defending champions, Tennessee, placed 5th.

Head coach Lars Jorgenson was not present at the start of the meet on Wednesday because of a positive COVID test last week, but he arrived in time to see the team win the SEC Championship title on Saturday.

And that’s a sign of the season. In 2021, the teams that come out on the top are going to be the teams that best-managed the challenges presented by the global coronavirus pandemic. Florida entered the meet without star freestyler Leah Braswell, and on a final margin of 53 points, that could have been enough to swing the final outcome of the meet.

But you don’t get points for who does come, rather for those who show up. And Kentucky showed up in a big way this week in Athens.

Kentucky after winning the 2021 SEC Championships, courtesy of SEC

As the meet went on, the Wildcats were blowing wind into a turbine, building what turned out to be an unstoppable amount of momentum. They established a narrow lead of 2 points over Alabama on day 1. Thursday was their most challenging day as they ended the finals session in 5th place, although 2nd through 5th were separated by just 22 points.

After day 3, Florida and Kentucky separated themselves from the rest of the pack, in first and 3rd respectively, with an 8 point difference between them. Leading Kentucky’s drive on day 3 was Lauren Poole and Gillian Davey in the 400IM, finishing 1-2, Izzy Gati placing 3rd in the 100 fly, Riley Gaines winning the 200 free, Caitlin Brooks scoring 3rd place in the 100 back, and the Kentucky 400 medley cracking the top 3.

Saturday was no different for the Wildcats who finished 2-3 in the 200 back (Sophie Sorenson and Brooks) and 2nd in the 200 breast (Davey.) Going into the relay, Kentucky had already established a 103 point lead over the University of Florida.

The Wildcats achieved this victory both with swimmers who arrived on their campus as stars, like Sorenson who became the Iowa state record holder in the 100 yard back (54.61), alongside swimmers who they trained into becoming stars. For example, last year Poole finished 13th in the 200 breast and 24th in the 400IM. Brooks finished 15th in the 100 fly last year and now has jumped up to 9th with a new lifetime best.

Another major source of Kentucky’s lead was the fact that they had earned the most spots in the finals session on Friday and Saturday with 17 and 18 swimmers in the finals heats, respectively. Here is a breakdown of how many points were scored by swimmers from each school in individual events:

The majority of Kentucky’s points came from their junior class, while their senior and freshman classes scored the least. This means that the majority of the top point-scorers will be returning for the 2021-2022 season and can garner major points for the team again. Similar to Kentucky was Alabama, whose senior class scored 30 out of their 657 total points.

Got a really big team…

Congratulations UK, As a former buckeye but also resident of Williamstown Kentucky back in the 1970s and now a current swimming coach in Southern California. It is amazing to see my home states doing such an incredible job.
So proud of everyone. It almost makes me want to move back home if it weren’t for the cold weather.
Coach Jim
Paseo Aquatics, Valencia California
PATH

PS I do miss the gold star in skyline chili parlors. LOL

Last year Leah Braswell scored 53 points for the Gators. How ironic that they losses by 53 points. Would have made an even more exciting finish had she been able to go.

Always love when a school gets their first ever title. Sidebar- how crazy that Kentucky as the winning team had an 11th place relay?!

Huge congrats to Kentucky. Would have loved to see how close it could have been at the finish barring UGA DQ’s… NCAAs will be so fun to watch

DQ’s are part of the game. UK earned that win. Give them the credit without the what if’s.

You can add the DQ points back in. Doesn’t change the winning team…

This is especially impressive given that the only top 10 recruit on the entire team was Caitlyn Brooks. I think the argument about recruiting vs development is often overblown because so few swimmers have the potential to be true NCAA stars out of high school but if you want an example of a team that proves you can succeed without top tier recruits you couldn’t find a better one than Kentucky.

Have to imagine they’re gonna get a couple top tier recruits now!

I’m not a Kentucky guy, but this is so impressive! Congratulations to Lars and the UK Wildcat ladies…you made history and came out on top in what was the most challenging year ever! Nothing but respect…