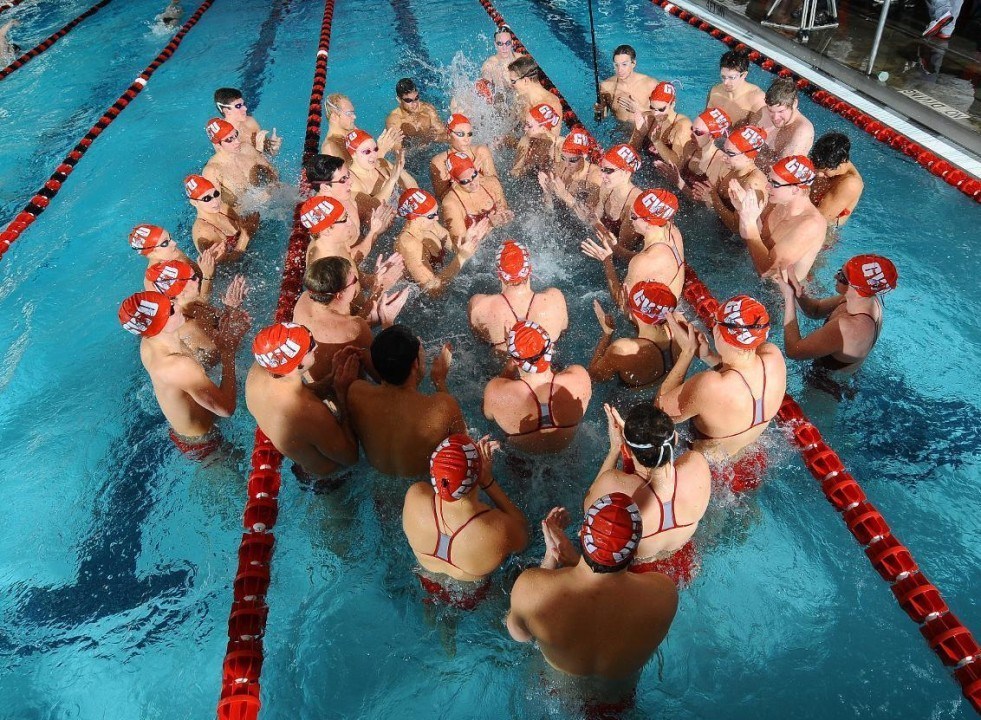 On day 2 of the 2021 Men’s CCSA Championships, Gardner-Webb extended its lead over FAU, winning both relays and 3 individual events. Archive photo via Gardner-Webb University

The second night of the 2021 Men’s CCSA Championships began in the same fashion as the first night, with a Gardner-Webb relay victory. In the absence of the reigning conference champions, Incarnate Word, the 400 medley team of Brady Fields, Johnathan Frye, Cullen Fields, and Seggio Bernardina swam to a final time of 3:15.35 to touch in first, ahead of FAU, who finished second in a time of 3:16.81.

In the 1M diving event, FAU senior Logan Downey to his second victory of the competition, coming in first with a total of 316.30 points. Notably, the field of 4 participants only consisted of FAU divers, giving the school an additional 76 points and a slight advantage in the battle for first place against Gardner-Webb.

Tim Bennett from Gardner-Webb claimed victory in the 100 butterfly, posting a time of 47.98 to drop over a second off of his season best. Bennett’s time came about a tenth off of his personal best of 47.86 that he set at last year’s CCSA Championship.

Gardner-Webb also got a victory in the 400 IM, where senior Chase Mattingly cruised past the field to finish first in a time of 3:54.65, defending his title from last season. Mattingly was also slightly off of his personal best of 3:53.52, but crushed his season best of 4:02.35.

Senior Josh Fountain from FAU won the 200 freestyle by over a second, coming into the wall with a time of 1:39.98. Fountain was the only swimmer in the field under the 1:40-barrier. His freshman teammate, Jackson Kirk, finished second overall in a time of 1:41.16.

In the 100 breaststroke, Old Dominion senior Peter Durisin picked up a victory and an NCAA B-cut in a time of 54.15. Durisin’s time was also a personal best, chopping .02 off his old time of 54.17 from his freshman year.

Brady Fields of Gardner-Webb got his second victory of the night, winning the 100 backstroke in a time of 48.70, coming in .01 faster than his backstroke split (48.71) on the 400 medley relay earlier in the day. This was also a new personal best for Fields.

Gardner-Webb has extended their lead over FAU going into the final day of the meet. However, FAU remains in contention, especially if the team has a strong day tomorrow. The battle between Bellarmine and Old Dominion for 3rd remains tight, with Bellarmine only leading by 13 points after leading by 10 points yesterday.

It’s worth noting FAU scored 152 points over 2 days in diving and now no longer have that advantage over GWU.
That means GWU has outscored FAU in swimming by almost 200 points thus far.

The diving competition is completed as of Saturday evening. The remainder of the competition’s points will be scored in swimming events.

Didn’t know getting 6th was carrying

Hush! Y’all know JConk and I have carried this team for the last two years. We wouldn’t have been swept in dual meets this year if coach would have put us in.

Brady Vann needs to pick up the pace just a little! Have fun sweetie!!