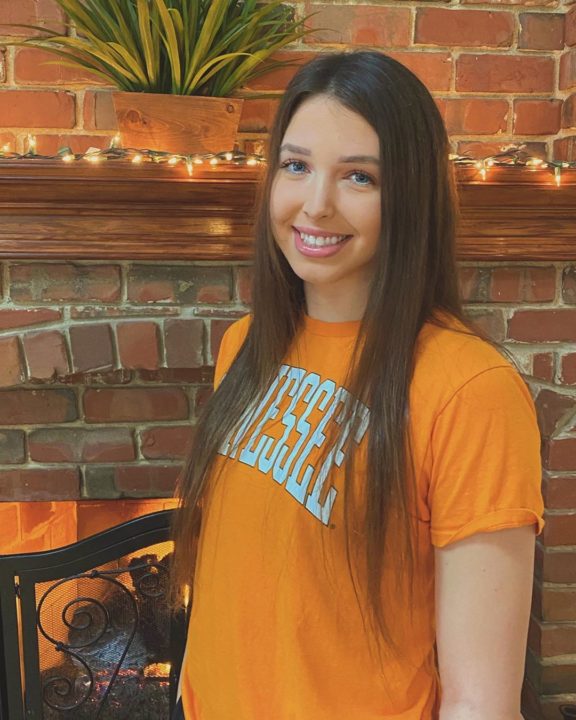 Kristen Stege shattered the previous Tennessee program record and her own lifetime best, touching the wall 1st at the SEC Championships with a time of 15:47.72. She dropped 20 seconds from her previous lifetime best which she posted in November at the UT Double Dual meet. Going into this meet, the Tennessee record was set at 15:53.39 by Amanda Nunan last season.

This swim was following her 2nd place finish in the 500 free on Thursday where she clocked another personal best time of 4:38.38. She brought home the last 50 yards in 27.25, out-touching Arkansas’ Payton Palsha by .59, and coming within 2 seconds of the Tennesee program record in that event which was also set by Nunan in 2020.

Stege swam two personal bests in the event that day, dropping 4 seconds in prelims and another second in finals. Her previous best was from the 2020 American Athletic Conference Championships where she placed 3rd as a freshman on East Carolina’s swim team.

Stege transferred from East Carolina in March after the school decided to cut their swim and dive programs. The women’s program has since been reinstated.

At East Carolina, Stege started off as a sprinter, committing to the school for the 50 and 100 freestyle.

She told SwimSwam in February that she always thought of herself as a sprinter and was scared of distance training. Then, in high school, she swam her first suited 500 free in 4:58.

In her first dual meet at ECU she requested to swim the 500, placed 2nd with a 5:01, and from then on her coaches trained her in mid-distance. It took her until she dropped nearly 15 seconds in the 500 free midseason until she saw herself as a distance swimmer.

Then, Stege broke the East Carolina and AAC Conference record in the 1650 free on her first-ever attempt at the event. She called it a “blind” mile, meaning she hadn’t been training for the event nor did she have a set strategy going into the race. Touching the wall 1st she set the new conference record at 16:11.96, holding mainly 58’s and 59’s the whole way through.

Her 1st place finish at the SEC Championships on Saturday was her 3rd official attempt at the event, and she held 56’s and 57’s most of the race. The SEC Championship meet record still stands at 15:36.52, swum by Brittany MacLean from Georgia in 2016.

Stege’s younger sister, Rachel Stege, is a U.S. National Team member who won bronze in the 400 meter free at the 2019 World Junior Championships. The younger Stege is headed to the University of Georgia in the fall.

Wow, that is one L of a story. Good for her. I think it’s the training and nutrition that helped her drop that much time in the mile.

Kinda wondering what her sprints times are like now.

This is a perfect example that just because somebody has speed, it doesn’t mean they’re a sprinter. Everybody needs speed to be successful.

Great job tonight Kristen! We are so proud of you and ur hard work!

Stege won the mile at SECs, not finished 2nd as the photo caption says. I guess her legend is even bigger now.

Anyone know which coaches coach which groups at Tennessee?
I know Huger is sprinters and Asti is men sprinters, but don’t know where all the other coaches fall.

I believe that distance Coach is Rich Murphy.

Murphy and Asti only work with the men

She seems to have blind luck. I recommend we put her in the 10k in Tokyo!