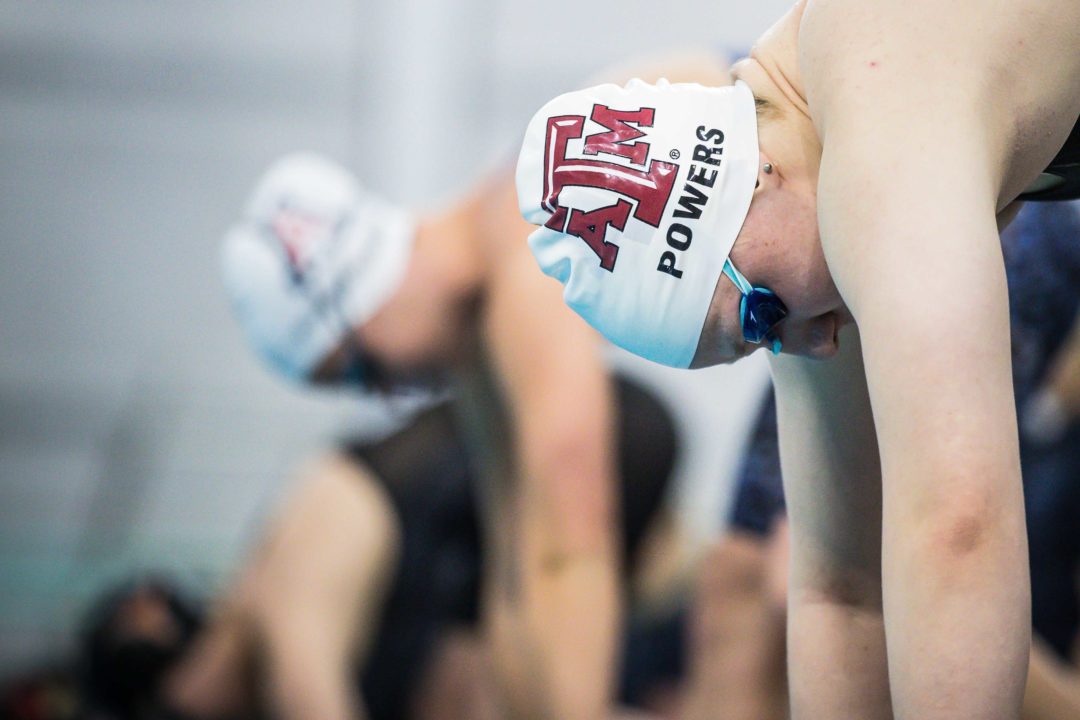 Texas A&M junior Kylie Powers injured a groin muscle in warmups before finals on Friday, causing her to add 5 seconds in the 100 breast. Archive photo via Jack Spitser/Spitser Photography

The school has not responded to a request for comment.

Powers’ 1:04.69 in the A final of the 100 breaststroke on Friday night raised eyebrows after a 59.60 in prelims brought her into the A final as the 4th seed overall.

Powers injured her groin during warmups before the finals session, though she still battled through the pain to finish the final and score 22 points for her team. Those are crucial points as the Aggies ended the session just 1 point ahead of the defending champion Tennessee Volunteers for 5th place.

Powers wound up not swimming the women’s 400 medley relay later in the session. There, the Aggies placed 7th with freshman Alaya Smith splitting 59.93 on the team’s breaststroke leg. Smith previously won the B final of the 100 breaststroke in a flat-start 59.76, so there wasn’t a huge drop-off between Powers and her.

Powers was then absent from the heat sheets on Saturday morning in the 200 breaststroke, where she was due to be the 16th seed.

Powers’ spot in the A final was a huge drop from where she entered the meet. Her 59.60 in prelims improved upon her previous best time of 59.93 from last year’s SEC Championships and knocked almost a second off her best time from this year’s meet.

More significantly, Powers’ time would have easily qualified for every NCAA Championship meet in history, though her availability will ultimately depend on the severity of the injury.

While Powers’ absence from the 200 breaststroke on Sunday is going to cost the Aggies points, it ultimately doesn’t look like it will matter. Tennessee had a very good morning session, projecting them well ahead of A&M at the final wall. A&M will have to hold off Arkansas with an 18.5-point seed advantage excluding the mile, where the two teams are seeded to score similarly.

The Achilles to a basketball player is the Groin to a breaststroker.

Ouch – a common problem with br that needs lots of rest.

I never like to see an athlete get hurt. Hope she is back to 100% by NCAAs.

She is one tough gurllll! Scored big points for the aggies!!!

Hoping & praying that you heal quickly!!