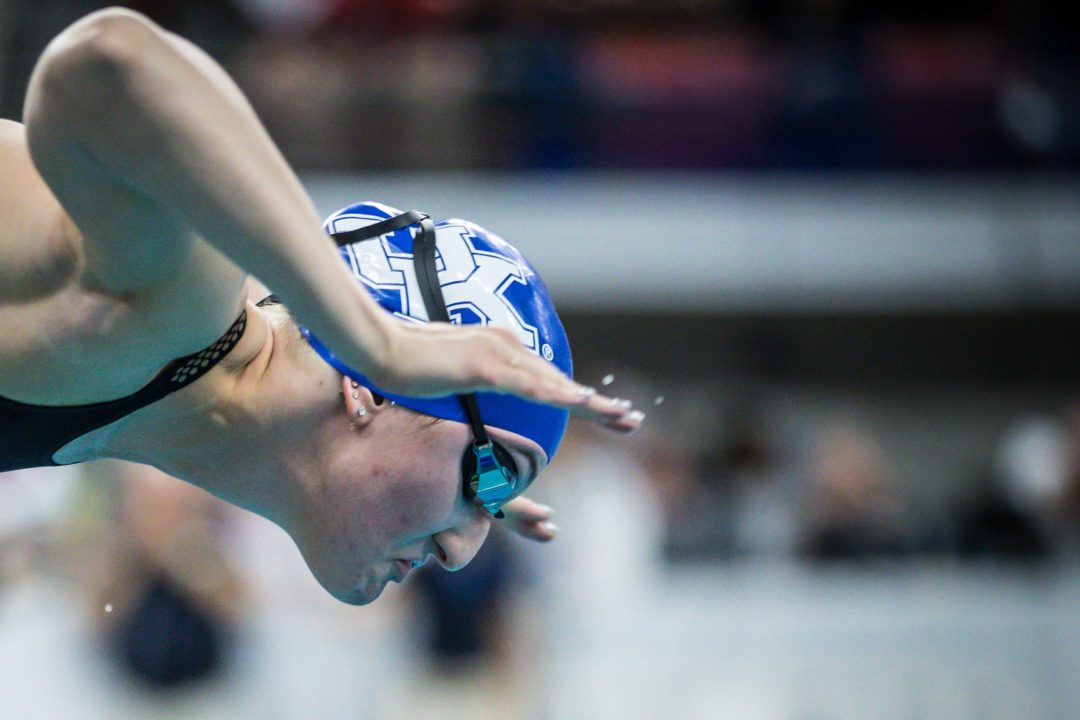 While the Florida Gators are officially in the lead, the Kentucky Wildcats are in the driver's seat after swimming lights-out in this morning's prelims. Current photo via Jack Spitser/Spitser Photography

Texas A&M junior Kylie Powers injured a groin muscle in warmups before finals on Friday, causing her to add 5 seconds in the 100 breast.

As we get going into the final session of the 2021 SEC Women’s Swimming & Diving Championships, the Florida Gators hold an 8-point lead over the Kentucky Wildcats. However, the Wildcats got the job done this morning, putting a whopping 9 swimmers into A-finals, compared to Florida’s 3. The upshot is that unless the Gators are able to dominate the 1650 this afternoon, Kentucky should win the meet by a comfortable margin.

One of the other big storylines for tonight will be last year’s individual champions looking to defend titles, as four of the five individual events will feature last year’s champions. Alabama’s Kensey McMahon (1650) and Rhyan White (200 back) and Georgia’s Dakota Luther (1:53.25) will all racing to repeat from lane 4, while last year’s 200 breast champion, Georgia’s Zoie Hartman, will be in lane 5, next to teammate Danielle Dellatorre

We said one of the storylines would be last year’s championships defending their titles, and in the first, event of the evening, last year’s champion, Kensey McMahon wasn’t quite able to repeat. Instead, Tennessee’s Kristen Stege went out fast and hung on. McMahon narrowed the gap on the second half, but it was enough, as Stege won 15:47.72 to 15:49.22, breaking a Tennessee record that was set last year by Amanda Nunan.

Florida senior Taylor Ault led with the early heats with a 16:05.09, a time that would’ve finished 6th overall year. Beyond Ault, Florida finished 4th, 7th, 9th, and 12th in the early heats, guaranteeing them that all five swimmers will score. Last year, Ault finished 7th overall with a time of 16:08.10. This is where Florida could have really used last year’s 3rd-place finisher Leah Braswell, who is out of the meet due to what Florida termed “health concerns.”

Florida should still have Elise Bauer and Tylor Mathieu in the final heat, and some big swims by them could keep the Gators in the team race, although they’d need a lot to break right to have a chance to run down the Wildcats.

Alabama’s Rhyan White defended last year title, and won her third individual event of the meet, with a dominant tonight. While she didn’t quite hit last year’s time of 1:48.15, her 1:48.55 was enough to win by well over two seconds.

The Wildcats got 2nd and 3rd place finishes from Sophie Sorenson (1:50.94) and Caitlin Brooks (1:51.96). That was a big swim for the junior Sorenson, whose previous best time was a 1:52.01 from this morning’s prelims, and that moves her to #4 in the nation, leapfrogging Brooks. Sorenson took 7th last year, while Brooks took 5th. With a total of seven finalists in this event, Kentucky now takes a 881-839 lead over Florida. Barring some combination of disastrous swims and a relay DQs, Kentucky will now almost certainly win the meet.

With 2020 champion Erika Brown having graduated, this was the only individual event of the evening not featuring a defending champion. Into the void swam Alabama’s Morgan Scott, who hit a lifetime best en route to earning the win with a 47.50. Scott transferred from Indiana after the 2019 season, meaning that, with Stege’s victory, two of tonight’s three individual champions have been transfers. This is Alabama’s first SEC title in this event since Rania Elwani won in 1996, and Scott’s time also set a new Crimson Tide record.

Georgia’s Maxine Parker took 2nd in 47.75, making her the 14th-fastest freshman ever in the event, and Alabama’s Cora Dupre (another transfer from Indiana) took 3rd in 47.90.

Georgia sophomore Zoie Hartman successfully defended her title in this event, clocking a 2:05.05 that was over a second faster than her time last year of 2:06.20, which was also her previous best time. Teammate Danielle Dellatorre took 3rd in 2:06.96, just shy of her personal best of 2:06.81 from December. That was a bit of redemption swim fro Dellatorre, who DQ’d in the 100 breast prelims yesterday.

Kentucky sophomore Gillian Davey broke up the Bulldog bash with a 2:05.59, knocking over two seconds off of her lifetime best. The Wildcats now lead 1012-898, making their lead insurmountable unless as long as they finish all of their remaining swims legally.

Alabama has moved into 3rd, leading Georgia 859-831, with Tennessee just another 3 points behind.

Kentucky’s Izzy Gati went out hard, trying to get the Wildcats their first win of the night, but she couldn’t quite hold the pace. Instead, Georgia’s Dakota Luther surged on the second half of the race, ultimately winning by over a second with a time of 1:52.04. That’s a lifetime best and a new SEC meet record for the Bulldog junior, and also moves her to #1 in the nation this season. Luther’s two SEC titles now match the two earned by her mother, Olympian Whitney Hedgepeth, when she was at Florida (although in different events).

Gati ended up 7th in 1:56.00, but that doesn’t matter too much in the overall scheme of things, as Kentucky now leads by over 100 points, meaning they could not swim the 400 free relay and still win the meet.

Barring DQs, it looks like most of the team races have been decided, with the possible exception of the battle for 7th, where Arkansas sits only 6 points behind Missouri.

With two of the top three swimmers in the 100 free, the Crimson Tide had to be considered the favorites to win this event, and sure enough, they did, throwing down a 3:10.28, the fastest time in the nation this season by a second.

All 12 teams finished legally, and Missouri took 4th to Arkansas’ 8th, meaning this relay ultimately didn’t affect the team standings, and the Kentucky Wildcats are the SEC Champions for the very first time in school history.

38
0
Reply
Observation 101
Reply to  The Importer AND Exporter

Yeah that was cringy

13
0
Reply
Snarky
Reply to  The Importer AND Exporter

Would have been nice to tell us what lap they were on in the mile.

12
-2
Reply
Guerra
Reply to  The Importer AND Exporter

The problem is that he doesn’t really pay attention to what is actually going on. He calls the races wrong consistently…very annoying.

My favorite internet crash and burn is “guy who thought he was so clever and thrifty by cutting cable but then has to beg and plead for illegal streams to watch the shows he wants to watch.”

You get what you pay for, sir.

Try yoursport.stream or yoursports.stream and try some different access points on the sec network stream

Do a 30-day free trial with youtibe tv.

Glad you are back…you have been VERY QUIET until now

The latter isn’t true, so I’m assuming the first part of that sentence is the sarcastic part? 🧐

He never stops talking but also never says anything.

SS has covered that story several times, any regular reader should be familiar with it.

Rowdy has repeatedly expressed his hatred for SS (and specifically all of us) with petty name-calling, but I dunno, just seems like basic professionalism to follow the sport you’re paid to talk about right?

My stance has always been this: Rowdy isn’t as bad as everyone makes him out to be (live TV is hard), he’s good enough for swimming (see all of the comments looking for free streams), and it’s good he was a swimmer because he’s not good enough to comment on a ‘real’ sport. He’s an average broadcaster who’s found a way to make a lot of money. Good for him.

When has he said bad things about SwimSwam? You’d think he’d be supportive of a well run swimming news site

Bobo Gigi knows more about swimming than Rowdy Gaines. Rowdy does not do his homework.

That is the impression you get listening to his commentary. That he doesn’t prepare or maybe can’t focus his mind.

After all the years he’s been on air, you would expect he would be a good commentator.

What happened to our favorite Frenchman? He was a great presence on the site

Bobo gigi, now that’s a name I haven’t heard in a long while

Could we get the obnoxious background crowd noise taken away. It’s as bad as the real screaming Florida section the other nite

Great swim from Stege! Drops about 24 seconds from her breakout mile swim last year…this is her real breakout on the national scene in a mild upset over McMahon (top seed).
Florida leads standings by 67 points after the mile. No top-3 finishes for Florida, but UK’s McNeese falls from 3rd seed to 18th. But scored prelims show Kentucky with 135 more points than Florida in individual events.

SEC camera people need to get it together.