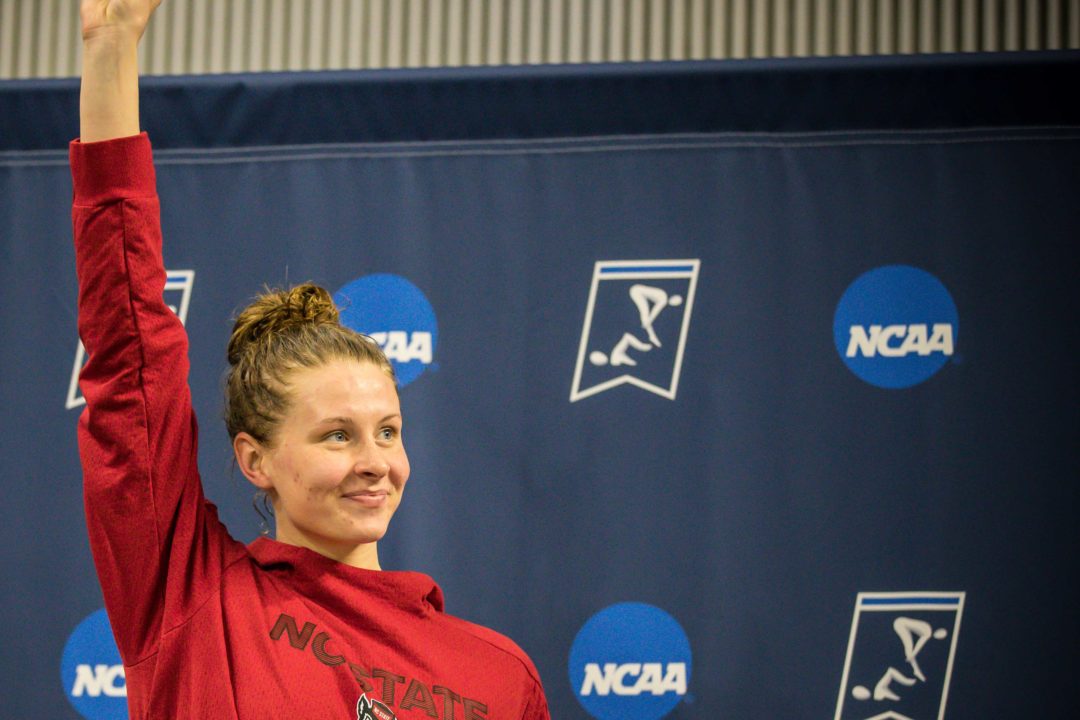 The Virginia women defended their ACC team title, earning their 17th team title in program history. UVA now has the most team titles in conference history.

Coming into this week, NC State junior Sophie Hansson owned the ACC conference and meet records in the 100 breast with a time of 57.74, the mark she’d recorded winning the event both in 2019 and 2020.

This morning, UVA junior Alexis Wenger wrested those records from Hansson with a 57.67 in prelims, but that time stood for only roughly 8 hours.

Tonight, the pair dueled it out in the middle of what proved to be one of the fastest championship final heats ever. Wenger got out to an early lead with a 27.02 split at the halfway mark, but Hansson overhauled the Cavalier down the stretch to win 57.45 to 57.60, with both women finish under Wenger’s record from this morning.

The top three finishers all hit new personal bests, as NC State junior Andrea Podmaníková broke 59 for the first time this morning with a 58.84, then dropped to 58.10 in finals to take 3rd.

With two swimmers under 58, six under 59, and the entire A-final under 60 seconds, this was one of the fastest conference championship meets ever in this event. By way of comparison, the 2018 NCAA Championships A-final had the same name of women under each of those marks, although, of course, that included all-time record holder Lilly King, who went 56.25 there before lowering the record to 55.73 the next year. Hansson and Wenger were part of that championship final in 2019, with Hansson taking 3rd in 57.90 and Wenger finishing 6th with a 58.64.

All day my money was Sophie! NCAA’s in the same pool, should be another great swim!

100 breast at NCAAs will be insane with Hansson, Wenger, Hartman, McSharry, Dobler (all 57s), also saw a ton of 58s and 59s (more to come from other conferences). Lots of depth this year though no one close to the NCAA record, but I think it might take a 56 to win.

Elendt 58.0 prior to conference will be a player

Texas women need to swim fast in March… until then, my money is on all other girls.