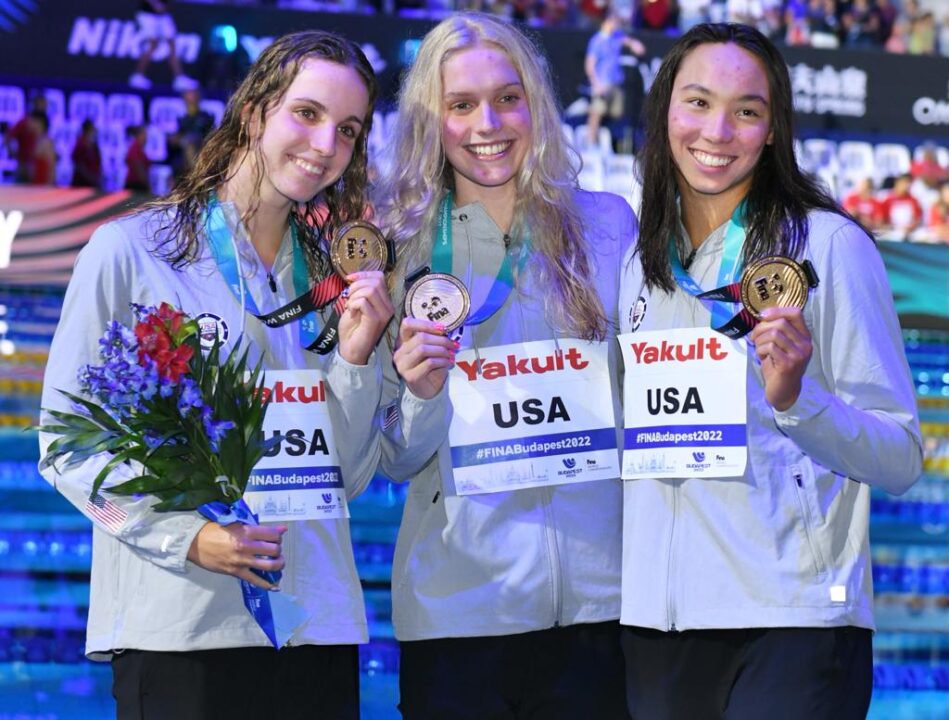 The National Team roster consists of the top-six ranked swimmers in each individual Olympic event from the U.S. inside the qualifying period (ended Aug. 31). Archive photo via Fabio Cetti

USA Swimming named 99 swimmers to its National Team Roster for the 2022-23 season on Wednesday. The qualifying period for the team came to a close at the end of August.

The National Team roster consists of the top-six ranked swimmers in each individual Olympic event from the U.S. inside the qualifying period, which began on January 1, 2022, and runs until August 31, 2022.

The 99-member team includes 46 women and 53 men, with 26 of the athletes earning selection for the first time. Last season, the roster consisted of 114 total athletes—51 women and 63 men.

“This roster showcases the strength of both our club and college systems. These athletes had strong showings nationally and internationally this past year, and we look forward to seeing them compete as we look to next year and ultimately the 2024 Paris Olympics.”

Six different swimmers are tied for having qualified for the team in the most events with five: Shaine Casas, Claire Curzan, Carson Foster, Katie Grimes, Katie Ledecky and Leah Smith. Note that one of Grimes’ five is the 10K open water event. The open water swimmers on the National Team were previously announced in May.

While there was some uncertainty about whether or not the times registered at the Duel In The Pool were official, USA Swimming is considering them to be eligible for the National Team.

While meet organizers said that Duel in the Pool times were not sanctioned, USA Swimming explained that the following criteria was used to select the team: “The six (6) athletes with the fastest times in each Individual Olympic Event, from the combined results of (i) a USA Swimming sanctioned competition, (ii) a FINA approved competition, or (iii) an international competition between January 1, 2022 through August 31, 2022, to which USA Swimming sent a team.”

Duel in the Pool would count under a literal interpretation of the third clause of that section, which was a late addition to the selection criteria (which can be seen redlined here).

In the last month, the criteria have been updated to include “an international competition between January 1, 2022 through August 31, 2022, to which USA Swimming sent a team” as an eligible qualifying event. Previously, the criteria only included “USA Swimming sanctioned” and “FINA approved” competitions.

Just over a month ago, we took a look at how the National Team roster was shaping up with only a few more high-level meets on the schedule—most notably the Duel In The Pool and the Junior Pan Pacific Championships.

While the majority of those projections stayed intact, there were a few changes.

Among the first-timers on the National Team were recent Junior Pan Pac champions Erin Gemmell and Daniel Diehl, along with members of last year’s Junior National Team such as Luke Hobson and Leah Hayes.

The pool swimmers selected will be on the National Team through September 8, 2023.

One thing I want to note, this may sound kind of irrelevant, is that Macky Hodges is now training with Sand Pipers of Nevada. She’s a 2:00 LC 200 freestyler, and considering what Ron has done with Sims and Weinstein, she could very well be in contention for a spot on future teams.

I really hope they don’t rely on Huske for relays

Anyone know when the Natl Junior team be announced?

My mother, not sure if you have heard of her, is on the junior team

Grant House is punching walls right now. They literally changed the selection criteria and bumped him off the team.

Especially from someone who’s undergoing a safesport investigation. Shouldnt be allowed on the natl team!

It’s honestly bizarre how USA Swimming is approaching that situation as compared to other similar situations. Phelps’ DUI comes to mind. It’s almost like they’re going out of their way to make him feel included.

Why do Duel in the Pool results count if those times aren’t official?

USA Swimming updated the criteria at some point to read as such: “The six (6) athletes with the fastest times in each Individual Olympic Event, from the combined results of (i) a USA Swimming sanctioned competition, (ii) a FINA approved competition, or (iii) an international competition between January 1, 2022 through August 31, 2022, to which USA Swimming sent a team.”

The only meet that meets criteria 3 but not criteria 1 or 2 is Duel in the Pool, so basically, USA Swimming decided it should count, so they tweaked the rules to make it count.

If USA Swimming wanted those results to count towards the national team they should have made it an official meet.

You ain’t getting enough cash to buy a Kubota tractor.

Assuming that rumour about the money is correct, then no, I am certain that’s not how it would work.

I will most definitely be watching the women’s meets!

BEATA IS GOING TO BE IN CONTENTION FOR SC WORLDS THIS YEAR!

I doubt Alex Walsh or Leah Smith are in for SC worlds, meaning that it will likely be Hayes and Nelson!

I could see Alex not going, but why wouldn’t Leah?

Final exams would be the obvious answer. Public high schools don’t always have the flexibility of, say, universities with those kinds of things.

Well I hope they make room for her on the team but if it’s two per event she could be the odd person out in some of her events.