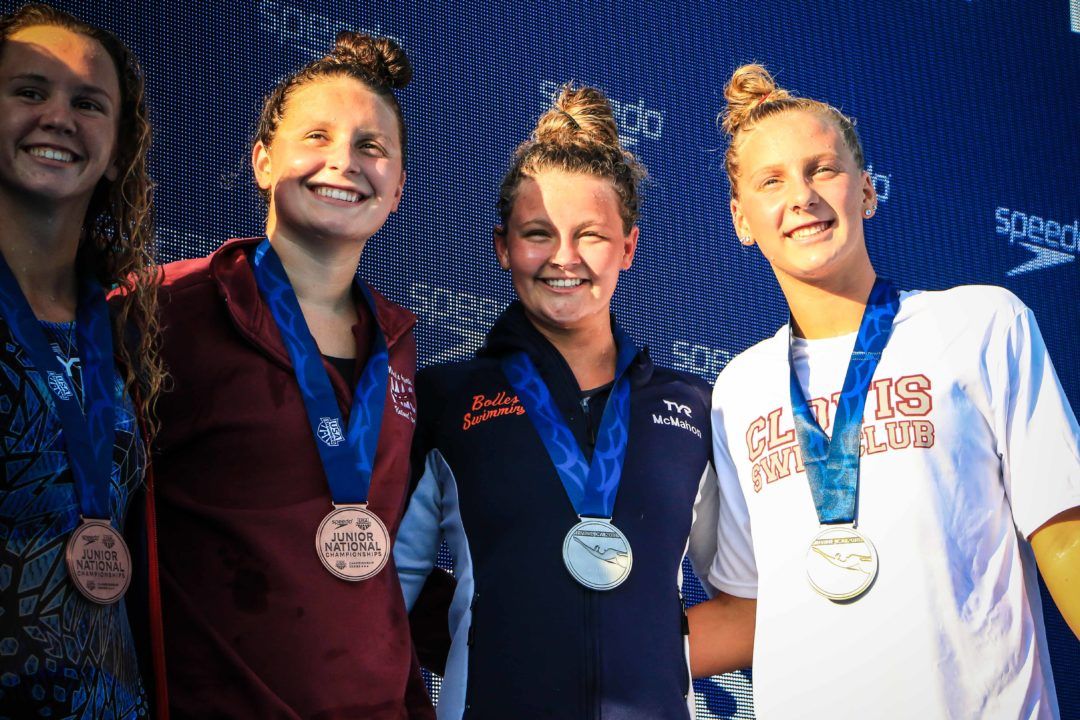 Sims confirmed the news to SwimSwam, saying she is no longer competing for Michigan and is currently in the recruiting process. Stock photo via Jack Spitser/Spitser Photography

Kaitlynn Sims, an NCAA All-American at the University of Michigan, has entered the NCAA transfer portal. Sims confirmed the news to SwimSwam, saying she is no longer competing for Michigan and is currently in the recruiting process. She’s set to graduate from Michigan in December and plans to compete for another team starting in January, as well as next season, which she’ll be able to do due to the 5th year of eligibility granted by the NCAA because of the COIVD-19 pandemic.

It’s important to note that entering the transfer portal doesn’t mean an athlete has to transfer schools, rather, it simply allows the athlete to engage in the recruiting process with other programs. That being said, Sims has indicated herself that her intention is to transfer to another school as a graduate student and use her final 2 seasons of eligibility there.

When she’s in top form, Sims is an NCAA All-American contender in both the 500 free and 1650 free and could contend for conference titles in both events in any conference. Prior to her career at Michigan, Sims earned spots on the USA Nationa Junior Team for the 2018-19 and 2019-20 seasons.

This is another example of why Indiana is the best choice in the Big Ten.

Michigan is currently honoring the anniversary of a team member taking his life, had a teammate walk off the team after Big10’s and before her Senior NCAA’s, others seeking treatment for mental distress, many complaints to AD, and pleading from athletes for help while coach get an extension… It’s pretty easy to track the story the athletes from this program are sharing from transfers, fall-offs from roster year over year, no fifth-years staying (even though they are still finishing coursework at the University – Carter).

Ohio State (7th at Summer Nationals) will continue to dominate in the Big10 when the coach is able to take good swimmers and make them great. U of M (tied for 29th at Summer… Read more »

so well said. many great points.

So McKeever = abusive but Bottom is spared of this accusation. Interesting.

I mean….what could possibly be the (gender) difference between these two?

Whelp. Apologies for the repeated paragraphs. Not sure if it is the result of multi-tasking or exasperation…

well, your facts are dead wrong, U of M did not finish one before last, and who did they make disappear?

Sorry if it wasn’t clear. I did not intend to imply the women finished one before last. They finished in a tie for 29th and the team that placed 31st had one swimmer compete.

You can review the rosters year over year…

How is UM’s distance group looking for this year?

Pretty good group returning even with the transfers. Kathryn Ackerman and Kathryn Shanley should both be top 8 at Big Tens. Won’t be their best scoring group, but will still be in the top half of events for them.

Incoming class is more focused on sprinters though, which was the bigger need. It’s a really good class when the internationals are factored in.

Don’t forget to turn off the lights….

I hear SMU just built a new aquatic center, could be the deciding factor 👀

What does she want to study in grad school?

I assume psych or MPH based on her Linkedin

Whatever it is, I’m sure the University of Florida offers it. #LedeckyGetsAnother

Doubt she wants to go that route