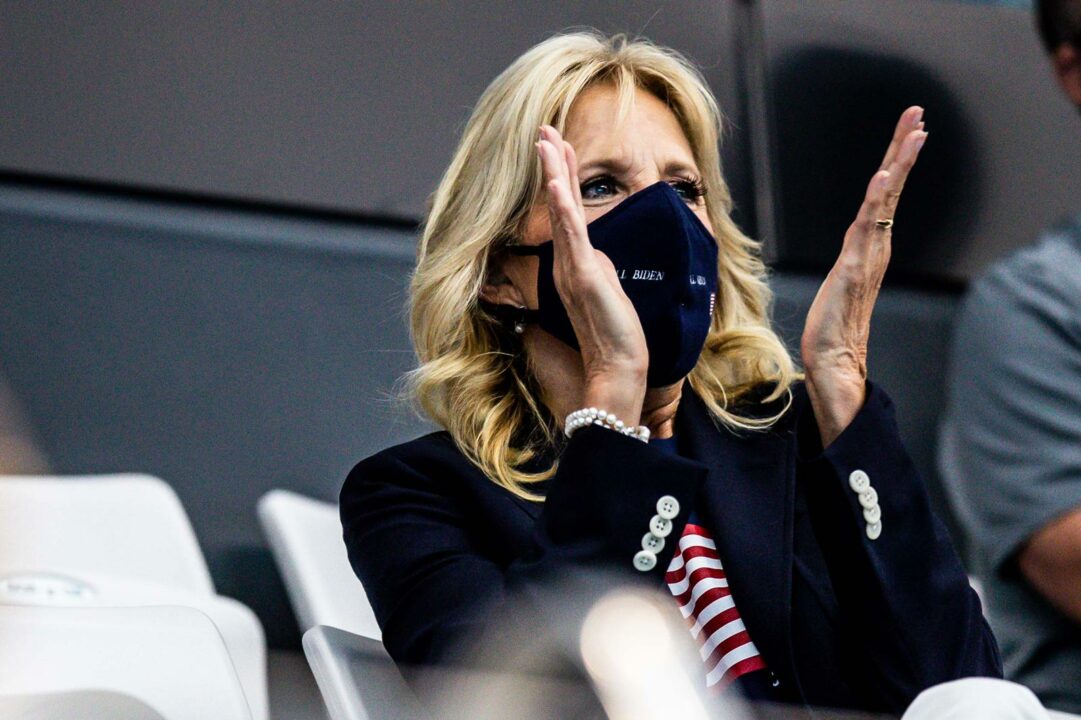 U.S. First Lady Jill Biden will attend the first prelims session of Olympic swimming in Tokyo on Saturday, according to her White House schedule. Stock photo via Jack Spitser/Spitser Photography

U.S. First Lady Dr. Jill Biden is in Tokyo for the 2020 Olympic Games and she will be watching swimming on Saturday, according to CNN.

Her schedule shows she will be at the swimming venue at 7 pm local time, in time for the first evening prelims session which will see the:

In 2012, former U.S. President Barack Obama’s decision nominated former First Lady Michelle Obama to the Presidential Delegation to attend the Games but he did not go. In 2016, Obama and the First Lady did not attend.

French President Emmanuel Macron is also in Tokyo for the Olympic Games, but his schedule has not been made public.

Macron’s Olympic schedule has not been made public.

we do not care

I think it’s great, particularly given the circumstances. First Lady there to cheer on the US swimmers. Go Team USA!

Ha! True. Is this news, that she is attending, supposed to make us more comfortable, more patriotic, both, other, neither?

In person? Thought no spectators allowed?

68
-1
Reply
Swimmingly
Reply to  Not Tapered

I have a problem with the us treating the unelected spouse like royalty. FFS even the Brits don’t elevate the PMs spouse

Would have felt the same was if Melania was sent

Did the the spouses of all the countries PMs and presidents go?

Feel even moreso when that disabled athletes mom couldn’t go, yet Dr B gets to? Boo USOC

You don’t remember when Trump was president?

Oh good, I was wondering what her plans were

How about you dine with your husband and talk about fixing the economy and getting MA vaccinated?

Talking can be a problem 😀

economy seems pretty good to me, I just got a 50k pay increase. Jobs everywhere here in the north east

If she gets to choose what she watches, pretty cool its swimming

Agree – people are so negative with these comments. There are few spectators and the First Lady is there to support the US Olympic team, and swimmers in particular. Go Team USA!

What a coincidence, I’m going to watch too! 🙄