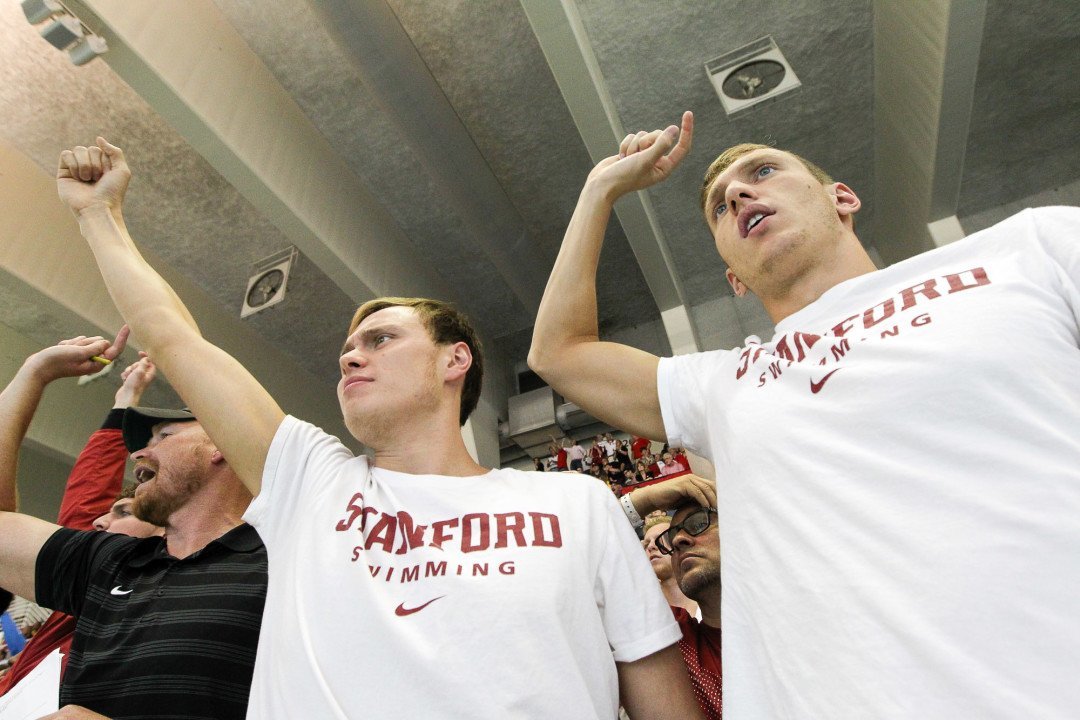 Stanford freshman True Sweetser broke a Pac-12 Meet Record that had stood for over a decade on Saturday night at the 2017 Men's Pac-12 Championships in Federal Way, Washington. Archive photo via Tim Binning/TheSwimPictures.com

Stanford freshman True Sweetser broke a Pac-12 Meet Record that had stood for over a decade on Saturday night at the 2017 Men’s Pac-12 Championships in Federal Way, Washington. In his first ever Pac-12 Championships, Sweetser secured a gold medal in the 1650 free, dominating the race with his 14:35.89. With that, he cleared the former Meet Record of 14:35.97 done by former U.S. distance star Erik Vendt at the 2003 conference meet.

Sweetser’s winning time was within a second of his personal best 14:35.03 from the 2016 Texas Invite in December. With the Cardinal now battling off Cal for the team title at this meet, his victory could help them hold on for back-to-back titles.

Behind him, teammates Grant Shoults and Liam Egan got the job done to sweep the podium for the Cardinal. Shoults dropped over 3 seconds to set his personal best at 14:50.06 en route to silver, while Egan took 3rd in 14:57.47.

That is truly sweet, sir.

US distance freestyle star 17-year-old Robert Finke swam 14.37 a few days ago.
Distance college guys should enjoy the moment right now before the young Floridian arrives in NCAA next year and rewrites the records. At Florida?

Robert Finke is a junior in high school, so he won’t swim against these guys until 2019 NCAAs

His older sister is a senior at Florida. Florida has been active in the 2018 recruiting scene with 4 verbal commits for 2018 including Trey Freeman.