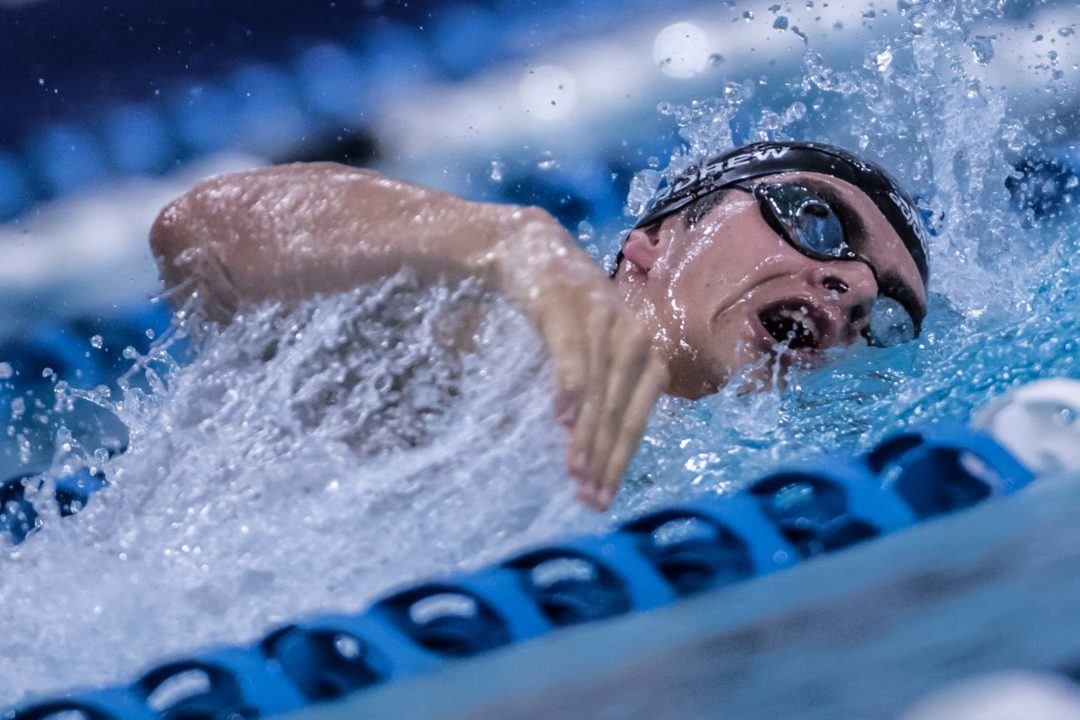 17 year-old Michael Andrew set a new world junior record tonight with a time of 1:59.12 in the 200 IM while swimming the final day of the 2017 Arena Pro Series – Indianapolis meet.  He had qualified for the finals of the 100m breast this morning, but chose to scratch that event tonight to focus on the 200 IM, and that move paid off.

Andrew’s got off to a great start tonight, building a roughly one second lead halfway through the race, but couldn’t hold off Josh Prenot, who ran Andrew down over the final meters for a narrow win.  Still, Andrew’s time lowered the existing world junior mark of 1:59.44, which was set by fellow national teamer Gunnar Bentz at the Junior World Championships back in 2013.  Andrew had previously tied that record at last summer’s Olympic Trials.

Compared to last year, Andrew took it out faster over the first two legs while going just a tad slower on the final 100.  Bentz, meanwhile, has long employed a race strategy where he has a lightning fast free leg.  He actually split a 27.9 in the finals of this event at Olympic Trials last year, while going 1:59.36 overall.

Tonight’s swim makes Andrew the 2nd fastest American ever in the 17-18 age group, behind only Michael Phelps. The four-time Olympic champion in this event swam a time of 1:55.94 back in 2003, but that was before FINA began keeping track of junior world records.

Prenot and Andrew have the top two times among US swimmers this season, and the US will be looking to some fresh faces to swim this race at this summer’s World Championships, as longtime stalwarts Michael Phelps and Ryan Lochte are retired and suspended, respectively.

Working on trying to find Bentz’s.

I wonder how tapered he is?

I thought the whole point behind the USRPT was you basically were tapered and ready to go at all times. For a kid that went pro at 14 and is about to be 18. I just assumed he would be farther along than he is. Not saying he should be perfect but there sure are ALOT of corrections that still need to be made. Most kids his age are in school full time, navigating the hoops to jump through to get to meets and still meet attendance requirements, studying for ACT or SAT, doing college applications and essays, working a part time job, volunteering, dating and then managing to get a workout in a more than likely overcrowded lane with… Read more »

He owns a world title at 17 and 3 jr WRs. He’s steadily improving and he’s proving he can perform at his best under pressure. He’s also a super friendly, caring and humble kid….an even better human being than he is a swimmer.

I am sure he is a wonderful person. Want to make it clear I wasn’t saying he was not a good person. Just pointing out I thought he would have made a bigger progression given the environment he gets to train in as compared to other kids that are often up at 4am to make a practice in a crowded lane, attending school all day and then heading back for more. Same kids are often lumped with other kids on team travel trips which is great for team but not great for recovery. MA is a team of one. Recovery tools, meals, sleep schedule is set around him which can only result in optimal recovery. And not to cast anything… Read more »

I really like MA, as a person. And this was a 200, a distance USRPT should be challenged with. Phelps was cut from distance and 200’s. For MA to step up and do so well in a 200 is big. Also, he is a serious long term relationship with god. That takes a lot of time and energy for some people. Talking to invisible people in the sky is no easy feat…

[Sarcasm]Yeah, the life of a teenage international pro athlete, with sponsorship obligations and all that, whose family has abandoned their careers to support his swimming career, is pretty simple compared to that of your average HS swimmer. [/Sarcasm]

The kid does more than practice swimming and then lounge around the house playing video games until the next practice. No, he doesn’t attend a regular school but home schooling has it’s own challenges. FWIW, he has taken some classes at nearby KU as part of his HS curriculum. Yeah, he may have his own training pool in his backyard that he doesn’t need to share, but it’s hardly a world class facility (shallow, no gutters, flexy Finis Turnmaster “bulkhead” at one… Read more »

All anyone has to do is search old times. His improvement since he was 14-15 has been very minimal. No one is debating his personality or morals. This is a swimming forum about swimming. I very much agree with Speed Racer. I have seen MA swim in person over the years and while many swimmers his age have gotten much faster and better technique, his technique looks very sloppy. And yes, you go pro, people expect more.

Clearly, he saw the 100 Breast and the 200 IM as his best opportunities to make a US Olympic/Long Course World Championship team and has focused on those two events. He’s dropped over 3.5 seconds and nearly 4.5 seconds, respectively, since his best performances in those events as a 15 year old. I’d call that more than “very minimal.” He’s passed everyone who finished ahead of him in those two events at the 2014 Junior Nationals when he was 15. With Phelps an Lochte out of the way, he seems on track to earn a spot on the US Long Course World Championship team next year in the 200 IM.

Not bad, especially considering he’s not even 18 yet. 😉

Michael’s underwaters need a lot of work. It was good that he was directly next to Josh Prenot because this showed clearly how a superb underwater swimmer (Prenot) can eat up Michael’s leads off the wall. If he had the underwaters that Josh had, Michael would have been 57 high/58 low.

Big difference in underwaters between Prenot and Andrew. I hope he can work on dolphin kick with his USRPT training.

Aside from 100 breast I’m afraid I’d have to agree. The good news is there’s still tons, and I mean tons, of room for improvement. From his underwaters to putting on more muscle to have a longer stroke… his overall technique is sound, but it could definitely use some improvement.

He needs an actual coach then

Having watched his freestyle and underwater dolphins, I would argue that his overall technique is not sound at all. Those two things must get fixed. He is immensely talented and a hard worker so the ability is there.

Gonna take some man muscles or something to get under ol Phelpsie’s 1:55.9. Another level or 3. I won’t be surprised when he does it. It may not be when we expect it, but it will come. That 100 IM in Windsor made me have alot of confidence for his future.

That’s so stupid from FINA to not take the old times as records. MP has the fastest junior time ever. And by far.
About MA, his meet was weird. His 100s were awful. His 50 free was good. And his 200 IM was very good. It would be interesting to watch an interview of him to hear if he has recently changed something in his training to take some endurance and help his 200 IM in long course.

Wish granted. 🙂
If I’ve well understood, he confirms he does more yards in training to improve his endurance.
https://www.youtube.com/watch?v=BkQuDtfrNh4

It seems to be more a matter of what the event is. Because his endurance didn’t seem to bother him with his two IM but yet his 200 free in comparison was not good at all. I think it’s because his flip turns in freestyle are so poor versus his open turns in the IM which she seems to be much more comfortable with.