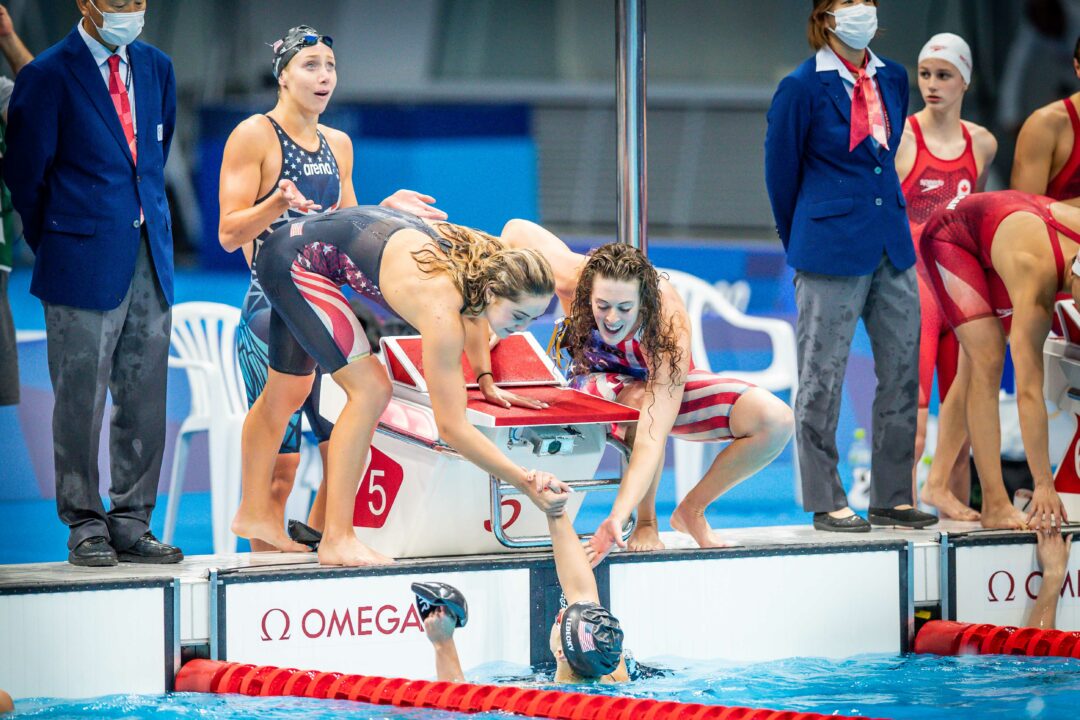 China stunned Australia, the top seed and runaway favorite in the women’s 4×200 free relay, from the opening bell. Yang Junxuan led off with the fastest first leg of 1:54.37, holding off Australia’s Ariarne Titmus (1:54.51), who a day earlier had won the gold medal in the 200 free with 1:53.50, breaking the Olympic Record that had been set by USA’s Allison Schmitt with her gold-medal performance (1:53.61) in 2012.

Titmus’ leadoff was the second-fastest, however, and kept Australia in the game with China. 14-year-old Summer McIntosh from Canada swam a very quick 1:55.74 leadoff, putting her team about .6 in front of the United States. The Americans opened with Schmitt (1:56.34) whose leadoff was about 1.7 seconds faster than the next wave of swimmers.

Katie Ledecky of the United States, who did not medal in the 200 free final on Wednesday morning, unleashed a monster 1:53.76 on the end of the American relay to power past Australia and secure the silver medal. Paige Madden (1:55.25) and Katie McLaughlin (1:55.38) also cranked out top-10 splits.

Is there a better combo than Katie McLaughlin and the 4×200 freestyle relay? Girl always pulls through!

Paige Madden great job after 400 PB early on. And McIntosh!! Almost missed that amidst Junxuan holding off Titmus but fantastic job too, even if Canada didn’t quite make medals.

If only Schmitty had swum a faster leg, hmmmm!!

After all the hand wringing prior to the race?

For the author: HUN = Hungary.

Congratulations, China. But Katie: can you say inspiring? After two 1500s, and running down the leaders, her last 5-10 meters were towering.

Swimming multiple races back to back takes its toll.

Li Bingjie failed to progress from the 200 free heats with a 1:59, after winning bronze in the 400 earlier in the day, and in the same session missed the final in the 1500. But then with some more rest drops a 1:55 here.

Yang pulled out of the individual 100 to focus on this relay, and it payed off massively. Ditto Kayla Sanchez.

The accrued fatigue for Ledecky and immediate fatigue for Zhang makes those the stand out splits for me.

The sheer guts of Zhang to take that 200 fly out at a WR pace that will always break you before you break it, knowing she had a 200 free an hour later. Incredible.

Lucky a swimmer that did what would have been faster than all but 2 flying starts last night (from a flat start) was watching.

We ( the Aussies on here)l saw it straight away, as soon as the heat sheets were released. Not sure how we knew it was playing with fire, but the coaches didn’t.

Hadn’t considered the possibility Titmus and McKeon would both have bad swims.

If they had bad swims and we lost with our strong team it would suck but that happens.

We deliberately left about a second out of the pool, then lost by 0.96