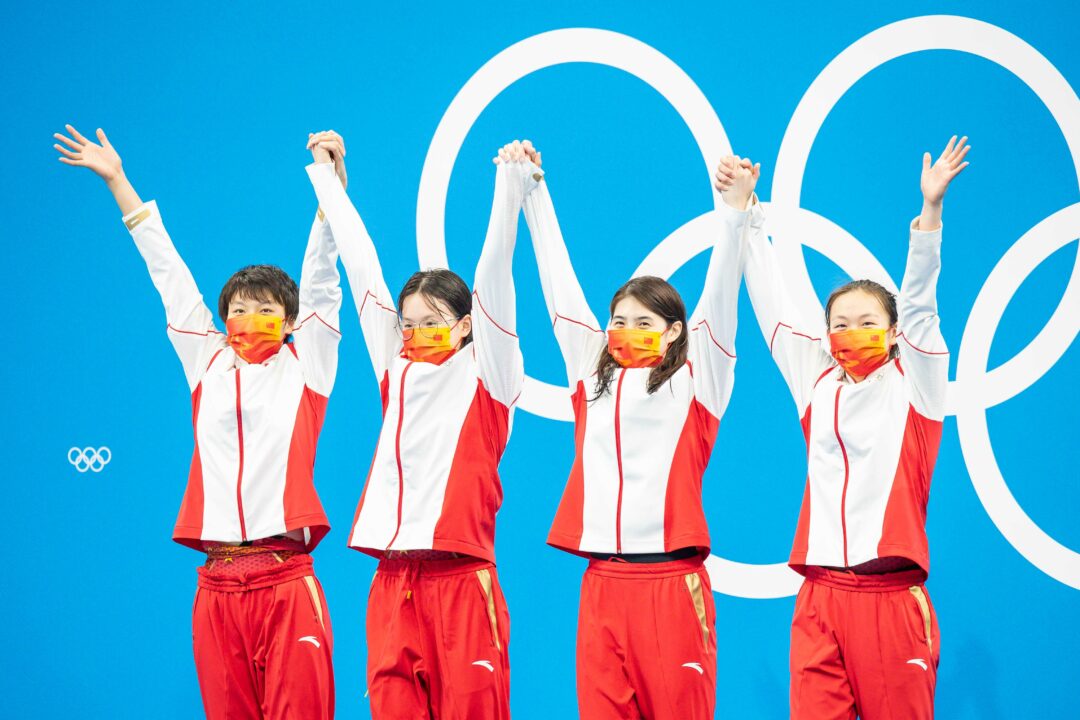 China and Japan leapfrog Canada and the Russian Olympic Committee on Day 5 to take over at the 4th and 5th positions on the medal table. Current photo via Jack Spitser/Spitser Photography

China stole the show on Day 5 of the 2020 Tokyo Summer Olympic Games. Of the five gold medals awarded on Thursday morning, two went to China. Both came with Olympic Records.

Zhang Yufei began with a dominant win in the women’s 200 fly. After leading the field through the heats and semis and improving her time with each swim, she won the final in 2:03.86 to break the Olympic Record of 2:04.06, set by countrywoman Jiao Liuyang in 2012.

Italy earned their second silver medal with Gregorio Paltrinieri’s second-place finish in the 800 free (7:42.11). Netherlands, also, picked up their second silver with Arno Kamminga’s 2:07.01 in the 200 breast. Kliment Kolesnikov gave the Russian Olympic Committed their only medal of the day, a bronze from the men’s 100 free (47.44).

Mykhailo Romanchuk put Ukraine on the leaderboard with a bronze medal in the 800 free (7:42.33). Finland also scored their first swimming medal of the Tokyo Games: a bronze in the final of the men’s 200 breast for Matti Mattson (2:07.13).

While the top three teams (USA, Australia, and Great Britain) didn’t budge, Day 5 saw China and Japan leapfrog Canada and the Russian Olympic Committee to take over at the 4th and 5th positions. USA may have fewer gold medals than they had after five days in 2016, but their overall medal count is the same. Australia and Great Britain are outpacing their 2016 selves by a generous margin, through the first five days of competition.