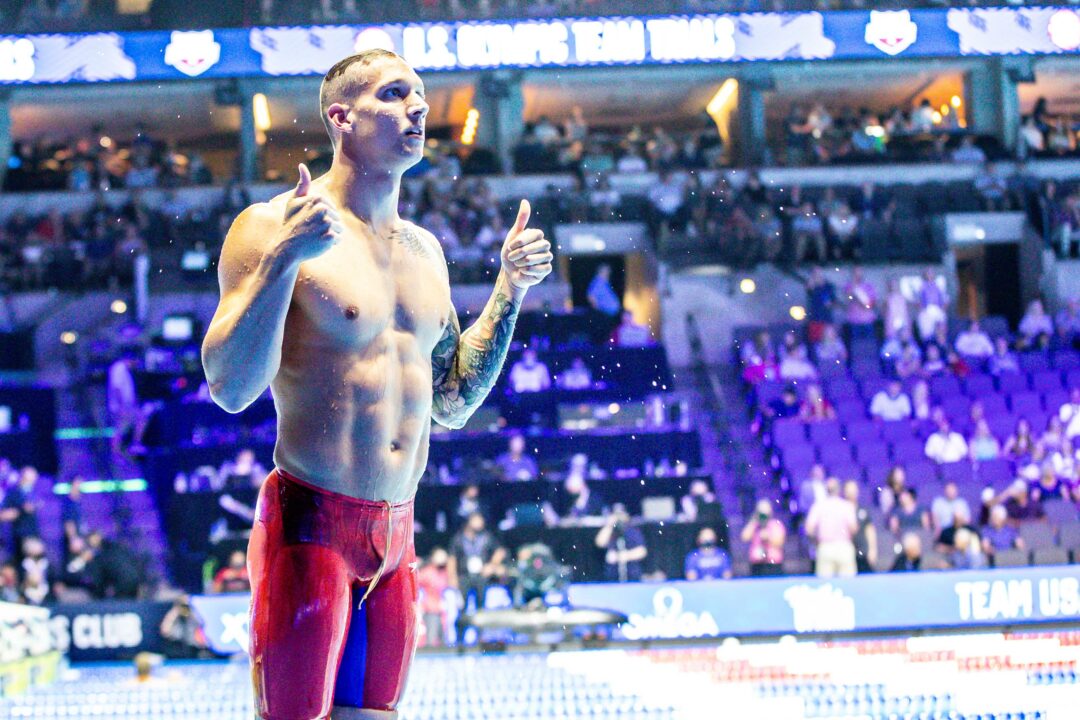 Caeleb Dressel will head into the Tokyo Olympics as the fastest entrant in the men's 50 and 100 freestyles, and 100 butterfly. Archive photo via Jack Spitser/Spitser Photography

While we don’t yet have access to the official Tokyo 2020 swimming psych sheets, we have compiled a version of what they will probably look like based on entry lists released earlier this month.

The psych sheets don’t reveal anything new as we’ve had access to the entry lists for over a week but they allow us to easily draw upon information and compare events. The one difference you will note from the entries to the psych sheets is the removal of Russia’s Ilya Borodin from both the 200 and 400 IM due to his recent withdrawal from the Games due to a positive COVID-19 test.

As expected, the sprint freestyles have the highest number of entries with 72 men scheduled to race the 50 and 73 in the 100. At the other end of the freestyle spectrum, the 1500 holds the least number of entrants overall with only 28 men set to race the event as it makes its Olympic debut.

One surprising stat is the fact that the men’s 200 backstroke only has 29 entries, making it the second-least populated event after the 1500. That’s roughly 2/3 the number of entrants in the 100 backstroke and less than the 200 breast, 200 butterfly, and 200 IM which will feature 40, 38, and 45 swimmers, respectively.

Taking a look at the top seeds, Caeleb Dressel holds the most of any individual man at 3 (50 free, 100 free, 100 fly) while Gregorio Paltrinieri and Evgeny Rylov each hold 2 of their own in the 800/1500 freestyles and 100/200 backstrokes, respectively.

Dressel’s 3 combines with Michael Andrew‘s top time in the 200 IM give the USA a total of 4 top seeds which is the most by any country. The Russian Olympic Committee holds 3 courtesy of Rylov in the backstrokes and Anton Chupkov in the 200 breaststroke. Paltrinieri’s 2 events make Italy third on the list and the only other country with more than 1 top seed.

5 other countries have a top seed in one event in the form of Lithuania, Australia, Great Britain, Hungary, and Japan.

Where are the women’s psyche sheets?

Where can I find the women’s psych sheets?

Why is Dressel ‘s top seeds count 2 instead of three?

..wrong gender for this statement?

Anyone who looks at this and doesn’t think the USA will dominate is quite frankly a moron!!!! USA USA USA!!!!

So call me a moron then mate cause MUrica won’t dominate.

Nobody else stands a chance Joel!! It’s just the truth.

Dude this is just embarrassing. Like, everyone likes a lively discussion and we expect a little bias towards your own country. But comments like this add absolutely nothing and make you look silly.

Australia has more #1 seeds than the US overall and you don’t see us acting like this.

Aussie men need to be carried by their Sheilas though.

They’re only hero’s in the US if they can run 4.2 or shoot hoops.

DK Metcalf is a hero

no Australian touts their team cuz they always choke at the olympics.

There’s a few issues with this:

1. Aussies don’t act cocky because they’ve got a bit of tact and humility. It’s not normal in the vast majority of the world to constantly try to tell other people you’re better than them.

2. Aussies don’t always choke at the Olympics. They’ve performed below expectations for two Olympics (still managed to finish 2nd in the medal tally in Rio). The last one before that they did really well. The biggest choker was Katie Hoff who got 0/4 predicted golds. But Aussies don’t bring her up all the time because it’s pretty tactless and rude.

If you think it’s normal to just shit on every country that isn’t yours, and you think… Read more »

Dude the U.S. men have a shot at 4 (CD + MA), maybe 5 individual golds if Murph can rein in Rylov/Kolesnikov in either backstroke. And it’s not much better for the women.

“Was that good enough Mom?”

Every age group coach knows this pose.. Not enough likes…

The Longhorn hate for Dressel has cooled after the last 3 years of making him look silly.