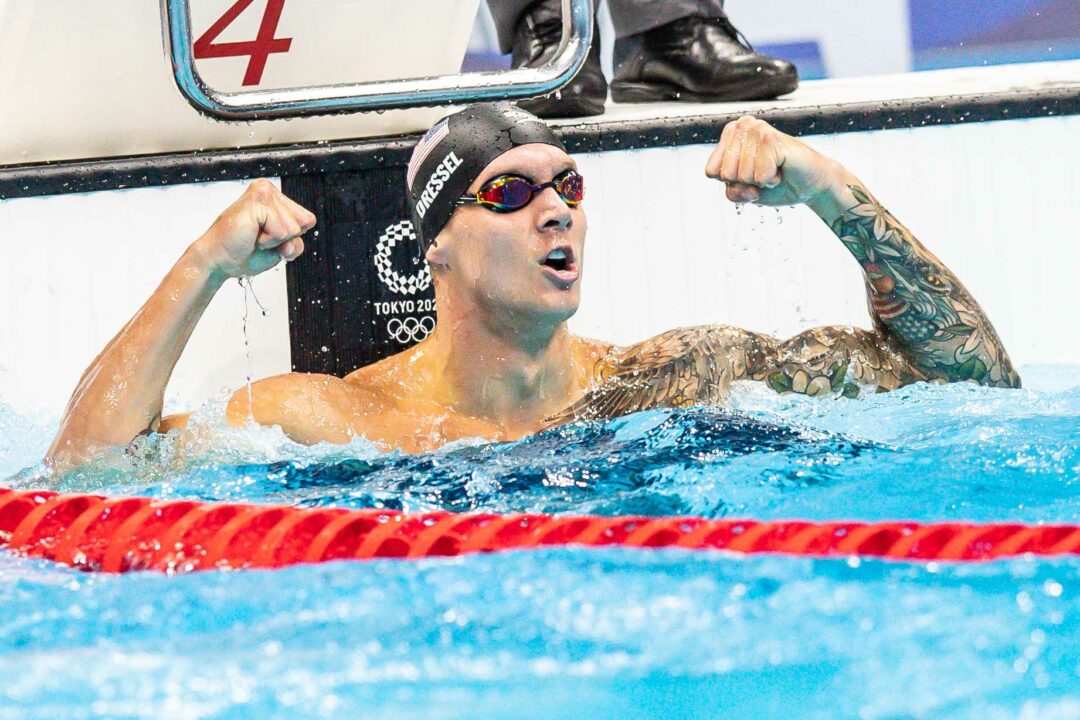 For the last day of the 2020 Olympic Games, we brought you our Top 10 swims from Tokyo, Top 5 for men and Top 5 for women Current photo via Jack Spitser/Spitser Photography

For the last day of Olympic competition, we are bringing you SwimSwam’s Top 10 races of the meet, broken into the Top 5 on the women’s and men’s sides.

#5 – 100 Breast: Coming in, defending champion Lilly King looked like the favorite. But it was South Africa’s Tatjana Schoenmaker with the surprising speed going out and USA’s Lydia Jacoby coming home. 17-year-old Jacoby touched first at 1:04.95 for gold and a new national age group record to boot.

#4 – 100 Fly: This race was as tight as they get, with finishers 1-4 touching just .14 within each other. At the wall, it was Maggie MacNeil at 55.59 who backed up her world title, followed by China’s Zhang Yufei and Australia’s Emma McKeon.

#3 – 100 Back: Billed as one of the toughest fields of the competition, this race delivered, seeing 3 heavyweights in Regan Smith, Kylie Masse, and Kaylee Mckeown go head-to-head. McKeown would come out on top, touching in an Olympic record of 57.48, with Masse 2nd and Smith 3rd.

#2 – 200 Breast: After her stellar 100, Schoenmaker was back in the 200, ultimately recording the #1,3, and 4 times in history throughout prelims, semis and finals, taking gold in that final heat with a world record of 2:18.95. But perhaps the best part of the race the was tremendous act of sportsmanship we saw after, as the two Americans and 2 South Africans all embraced and congratulated one another on their brilliant showings.

#1 – 400 Free: We knew we were going to see Ariarne Titmus and Katie Ledecky duke it out in 3 rounds in Tokyo and with Round 1 being the middle ground for the two athletes, it ended up being the most riveting. Ledecky was out strong, leading through 300 meters, but then Titmus made her move, pulling even at the 350 and pulling ahead down the stretch. Titmus would touch first in 3:56.69, the #2 performance of all-time. Ledecky touched for silver in HER #2 swim of all-time, 3:57.36.

Coming into this race, I don’t think anyone called Australia not obliterating the field. But after the lead-off leg, it was China who had a slight lead, which they were able to maintain as they battled back-and-fourth with Australia through 3 legs. USA was lurking in 3rd, a body length behind the two teams but still in the race. Enter anchor legs.

Katie Ledecky split a 1:53.7 on the end for USA to pull ahead of Australia and nearly rundown China, but it was China’s Li Bingjie who held on and touched first in a new world record of 7:40.33, while USA touched 2nd in a new American record of 7:40.77. Australia touched 3rd at 7:41.29, a new Oceanian record, and all 3 teams ended up dipping under the old world record set by Australia in 2019.

#5 – 200 IM: Michael Andrew came in as the heavy favorite and was out at the 150 first as expected. But it didn’t end up being enough as the field closed on him in the freestyle. It came down to a 2-man race, as China’s Wang Shun and Britain’s Duncan Scott fought for victory, Wang ultimately touching for gold at 1:55.00 for a new Asian record, making him the #3 performer all-time.

#4 – 800 Free: In the first event of the Games where we saw distance heavyweights go at it, the first Olympic iteration of the men’s 800 brought the heat. 1500 defending Olympic champ Greg Paltrinieri was out wayyy ahead of the field, daring the rest to come and catch him. Mykhailo Romanchuk and Florian Wellbrock were up to the challenge, making up ground rapidly in the 2nd half of the race with Bobby Finke lurking in 4th, even through the 750 wall. However, it was Finke who came home in a massive 26.3, passing all 3 competitors to touch for gold in a new American record of 7:41.87.

#3 – 100 Fly: Most thought this would be Caeleb Dressel‘s race, but Kristof Milak had other plans. In what was a very Phelpsian performance, Milak ate up ground coming down the home stretch, nearly passing Dressel and touching for 2nd at 49.62, becoming the #2 performer all-time. But it was Dressel who got his hand to the wall first in 49.45 for a new world record.

#2 – 400 Free: The name Ahmed Hafnaoui will now be synonymous with Olympic glory, whereas before this race most of the world was unaware of his existence. Barely making it through the prelims and qualifying 8th, Ahmed shot his shot in the final, taking his race out strong and never looking back. Although the field started closing in on him the last 100, Hafnaoui held on for gold, netting the 18-year-old Tunisia’s lone Olympic medal in the pool for these Games.

#1 – 100 Free: In what was billed could be the Race of the Century coming into these Games, the men’s 100 free was exactly that. In a historically fast heat, Caeleb Dressel was out fast, Kliment Kolesnikov right behind and Chalmers lurking from 2 lanes over. Chalmers did what he does best, eating up ground with each stroke on the 2nd 50 but ultimately running out of room. Dressel touched first at 47.02 for a new Olympic record and his first (of what would be 3) individual golds.

We knew this would be race between USA and Great Britain… but what we didn’t know is that there would be 3 lanes between them, and USA would be swimming out of Lane 1. However, it didn’t seem to matter for the Americans as they were able to go it fast enough on the front half to keep themselves within distance of Britain after Adam Peaty‘s incredible 56.5 breast split.

Dressel countered with his own historic split on butterfly, going 49.0 to give Zach Apple clean water to bring it home. Apple split 46.9 and touched for first in a new world record of 3:26.78, continuing USA’s undefeated streak in this event at the Olympics.

What are your Top 10 race of the Games? We want to hear them!

While it was undeniably an awesome race, I think the trajectory of it was a little more expected because of seeing the 800. i went with the 800 because we had no idea how it would play out and I think most of us were shocked by the roller coaster it took us on

Dan hicks call on the 800 was also hype AF

I agree with that and I predicted the top 3 after the 800 but the 1500 was even more exciting because I thought that the same trick can’t be pulled twice but Finke played us all!

800 Free was the EASILY the best race of the whole Olympics.

What race shocked you the most and made you rise up out of your chair?

Using your criteria it’s the 400 for me

My good friend who has never watched swimming and laughs when I mention it as a sport texted me with the following: “BOBBY FINKE!!!”

Yes those 4 swimmers were so close!

thank you for the Olympics coverage! The countdown to ISL begins

It may be an unpopular opinion but I think Michael Andrew had a great Olympics despite the disappointments. Why ?

Because he is a sprinter, an excellent one, and I dare EVERYONE here to say that 6 months ago his only shot to make the team was not the 50 free. We all expected him to have chances only via 50 free.
Then he did what NONE of us tought : winning the 100 breast ( AMERICAN RECORD btw ) and 200im.
Yes, those 2 disappointed and could be better, but only because of the unexpected hype he generated at Trials.

No. It wasn’t a great Olympics for him.

But he got a gold medal in the relay that set a world record.

So he finished on a happy note at least.

You cannot call his 100 Breast is a disappointment. However, if he would like to sit on the top of 200IM, he has to change to way he trains. Many people has critics on him not just because he had a bad swim in 2IM, instead, he is so talented and people has high expectation on him. He could do it.

I don’t necessarily think he HAS to change the way he trains. If he repeated his time from Trials at the Olympic Final we’d be talking about this way differently…I do think he needs some definite technique improvements though.

I think this is more of an argument for him having a good trials. Saying that no one expected him to qualify for other events but then him winning trials has nothing to do with his performance at the Olympics.

0 individual medals out of 3 events where he had a realistic shot to medal, as well as one event where he was the favourite. Breaking the medley record is a great end for him, and his split was fine, but it was mainly driven by Caeleb pulling out a beast split.

Agree with this. His Trials was a great meet, but he was slower here. Hard not to say that’s not “disappointing” in a sense. I think his 2 IM was actually bad here, considering how he got slower every round and looked like he was actually dead in the final. (I wanna get one of those fancy race breakdowns that have like, “turn time” in it – felt like he was physically on the walls twice as long as the rest of the field.)

“MA had a good meet here’s why:

He had a good trials meet”

Finaled in three totally different individual events and win Olympic gold and a WR from lane 1. He had an amazing meet, don’t be stupid. I’m not an MA fan boy but come on this is ridiculous

In the 100 free, Dressel going into another gear down the stretch just as it looked like he was going to be caught by Chalmers. And then hitting the finish to win.

Most vivid moment of Olympic swimming for me.

I think this is true. But I also think Chalmers taking a break on the 2nd to last stroke honestly could have been the difference in the race.

The things keeping men’s 400 IM off this list are: 1) the pedestrian finals times, 2) the intense fight was actually for the minor medals more than the gold.

For some odd reason, I never find the men’s backstroke events to be riveting at Worlds or Olympics, no matter how close/fast the times are.

Women’s 2 IM was less interesting for me because the world number 1 leading in wasn’t in it.