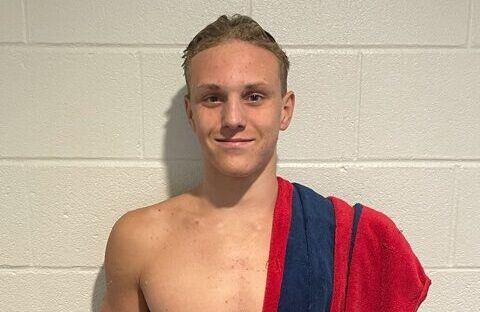 Williamson's previous best had him 9th all-time in the 13-14 200 back rankings, and his new time puts him 8th, jumping over Michael Andrew. Stock photo via Shannon Pritchett

On the final day of the West Fargo Futures meet, 14-year-old North Texas Nadadores’ Maximus Williamson continued having a phenomenal meet. Williamson won the men’s 200 back in 2:03.69. The swim was a personal best by half a second, as he entered the meet with a best of 2:04.11, which he swam just last weekend.

Northern Lights Swimming Association 18-year-old Eric Anderson won the men’s 50 free, though he was well off his personal best. Anderson clocked a 23.26 to win the race by half a second. The time, however, was 0.69 seconds off his personal best of 22.57, which he swam in June at the U.S. Olympic Trials Wave I meet.

KATY’s Tyler Kopp swam a 2:05.46 to win the men’s 200 IM, dipping under his previous best of 2:05.59, which he swam 2 months ago. Despite Kopp being primarily a freestyler, it was the backstroke leg where he made his move on the field in this race.

Nasa Wildcat Aquatics 17-year-old Carly Novelline clocked a 26.13 to win the women’s 50 free by 0.01 seconds over Madison Aquatic Club’s Sophie Fiske. Novelline’s swim was well off her personal best of 25.46, which she swam in March of this year. Fiske was also off her best of 25.79, which she swam at the U.S. Olympic Trials Wave I meet in June.