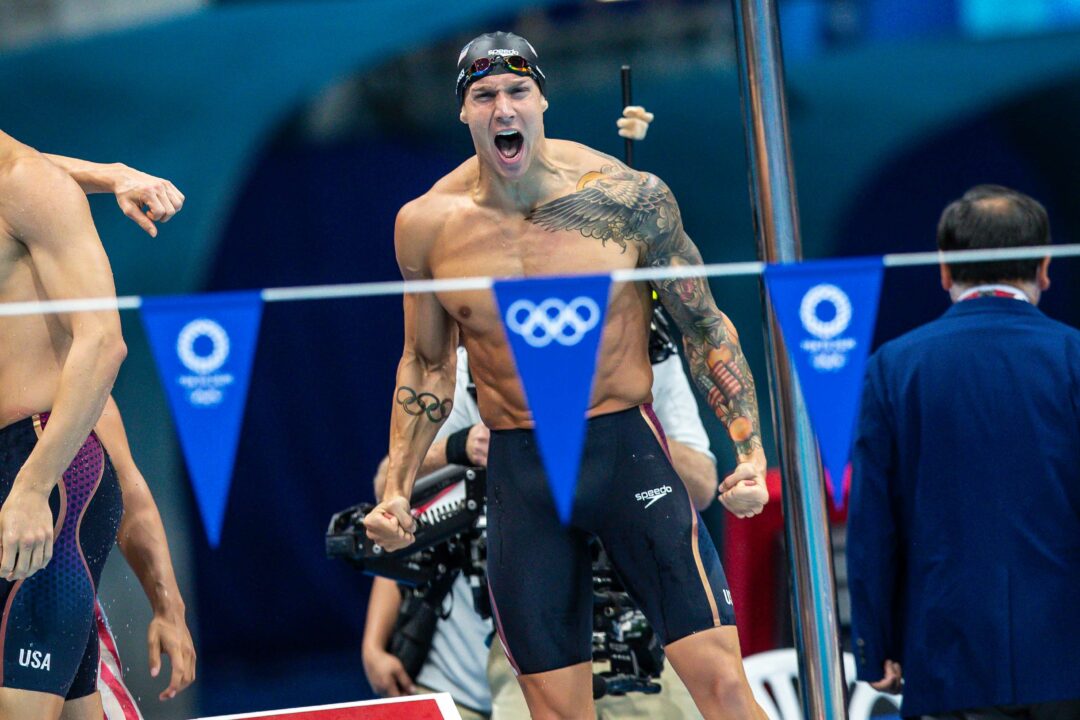 Caeleb Dressel recorded the fastest 100 fly relay split of all-time in 49.03, propelling the Americans to a new world record in the men's 400 medley relay. Current photo via Jack Spitser/Spitser Photography

The final race of the Olympic swimming program in Tokyo was one for the ages, as the United States and Great Britain had an epic duel in the men’s 400 medley relay, culminating with a new world record for the Americans in 3:26.78.

The Brits lowered the European Record in 3:27.51, as the heat saw two of the three-fastest performances ever recorded.

A major reason for both of those records going down was the unbelievable splits thrown down by Caeleb Dressel and Adam Peaty, as Dressel recorded the #1 butterfly split of all-time and Peaty registered the fastest breast split we’ve ever seen.

Rylov was way off on his leg of the relay. If you’re using the fastest relay splits for each of the strokes Murphy is still the guy

0
0
Reply
Bub
Reply to  another Tomek

Is Adam Peaty the greatest male 100m breastroker of all time?

Yes. Has been for a long time and it’s not close.

He’s so ridiculously good at the 100 you can argue he is greatest overall breaststroker though I lean Jima still.

I’d lean toward Peaty. The thing with Kitajima, is that he was losing to Hansen half the time, he just happened to win the the four races that people care about (and 2004 is questionable because of the dolphin-kick controversy). He never had the dominance that Peaty has had these past 6 years

Peaty doesn’t even swim half of the breaststroke races at the Olympics, sorta feels disqualifying to me. (It’s the exact reason I was like, super miffed when I heard of “Project Immortal.” Like, ok dude, sure sure.)

To be fair though, it wasn’t like Kitajima was swimming the 50 Breast either, which is basically at every competition besides the Olympics. Most great breaststrokers are now either swimming 100/200 or 50/100 (if they can swim multiple events). Gonna take a very special swimmer to be great at all 3. Kitajima always had a rival who was beating him half the time, great but not the clear greatest. Peaty’s only competition that came close was Cameron Van Der Burgh in the the 50.

Yeah I guess Peaty is better at the 50 than I realized, I thought he had mostly fairly close races there but they’ve sorta been blowouts since 2015. (I was thinking he was more like Phelps in the 100 fly, where like, ya he’s prolly gonna win but also it’s gonna be close.)

But because the 50s aren’t at the Olympics, feel like it’s hard to base all-time greatness on them. When it comes to writing all-timer resumes, I feel like the Olympics are 90% of it.

That relay carried MA. Unless he changes his training, this gold and world record will be the pinnacle of his career.

I’m not a USRPT guy, but this is getting silly.

The guy is a great swimmer, one of the absolute best in the world.

I love the salt. You haters are struggling to cope! The relay won by so much they could have swapped out Zapple for Becker and also won. Even Hunter could have replaced Murphy if he was at his trials time. Just because they could have won with different swimmers doesn’t mean they were carried. They all worked together to get the fastest time ever! Literally couldn’t have done that time with any other group of Americans.

Only one of them wasn’t the fastest split in their respective strokes. Guess who it was?

Only one of them had to swim against the fastest breaststroker of all time, Guess who it was

The guy who had to compete against Adam peaty? The same Adam peaty that went 56 before anyone else had even broken 58? Of course he was slower than him. MA did (and said) many things that earned valid criticism this week but being slower than Peaty isn’t one of them

While this is an anonymous forum, this kind of comment is what makes me crack up. Can’t even check your facts, but spew opinion that no one cares about. Check your facts, nope you are wrong on fastest splits. But to answer your question, the answer you are seeking is the American Record Holder in the 100 breastroke.

What a great race! Great fastest splits from Peaty and Dressel. Great way to end the swimming Olympics. And I feel happy for Michael Andrew. I’m sure he’s got to be disappointed in his individual results, BUT…he ended with a Gold medal and helped with that World Record. Some redemption there!!

Amazing way to finish off for the U.S. The next few years leading into Paris are going to be interesting!

In three years all of the teens will have matured and will be 19-22. US can be way better

As for Dressel, what more can be said? Pulling a 49.0 after the programme he’s had, when his team needed it most.