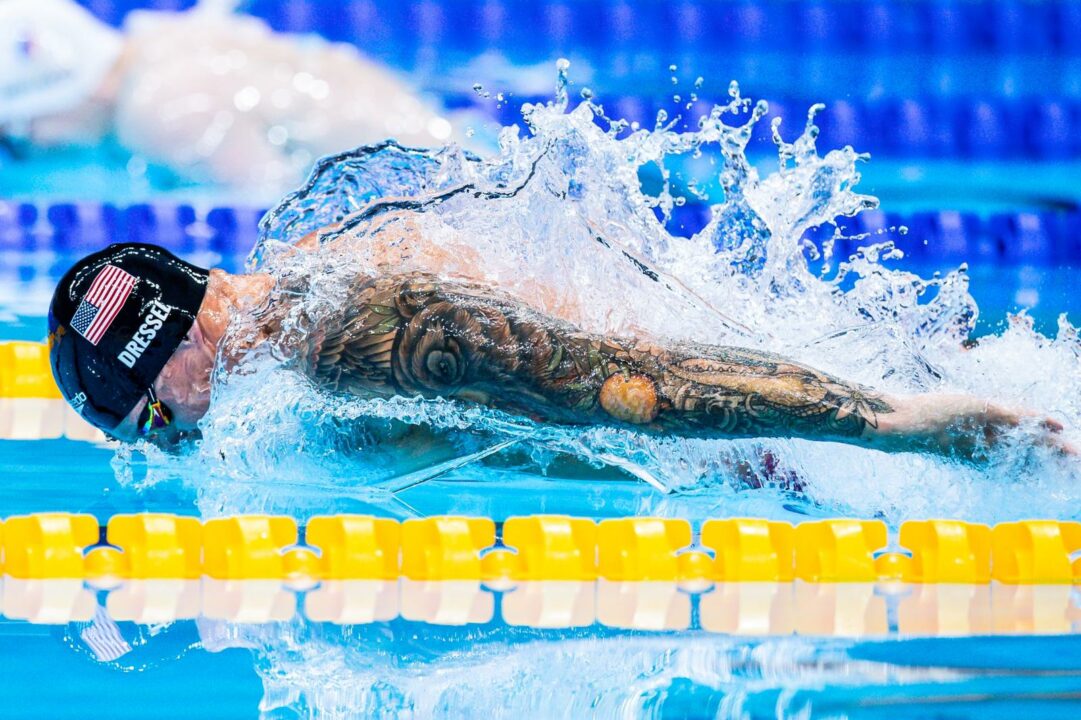 Kristof Milak was 2nd in 49.68, setting a new European Record in the process. The old European Record belonged to Milorad Cavic, who was 2nd to Michael Phelps at the 2009 World Championship final in 49.95.

Milak is now the #2 performer of all-time in the event. Like Dressel, he also broke his own National record: the previous Hungarian Record was the 50.18 that he swam at May’s European Championships.

His time is the 4th best performance in history as well.

Both swimmers are now faster than Michael Phelps, the former World Record holder and the most-decorated swimmer in history.

That mark’s Dressel’s first personal best time of the meet where many swimmers have won races without bests.

Dressel was out more conservatively, behind the World Record line at the turn, but his training paid off late as he came back fast.

The same was true of Milak, but even moreso. The man who won the 200 fly already in the meet had plenty on the finish, and very-nearly ran down Dressel’s sure lead, splitting 26.0 on the last 50 meters.

Dressel’s is the 2nd individual World Record and the 4th World Record overall in swimming so far at these Olympics.

Here’s how that stacks up against prior Olympic Games:

*In 2008, special suits made partially of polyurethane were allowed, leading to a rush of World Records. This would continue through the end of 2009, when the suits were outlawed.

Isn’t that what Schooling went out in here?

Milak made me spit out my yogurt.

don’t worry I cleaned it up though

Probably wasn’t recognized because the suit he swam in hadn’t been approved by FINA (like Alain Bernard’s 46.94). The time is recognized but the record isn’t homologated

oh it was recognised. cavic went 50.01 in the semis which was recognized as a world record. also this:

49.29 with a better turn and finish. He won’t be happy with that swim. But when you are swimming the best of your life it only takes a tad bit more DPS to throw things off and that’s clearly what happened.

It constantly happend to the GOAT. You can train easy speed all you want but the games are a different beast no matter who you are.

yeah I think phelps said that his only perfect race was his 1:42.96. his freestyle was the best it ever looked and he nailed his pacing, turns and touches etc

It feels to me that after this race, Milak has more upside ahead of him in this event than Dressel

Milak is reaching the age where you don’t really improve your time that much. He’s 21-22 now

with his famously and incredibly forgetful attitude and lax training regime (he was late and had less than 15 minutes to warm up for the 200 fly) all he has is room for improvement,

Wait what?! Where is this story?

Suit ripped among other things.

His coach told the full story of what happened before that 200 fly final in an interview. Long story short, Kristóf was late from warmup because he misunderstood the schedule his coach (Attila Selmeczi) told him. He did a total of 500 meters in the warmup pool before he had to start preparing for the race. While in the last call room Kristof noticed he didn’t have his accreditation card (athletes need this card to identify themselves, idk how you call that in english, it’s my rough translatiom from hungarian) on him so there was a rush lookinh for all his stuff. While in panic mode they noticed the suit rip. Now we are 10 mins before the race, Kristóf… Read more »

Milak is 21 and his main focus has been the 200 fly so imagine if he put more effort into the 100… He seemingly enjoyed this race a lot more as well as nobody was able to come close to him on the 200 for the past 2 years to push him, he’s always competing against his time and himself.

Dressel is 24 and he keeps breaking (his own and the world) record so not sure what age has to do with it. Dressel has room for improvement too, it’ll be good to watch.

Here’s to many more good races to come!

Tell that to Emma McKeon.

tell that to ryan lochte. or inge de bruin

Yeah, and did you see Milaks start already .5 seconds behind.. he has a ton of room to improvement. His muscle mass is also geared for the 200, imagine if he wanted to train for the 100?

He would still lose?

I’ve seen Dressel nail his turns and finish, I’ve never seen milak have a start anywhere close to dressel’s. That’s not something you can just make a few tweaks to match

If Milak wants to match the 49 low/flat Dressel could’ve gone tonight with a better turn and finish, he’ll have to add muscle, which will likely slow his 200.

🤔. I’m not sure you know. Somehow I think slightly different tactics would do it. He ran out of pool when Caeleb, with a magnificent swim was decelerating. 1.75 or 8 m/s to 1.71, I think

Milak swam a hell of a race…wins it with another few meters of room. Insane all around

That absolutely was an amazing comeback split by Milak, and kudos and congratulations to him for that 49.68…BUT…Caeleb easily could have swam a 49.0, maybe even around 48.9. His stroke was long on the turn, which by my estimate cost him about .3 of a second, and partially long on the finish, which I figure cost him about another .2 of a second. Caeleb is no doubt happy to get the Gold, but he must be kicking himself a bit knowing he could have gone faster, and should have.

Absolutely no way he lost .3 on the turn and .2 on the finish lool you are talking as if he missed the wall by 5 meters. That swim had like .15 in it, but cmon it is a 100 fly, nailing the turn and the finish perfectly is a 1/100 occurance.

You are absolutely completely wrong

Nah be missed them both half second easy

Do you know what .3 of a second is? Snap your fingers back to back fast…that’s about .3 of a second. It’s not 5 meters, ok? He also lost some momentum in his turn and push-off because of that, so you could really say he lost close to half a second on that. You throw in the .2 he lost on his finish, and we would be talking 48.75. But let’s give a .25 second cushion that his turn and finish was still ‘slightly off’…that still puts him at 49.00 (48.99 if we want to be cute).

Lol easily 49.0 or 48.9. All you math computation people act like gliding = moving at a speed of 0 vs a speed that is not that much slower than a perfect stroke.