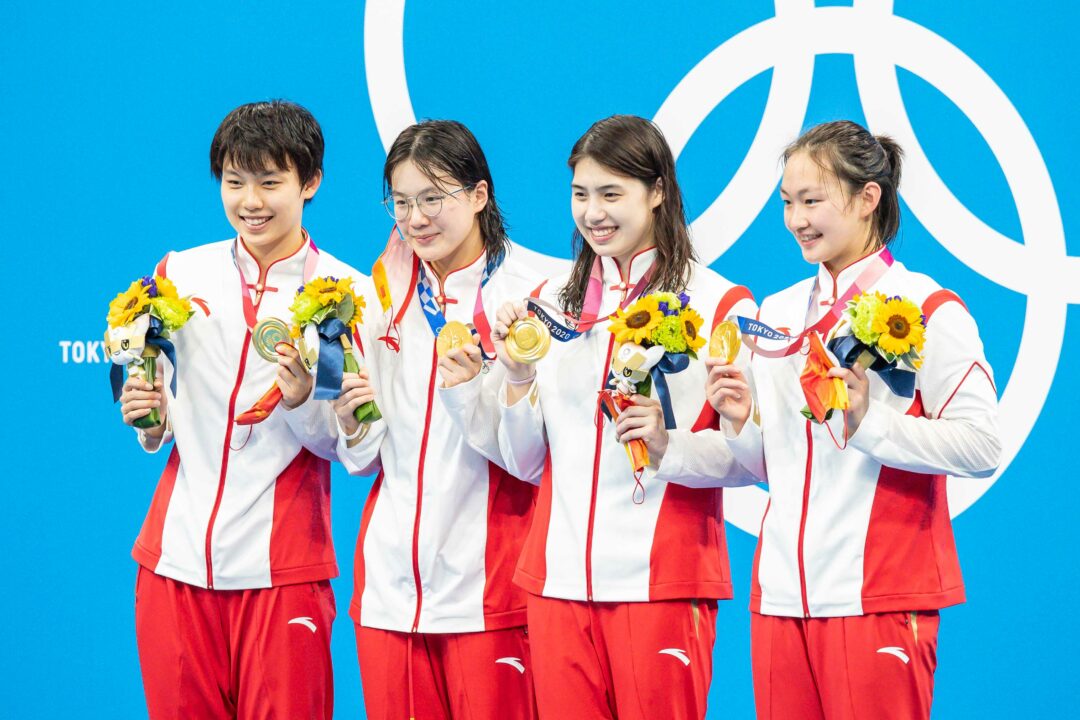 The Chinese women accomplished a massive upset in the women's 4x200 free, snagging an Olympic gold medal as well as a new world record. Current photo via Jack Spitser/Spitser Photography

Australia’s former world record in the event stood at a 7:41.50 which they posted at the 2019 World Championships to take out the 10-year-old mark set by the Chinese in 2009 of 7:42.08. Now that China has taken back the world record and has re-claimed the top spot in the event. Not only did the Chinese team crack the former Australian mark but both the silver medal-winning Americans and bronze medal-winning Australians got under the time as well.

Considering that all 3 of the podium finishers were under the previous world record, a number of national and continental records were broken as well. China’s swim was an Asian record and Chinese record, improving upon their 7:42.08 from 2009. The United States lowered the Americas record, the North American record, and the American record of 7:41.87 from 2019, and the Australian’s broke the Commonwealth, Oceanian, and Australian record of 7:41.29.

The Chinese team got an early lead in the heat as Yang Junxuan opened with a 56.02 for China which was just ahead of Ariarne Titmus‘ 56.18 for Australia. Titmus was actually 3rd place at that point, however, as Canada’s Summer McIntosh notched a 56.10 to start. At that point, the USA sat in 4th with a 56.70 from Allison Schmitt.

China and Australia passed the lead back and forth over the 2nd and 3rd legs from Tang Muhan and Zhang Yufei and Emma McKeon and Madi Wilson, respectively. That was until US anchor Katie Ledecky dove into the pool and started gunning it home. Ledecky managed to chase down Aussie anchor Leah Neale, out-splitting Neale’s 1:55.85 with a blistering 1:53.76. Ledecky nearly managed to chase down China’s Li Bingjie for the gold medal but fell just 0.40 seconds short.

One of the most impressive performances in the 4×200 freestyle field came from Zhang Yufei who split a solid 1:55.66 to contribute to China’s gold medal win. What makes Yufei’s relay leg so impressive is that she did so in the same session that she won gold in Olympic-record fashion in the women’s 200 butterfly. Yufei threw down a 2:03.86 to deliver the fastest time in the event in 12 years since Liu Zige’s 2:01.81 world record in 2009.

The Americans nor the Australians have failed in this event . Its a Team effort and both squads broke the former WR. What really happened is that Team China won !

3 things that screed over Australia

1. putting Throssel in the heats over Neale which robbed O’Callaghan of a finals spot, the line ups weren’t thought out the best.

2. The order they went with, I agree Titmus leads off but they should have had McKeon anchor, Neale was not a smart anchor choice.

3. More of a mental thing from the Aussies, none of them looked like they were attacking the swim, they all just held back and didn’t look like they wanted to push the race.

This is just my opinion. But it was a great effort from the Chinese and USA to get gold and silver very welled deserved and Ledecky’s split was just insane!

It’s a bit rough to say a team that also broke the old world record ‘choked’. If they swam this time in 2019 would everyone be saying they choked or would they be praising an awesome performance? When it became clear we were not going to get there I was rooting for the Yanks; hate to say it, but it’s only because I would not be raising my eyebrows.

One thing I did note that with both Titmus and Emma, possibly Wilson, they powered through the first 175 and then appeared to die in the last 25, giving back all their gains and then some.

I don’t think putting Titmus at anchor would have mattered. She lost in a side-by-side duel against Yang. If Titmus had an extra gear, she would have chased down Yang. But she clearly didn’t have it tonight.

In fact, I think it was for the best that she didn’t swim the anchor as she might have suffered the experience of being chased down by Ledecky.

I love all the amatuer psychiatrists/ psychologists here.All the medalists swam well and broke the WR…

There is no ‘minor medals’. 1st, 2nd, 3rd place out of two hundred something countries. That’s incredible.

Should have been O’Callaghan, Wilson, Emma, Titmus. Disgraceful from the coaches. They blew that, not the girls.