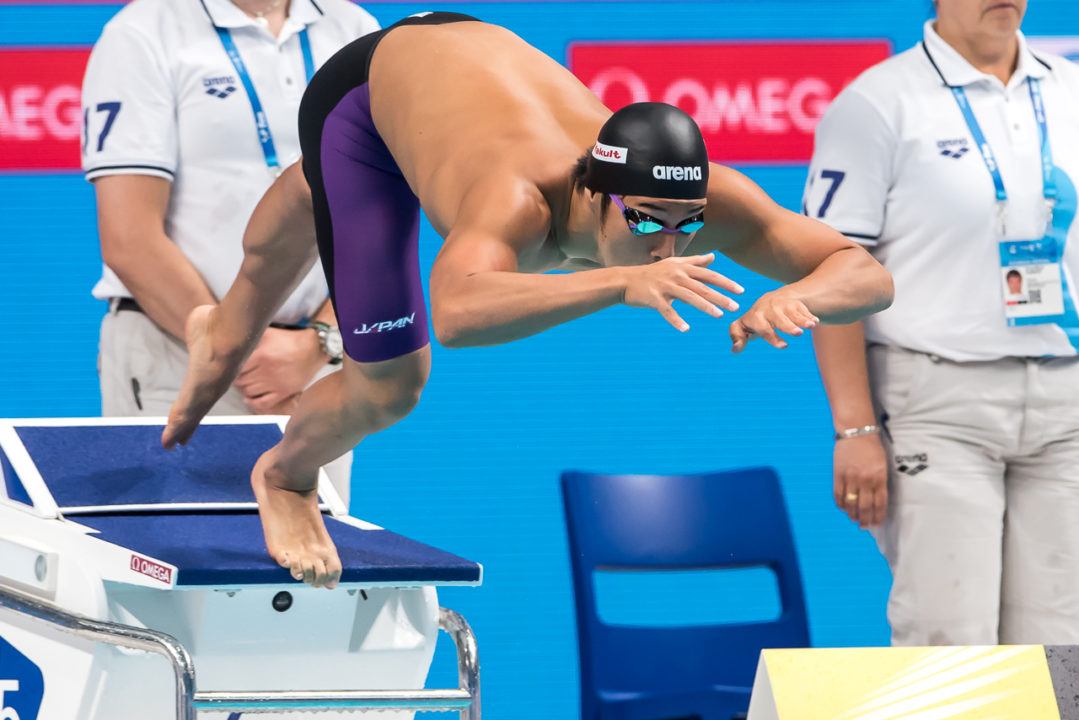 Organizers have indicated they are unlikely to explain until early next year exactly how the Olympics can be held safely given the prompted scenarios.

24-year-old Daiya Seto took his 2nd gold of these championships, which also serve as the first of two qualifying meets for the World Championships this summer in Gwangju, Korea. Swimmers will also have another opportunity next month at the Japan Open Swim.

After hitting the men’s 200m fly mark last night to qualify for Gwangju, Seto manhandled the 200m IM field this evening to rack up his 2nd victory. Entering this meet, Seto’s season-best rested at the 1:56.98 produced in January, a mark that stood as the 3rd fastest in the world.

Of note, two major players were missing in the field, as Olympic silver medalist Kosuke Hagino is tending to his mental health needs to keep on his journey to Tokyo, while Hirmasa Fujimori is suspended pending a doping case investigation. Fujimori finished 4th in this event at the 2016 Olympic Games.

Going back to Seto, his time tonight would have placed 4th at the 2017 edition of the World Championships, beating out his own time in Budapest of 1:56.97 that rendered the new Dad in 5th place.

In her stead, 24-year-old Olympic relay swimmer Tomomi Aoki soared to the top of the podium, taking the 100m free gold in a new personal best of 54.45. Her time tonight slices .24 off of her former lifetime best of 54.69 clocked at the Pan Pacific Championships where she finished 5th.

Rika Omoto was right behind Aoki, touching in 54.51 tonight, registering a new personal best as well. Rio Shirai collected bronze in 54.56, while Chihiro Igarashi settled for 4th in 54.70.

Unfortunately for the women, not only did none of them clear the stiff 53.65 QT needed to individually qualify for Worlds, but the top 4 also missed the relay mark to go to Gwangju. Per the JPN selection criteria, the top 4 100m freestyle finishers needed to collectively hit a mark of 3:37.68, while the top 4 tonight added up equal a relay time of 3:38.22.

Although he holds the National Record in 47.87, Katsumi Nakamura was well off that result tonight in the men’s 100m freestyle final. Opening in 23.37, Nakamura ultimately hit the wall in 48.55, a relatively disappointing result, seeing how the 25-year-old has already been as fast as 48.12 this year.

Former national record holder Shinri Shioura touched just .03 behind to settle for silver in 48.58, his fastest of the season Katsuhiro Matsumoto, the 200m freestyle winner here in a Gwangju-qualfying mark, hit the wall in 48.71 for bronze. That’s Matsumoto’s 2nd time ever under the 49-second threshold, giving him a lifetime best on the night.

As with the women, however, no 100m freestyler for the men qualified individually for the World Championships with their performances. A 48.11 was needed to earn a roster spot, so the slot is vacant until someone potentially hits it at next month’s Japan Open.

The good news is that the top 4 finishers all clocked a collective time of 3:15.06, a result which dips under the JPN QT of 3:15.70, so the nation should be able to be represented in Gwangju in the relay. In Budapest, the Japanese men hit a time of 3:15.65 for a new National Record, so the nation is on the right track to surpass that in Gwangju.

Also good news is the fact that we saw 15 Japanese men go under 50 seconds in last night’s semi-finals in this event, while today’s final saw 3 sub-49 second results. That’s promising for the nation’s sprint program, which is still evolving with every meet.

Hasegawa was just 2:08.80 when she took bronze at the Asian Games last year, so tonight’s time is a nice improvement for the 19-year-old national record holder.

Im disappointed to see that the Japanese Federation is following the same ridiculous cutoff time procedures that the British and French proved multiple times is just plain insulting to the athletes and detrimental to performance.

I really disliked the way the British system worked when it came in a few years ago because it forced people like Liam Tancock out and didn’t give much love to pure 50 sprinters outside of freestyle. However it all comes down to the funding system. British athletes are funded largely through lottery funding and the expenditure has to be justified. If ‘the nation’ isn’t reaping rewards at the Olympics in terms of medals then it was deemed ‘the nation’ wasn’t getting a return on its investment. It’s quite cutthroat, and as i said i disliked it (and still find it quite harsh) but at the end of the day the steep times are there to make sure that athletes… Read more »

At the time of the relay mark I mentioned it was a National Record.

“Hasegawa was just 2:08.80 when she took bronze at the Asian Games last year, so tonight’s time is a nice improvement for the 19-year-old national record holder.”

More like she was in a bit of a slump last year. At the 2017 nationals she qualified for Budapest with 2:06.29 (WJR as well). She changed coaches last September and is now coached by her father, which seems to be working.

On the men’s freestyle, since Nakamura and Shioura made it on the relay, they will very probably be allowed to compete in the individual 50/100 free, as they were in Budapest, specially with the current drought of qualifiers.