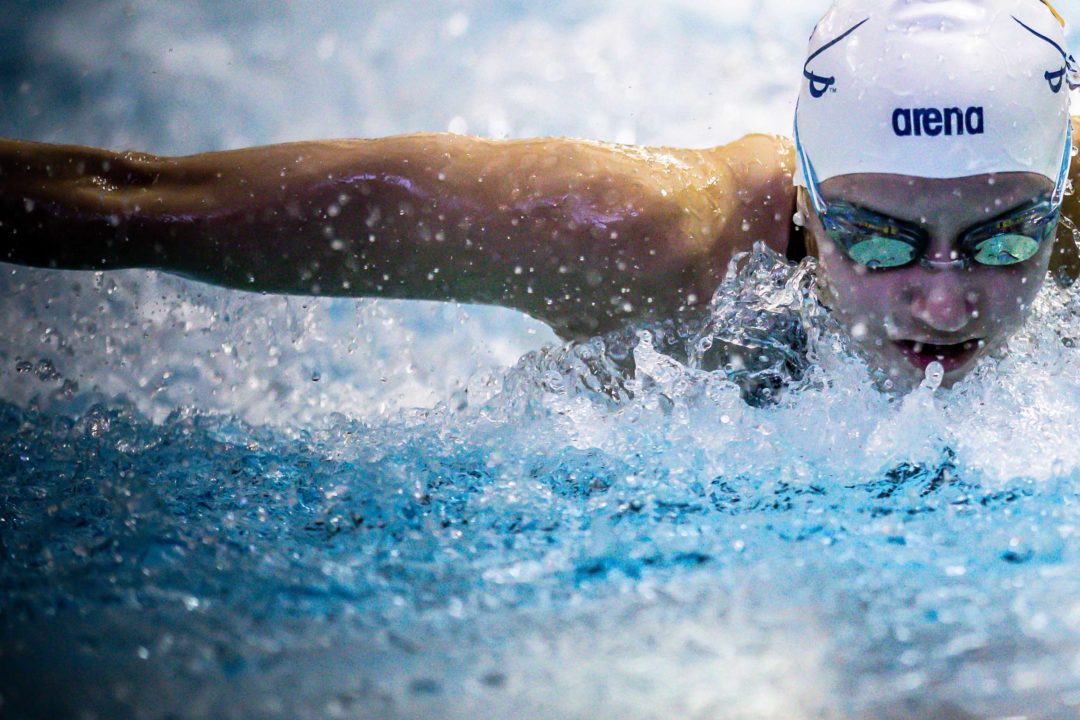 Virginia is in the midst of a recruiting tear - but how do their returning points stack up after graduating a few key contributors? Archive photo via Jack Spitser/Spitser Photography

Virginia returned to the top of the ACC in 2020, cruising to a 159-point win based on massive points from their juniors (46.05) and freshmen (342), the two highest-scoring classes in the conference. Both classes were represented by a multi-event conference champ: Paige Madden (200/500/1650 free titles for the juniors) and Kate Douglass (200 IM/100 fly titles for the freshmen). UVA swept four of the five relays and also saw senior Morgan Hill take the 100 free.

Louisville had the lone swimming event win outside of those two programs (Grace Oglesby in the 200 fly) and finished third overall.

With those three teams the clear-cut top tier, UNC rose to fourth place in the first year of its new coaching staff under Mark Gangloff. Notre Dame bested Duke for fifth.

Virginia is built to defend its title, with the entire freshman and junior classes returning. Four Hill relay legs are clearly the biggest losses, but the Cavaliers are plenty deep enough to refill those spots from their growing pool of blue-chip recruits. UVA returns 80% of its individual points, the highest percentage of the top three teams.

NC State graduates more points than Virginia, but does return one more relay leg. Star sprinter Ky-Lee Perry is the key loss, and her splits were high-impact, much like Hill’s were. On the flip side, the Wolfpack are well ahead of Louisville in returning points, and it looks like a very stratified conference with only two real contenders for the 2021 ACC crown.

Louisville drops off badly in returning points, losing seven individual scorers and almost half of its relay legs. In fact, UNC could be primed to make a run, with just 13.5 fewer returning points than Louisville and all but one relay leg returning.

Further down, Florida State sees a big disparity in returning individual points (just 58% returning) and relay legs (a conference-high 19 of 20 returning). That’s because their top two scorers last year were senior divers who are now out the door.

Louisville and NC State also have great recruiting classes. Louisville went in big on butterflyers, which is timely after top individual scorer Grace Oglesby used up her eligibility this season. Tristen Ulett (52.0/1:55.7) and Gabi Albiero (51.9/1:55.8) should be an awesome pair, and backstroker Paige Hetrick (52.8/1:53.0) helps fill in some points from a big senior class.

A few other recruiting classes stand out. Virginia Tech has a relatively small but high-impact class. Distance swimmer Chase Travis (4:41.7/16:05) is one of the best freshman milers in the country. 52.8/1:53.7 backstroker Emma Atkinson is a great pickup, and Spain’s Nadia Gonzalez (2:02.2/57.0/26.1 long course free) is a good addition to the relay pool.

Duke has a big class, led by senior transfer Mia Bullock, the Atlantic-10 Swimmer of the Year and a 53.0 flyer for Fordham. Turkish record-holder Aleyna Ozkan (59.8 long course fly) adds to that fly group, along with 1:56.7 flyer and 4:12.4 IMer Catherine Purnell.

It’s pretty hard to pick against Virginia at this point, with a nearly-200-point edge in returning points, plus the best recruiting class in the conference by a longshot. That’s more a vote in favor of Virginia’s excellence, though, than it is any slight to NC State, which also returns a strong amount of points and adds a good group of newcomers.

It’d be shocking to see anyone challenge those two for the top two spots. Louisville vs UNC could be an intriguing one. The Cardinals have just 13.5 more returning points, and North Carolina brings back all but a single relay leg from last year. But Louisville’s great freshman group could be a difference-maker. And UNC’s freshmen only scored 90 at ACCs last year compared to 148.5 for Louisville, so the underclassmen heavily favor the Cards.

From there, things could get interesting. Notre Dame returns about 125 more points than Duke, and their recruiting classes are very comparable. But Virginia Tech is charging behind them, with a few high-end recruits and 17 of 20 relay legs returning. But will that be enough to make up about 60 points on Duke and almost 200 on Notre Dame?

Florida State has all but one relay leg coming back, and they should upgrade some legs with Kurdi coming in the door.

Also for Uva, they’ll have her and Douglass who’s pretty much equally insanely versatile in the same springy events on the same team for 3 years.

Plus Gretchen Walsh will swim with both for 2 years – she’s slightly less versatile, but has an even higher ceiling in the 50/100 free, which will make her huge on 4 relays

If I’m not mistaken… In the recap of 2020 acc’s… The 200 back win from Emma Muzzy isn’t listed. Another NCState sophomore.

I remember it being a fun 1-2 punch from Muzzy & Berkoff. Contributing to a backstroke sweep by NCState… Just not by the same individual.

Love this kind of in depth analysis! Thank you!