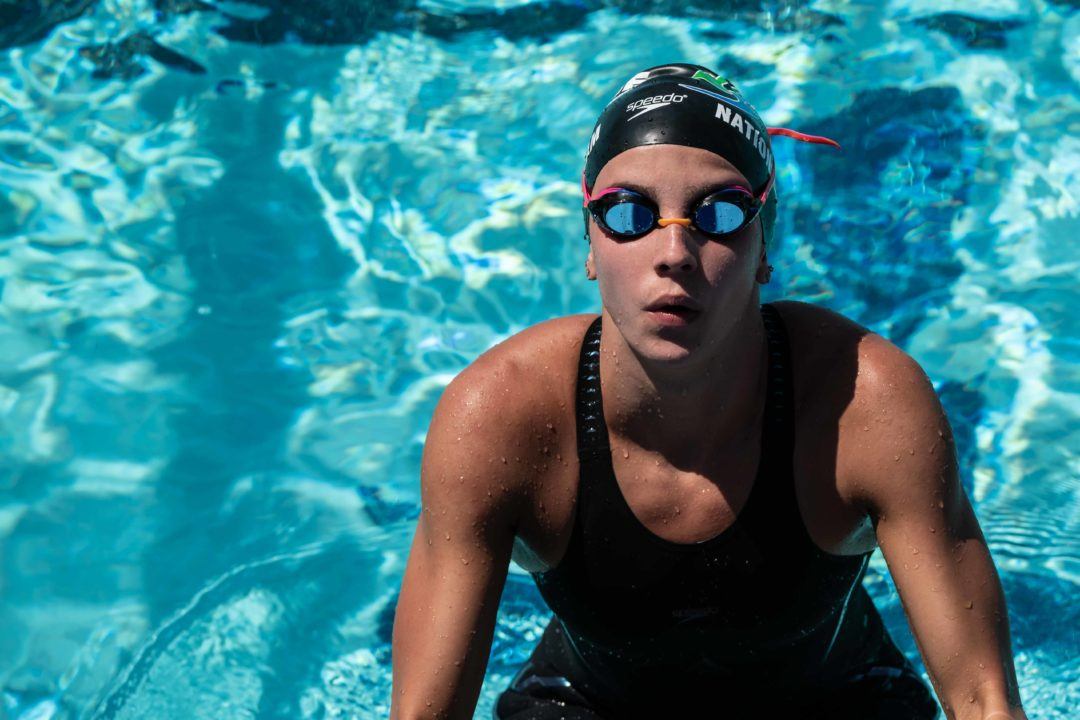 Cal has a great outgoing backstroke group (Keaton Blovad, Courtney Mykkanen) and luckily for them, the national recruiting class is one of the strongest backstroke fields in years. Cal got the third-best backstroke recruit, and she’s still a legitimate All-American contender in both distances as a freshman. Isabelle Stadden is 51.2/1:50.3 out of high school. The Minnesota Aquajet follows in the footsteps of another former Aquajet-to-Cal backstroker, one Rachel Bootsma.

Denmark’s Emily Gantriis helps cover for Cal’s other big graduation: star sprinter Abbey Weitzeil. Gantriis is 25.4 and 55.6 in long course freestyle, even swimming up to 2:01 in the 200 free. That should make her an instant relay swimmer across all three relay distances.

Nicole Oliva was a really intriguing prospect – she’s a national teamer for the Philippines, but attended high school in the U.S. Oliva has outstanding freestyle range (16:28/4:42/1:46.3 are her best times, but she’s also 23.6/49.9 in the sprints) and should be an effective college swimmer.

If those two domestic recruits aren’t enough, Texas supplemented with German breaststroker Anna Elendt, who is a 1:08.0 in long course meters. Elendt swims very well down to the 50 breast (30.5 long course) and also up to 2:29.7 in the 200, and should be a multi-event scorer early in her career.

Divers tend to be harder to project, but in-state pickup Bridget O’Neil looks like one of the top freshmen divers in the country. She was a bronze medalist at 2018 Youth Olympic Games on 3-meter and joins a Texas diving group that has been sensational for a long time.

It’s a really, really tough decision between the top two recruiting classes here. Virginia got an amazing all-around recruit in Alex Walsh, who probably projects best as a breaststroker/IMer (58.19/2:05.8 breaststroke; 1:53.6/4:07.9 IM), but could also swim backstroke (50.8/1:51.4) or freestyle (22.0/48.9/1:45.0). Walsh is going to be a massive addition to Virginia’s fast-rising relays, and with the success Kate Douglass had there as a freshman, you have to be excited about Walsh’s potential in the 200 IM.

Anna Keating is a big in-state pickup, a 59.0/2:09.2 breaststroker who can chip in behind Walsh or even take over the breaststrokes if Walsh focuses elsewhere.

Emma Weyant is an elite long course IMer who doesn’t have the same kind of short course production yet, but has an incredible ceiling. We’d expect to see her focus in on the 400 IM (4:07.6) and 500 free (4:40.8) in Virginia. She’d be joined in a burgeoning IM group by British import Sophia Wilson, who is 2:17 and 4:53 in long course meters.

Virginia just graduated key relay contributors Morgan Hill and Megan Moroney. Ranked recruit Abby Harter should help pitch in to fill the butterfly gap left by Hill – she’s 52.3 in the 100 and 1:54.7 in the 200. And then Virginia got a late add from Quinn Schaedler, who changed her commitment from Michigan to UVA, bringing 1:45.9/48.8/22.8 freestyle speed.

Stanford’s class has one less member than Virginia’s, but also two of our top six recruits nationwide. #1 Regan Smith is one of the all-time greats – we ranked her as the best NCAA swimming prospect of the past decade, and didn’t get a whole lot of pushback from anyone. That speaks to Smith’s absurd resume. She’s the American record-holder in the 200 back (1:47.1) and the presumptive NCAA favorite in the 100 back (49.6). She’s the world record-holder in the long course 100 and 200 backs. She’s the fastest 200 flyer (1:51.2 in yards) of anyone in this recruiting class, and also leads the national recruiting class ranks in the 500 free (4:37.1), 200 free (1:43.27), and 100 free (48.07). There’s just no overstating how big an impact Smith will likely have in her freshman season – and she recently confirmed she will attend Stanford, rather than deferring her enrollment until after the Tokyo Olympics.

Lillie Nordmann is awfully good in her own right. A 1:43.6 freestyler, Nordmann could pair with Smith as the bookends of a lethal 800 free relay for years. Nordmann is also 52.0/1:53.2 in butterfly and should score early in her career.

And that’s not even accounting for relay exchanges, or the three other highly-ranked recruiting classes Stanford already has on its roster. The other incoming freshman is Isabel Gormley, an honorable mention just outside our top 20 nationally who intrigues with a 4:08.8 IM and a 4:45.3 freestyle.

She is soooooo good, its so cool to see.

Regan Smith is better at the 100 fly than the 500 free as evident by her performance in Des Moines at the 2020 TYR Pro Swim Series.

Wow, I kept hoping to see Arizona in each article as the classes got better and better. What happened?

Arizona has one very solid international, Amalie Mortensen, who is 55.9 and 2:01.6 in long course free. They’ve got two 53-second butterflyers, too, but it’s more of a developmental class at this point, unless there’s another name we haven’t seen yet.

Braden what in God’s name are you doing putting the Hoos at NUMBER 2??? You’re gonna eat your words come March!

I didn’t write this, dan.

Eat his words? They aren’t predicting the finish at the 2021 NCAA Championships!

Not to NCSU though.

I’m the one you should be mad at. Though Alum15 is correct that this is not a prediction of who scores more points this March. It’s about which schools have the best incoming classes right now, based on past swims. What each college coaching staff does with these recruiting classes will have a lot of say in which ones score the most points over their NCAA careers.

First it was gripes about Tennessee, then Auburn, now Virginia. Sounds like sour grapes to me.

It’s all part of the fun 🙂 college swimming fans are very supportive of their teams, and as much as I trust my own research and rankings, it’s fun to hear what our readers think. The discussion is exactly what we hope for when we post our rankings!

One can be supportive of a college swimming program but the over the top proclamations of the irrational college swimming fan has become absurd. Let the long course performance do the talking:

If you can’t run with the big dogs, stay on the porch.

Low key, promising the fans of a certain Eagle’d program answers to why they weren’t included in other articles on this article and then this comment being the first mention of that program made me laugh so hard.

Now that ranks are completely published – felt there was a dropoff from the nine schools we listed as honorable mentions to the next 3-4 that didn’t make the list. Most of those just outside (Kentucky, Minnesota, Auburn) were big, well-rounded classes, but without any really immediate-impact types in the mix.

Deep down inside, you know Regan Smith will slaughter Alex Walsh in the backstroke events. Just admit it! Alex Walsh better stick to the IM to avoid the humiliation.

For people who didn’t get it, I believe this is a parody on “Desorbo Effect.”

The question is did he see his shadow?

as great of a swimmer as she is, 2BK/2FL double is bananas.

That’s a great question. I see her following the footsteps of a lot of elite, versatile recruits (Missy Franklin, Kathleen Baker, Beata Nelson, Kate Douglass) and swimming the 200 IM. Seems to fit really nicely as a third event with almost any other event combo. 200 fly/200 back double would probably hit Smith’s overall best events, but doing that combo twice, along with a likely 400 free relay leg on day 4 of NCAAs just seems brutal, and probably wouldn’t allow her to be at her best in any of the three events. 500 free is an intriguing dark horse, but Stanford is already so strong there (Forde, Pitzer, Tankersley) that it probably makes more sense to spread out their… Read more »

Yeah, that’s true, but 1:56 is actually quite good for a high school IMer – we tend to see a lot of time drops in the IMs, specifically, in college. For example, Missy was 1:55.3 out of high school, and wound up going 1:52.1 as a college sophomore. Beata Nelson was 1:57.5 out of high school and 1:50.7 by her junior year. Kate Douglass was 1:56.0 in high school and went 1:51.3 as a college freshman, despite not even getting an NCAA swim. For whatever reason, it seems like top juniors don’t focus on the 200 IM too often, which would definitely be the case for Regan, whose career-best is a two-year-old in-season swim from a Sectional meet.

Agree that the 2 back/2 fly double with a relay on one day is probably too much too ask, but I just wonder whether it wold be easier for her in the 500.

How much enphasis will be placed on training the breaststroke in a Summer Olympics year?

Right – I think 1 fly would make more sense than IM (understanding it’s a few events before 1 back on same day).

To the fans of the Virginia Cavaliers, where is Walsh?

I do agree 100 fly/100 back is probably the most logical choice – wouldn’t be surprised to see that be the solution. IM is a dark horse option, I think, just based on some other swimmers of Smith’s caliber who have broken out in collegiate IMs.

Check back tomorrow morning – we’ll start our ranks then!

I’m really cheering for the Texas women. This is an awesome class and maybe their year for a top 5-6 finish and some momentum for a much needed top-3 trophy in the future. Also, didn’t Cal get a decent sprint/breaststroke recruit from Washington?

I think they originally got a verbal from Gracie Felner, a versatile sprinter from WA, but she changed her commitment to Alabama.