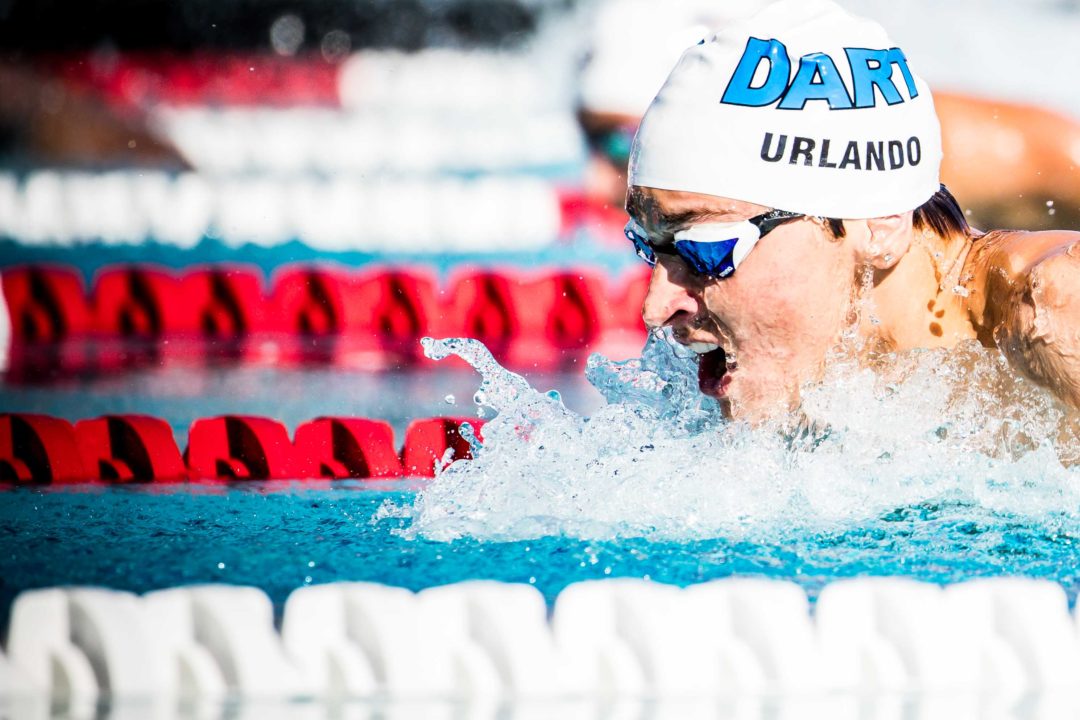 When you recruit a butterflyer and a miler, and still add immediate upgrades to your 200 free relay. How did Georgia do it? Range, range, and more range. Archive photo via Jack Spitser/Spitser Photography

There’s a lot of sprint prowess incoming for Alabama, which is great for noted sprint coach Coley Stickels. Washington’s Matt King is one of the top freshman sprinters nationally, coming in  at 19.7/43.2 out of high school. He should become an instant relay contributor with a high ceiling for individual points down the road.

The other big relay additions are international. Bernardo Bondra out of Brazil could be a massive weapon. he’s 52.3 in long course butterfly, and has split 49.6 on a long course 4×100 free relay. Roughly converted, that puts him in the 45.9-range for the 100-yard fly and somewhere around 43-low for his 100 free split.

Meanwhile Poland’s Kacper Piotrowski (23.0/50.6/1:51.5) could be a multi-relay threat, depending on how well he can convert his speed into the yards format.

Ohio State always seems to have solid depth, and this class is exactly how they do it – a big class with a mix of established and developmental talent.

The most established is Hunter Armstrong, a key sophomore transfer from West Virginia. Armstrong was a late-comer to full-time swimming, but blew up over his senior year, going from 21.2 in the 50 free to 20.1/44.2 in the 50/100 frees. Then he dropped to 19.7/42.7/1:35.8 as a freshman at WVU. Armstrong will join Ohio State this fall and should be an early-impact, much-needed relay piece. The Buckeyes graduated Noah Lense and Andrew Loy, and their last transfer, star freestyler Cameron Craig, dropped off the roster after two DUIs.

Owen Conley is probably the biggest name among the freshmen. The 3:46.0/1:47.5 IMer was an honorable mention just outside of our top 20 nationally. He’s also 1:44 in backstroke and 1:37.0 in freestyle for some potential relay ability down the road.

And the relay building doesn’t stop there. Justin Fleagle is the younger brother of former Buckeye All-American Josh Fleagle, and brings multistroke sprinting speed to the table. Fleagle is 19.9 in the 50 free, 47.7 in the 100 back and 48.1 in the 100 fly. In the fly, he joins Jean-pierre Khouzam, a 47.0/1:44.4 prospect, as in-state pickups.

Urlando is also a 1:42.9 IMer, and brings 19.8/43.2/1:34.3 speed in freestyle. For a Georgia program that has struggled for a long time to build out its freestyle relays, that’s an incredible addition.

Between Urlando and #3 prospect Jake Magahey, the Bulldog relays could take a huge step forward without the team even recruiting a true sprinter. Magahey has extremely rare freestyle range. He’s probably best as a distance swimmer (4:12.7/14:51 in the 500 and 1650), but comes down to excellent 19.9/43.1/1:33.3 times in the relay distances.

Urlando and Magahey should plug right in on all three freestyle relays. Last year at SECs, the Bulldogs had two splits above 20 seconds on the 200 free relay and one split above 44 on the 400 free relay.

Georgia also got French distance swimmer Tommy-Lee Chamblong, who is 15:18 in the long course 1500 and should convert close to 15:00 in short course yards. In-state prospect Connor Haigh is a 55.1 breaststroker who could develop into a medley relay piece, and UGA also got Hong Kong’s Cheuk Yin Wesley Ng, a 50.9 long course freestyler.

There’s a clear-cut difference in tier when you hit these top five classes. Michigan has two top-10 recruits and one great international, in a class that should pay dividends for years.

Wyatt Davis is an outstanding backstroke prospect and the reigning World Junior champion in the 200-meter back. His 1:40.8 in the 200-yard back is one of the better times we’ve ever seen from a high schooler in that event. Davis is also 45.8 in the 100 back and has a shot to score at NCAAs in both events as a rookie, without even needing to drop much time at all. Between that 100 back and a 1:33.6 in the 200 free, Davis should be a multi-relay weapon every year, and he’s got a 1:44.1 in the 200 IM that probably projects as a better third individual event than the 200 free.

Michigan beefs up its fly group with a pair of prospects: Illinois’ Bence Szabados (47.3/1:44.8) and California’s Charles Morici (47.0/1:46.3). Szabados is also 19.9 in the 50 free, which should be rare out of high school, but gets lost in this extraordinary class nationally.

There’s some other sneaky talent. Yugo Tsukikawa out of Ecuador is 15:25 in the mile. Ansel Froass chips in a 1:47.5 IM for development, along with a 55.1 breaststroke. Michigan just graduated a bunch of IMers, so Froass may have to contribute early.

One could argue that the difference between the top 5 classes and the others isn’t that large when there are 2 classes ranked at 5.

Will Florida’s streak of SEC titles be broken in a few years? Once their rising junior class graduates out, it looks as if it will be wide open between a handful of teams! Georgia and Alabama look to be building up nicely

Prediction, Jake Magahey will be the best 200 freestyler in this class. Has the distance base and has a great 100 lcm which historically adds up to a great 200scy.

I’d put money on Lukas Miller. His progression in 200 free is insane.

Puberty is a hell of a drug.

This is a great discussion, because there are a bunch of really good options in this class (SC & LC times listed):

NCSU swimfan, a few people ahead of Lukas Miller in the 100 free LCM in the class of 2020 are Andrei Minakov, Jake Magahey, Adam Chaney, Carson Foster, Destin Lasco, Luca Urlando, Luke Maurer, Matt Brownstead, and probably a few others I missed.

Looking at the SWIMS database, only Brownstead and Minkov are faster for the 2020 Season, He is ahead of Magahey, Chaney, Lasco, and a few others I missed according to the Swims Database.

His range is great and his times are fast but his technique needs some work!

Don’t fix it if it ain’t broke.