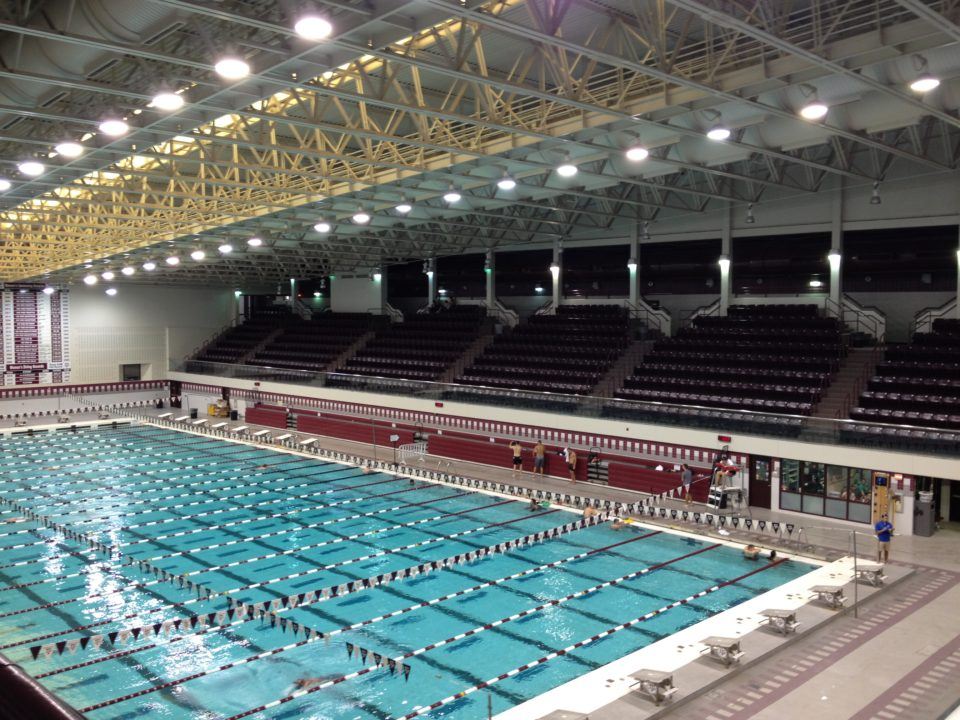 Lanes in 2 of Texas A&M's pools can be reserved for 50 minutes at a time beginning May 21. The main natatorium that hosted the 2009 NCAA Championships (above) will not open. Archive photo via Texas A&M University

The PVH Arena in Eindhoven might be a little quieter beginning with Playoff Match #2 on Saturday night, with new restrictions on sporting event spectators expected.

Texas A&M University will become one of the first major colleges in the country to re-open its pools on Thursday.

As club teams are slowly returning to the water around the country, including at least two big club teams in Texas, most university pools have remained closed. With summer classes around the country moved to remote study, or cancelled altogether, campuses are generally empty of their primary stakeholders, students, and so many of the support services remain closed as well.

This has left many club swim teams, which depend on facilities at universities, in a lurch to reopen, even where the local governments say they can.

But Texas A&M has begun to slowly reopen its facilities, including 2 of its on campus pools.

Beginning May 21, the school’s Cain Outdoor Pool and Indoor Lap Pool will both reopen. In Texas A&M Rec Sports nomenclature, “Indoor Lap Pool” refers to the smaller 8-lane, 25-yard training pool that is next to their massive 50-meter + 25-meter dive well “natatorium” that hosted the 2009 NCAA Swimming & Diving Championships, among other large-scale meets.

The Cain Outdoor Pool, not to be confused with the old 50 meter outdoor pool that used to be the school’s primary swimming facility, is a 6-lane, 25-yard pool.

So, in summation, 14 lanes of 25-yard pool space will now be available on campus.

Rec Center members must reserve lane space ahead of time, and all workouts will be limited to 50 minutes, with a 10 minute gap between time slots.

Students, including student-athletes, have been able to access the strength & conditioning facilities at the school (also by reservation) beginning on Monday, May 18.

SEC schools, like most NCAA programs, are not allowing any organized physical workouts (in person or remote), and only limited, remote team meetings, so any thought of NCAA practice resuming is still a distant dream, for now.

The Texas A&M men finished 2nd at February’s SEC Championship meet while the women placed 6th, breaking a run of 4-straight SEC titles. A number of Texas A&M varsity swimmers remain in College Station in spite of classes having been made remote.

Brazos County, where Texas A&M is located, has 362 confirmed coronavirus infections and 18 deaths caused by COVID-19 among a population of around 230,000. The county is among those where the spread has increased (based on testing) since Governor Greg Abbott began reopening the Texas economy on May 8th.

The school says that the coronavirus pandemic hasn’t impacted its summer, remote enrollment, and all 11 schools in the Texas A&M University system voted to reopen campuses in the fall. The school says that it is exploring late-night and Saturday classes in order to reduce class sizes and comply with physical distancing regulations.

So when do we think the NCAA will start allowing teams to practice?