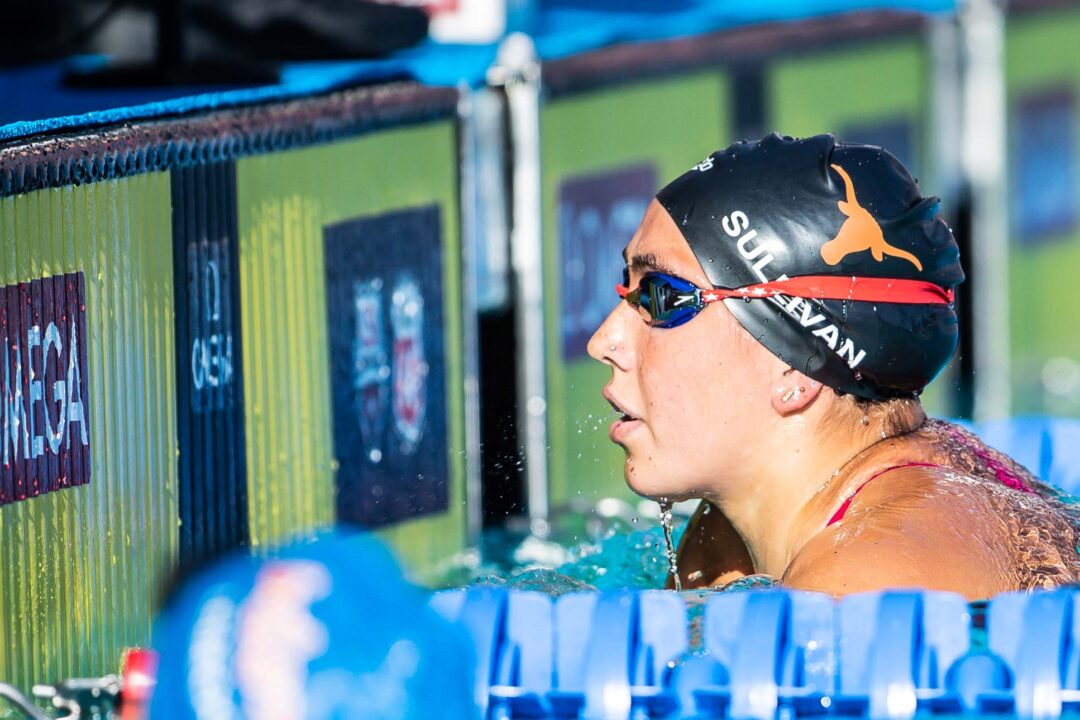 Sullivan was one of three prominent names on the Texas women's roster to miss the "Dust Off Your Boots Invitational" with TCU on Friday. Archive photo via Jack Spitser/Spitser Photography

The Texas women were missing three prominent names in their season-opening meet against TCU on Friday, a 187-91 victory in the annual “Dust Off Your Boots Invitational.”

One of the three, sophomore standout Erica Sullivan, missed the competition after testing positive for COVID-19, according to a post on her Instagram Story. She later added that she had a sinus infection post-COVID. The illness is not expected to impact her long-term availability.

Sullivan, 22, was the NCAA runner-up in the 1650 freestyle in her freshman year, and was also the third-place finisher in the 500 free to score 33 individual points.

At the Tokyo 2020 Olympic Games, Sullivan was the silver medalist in the women’s 1500 free, placing second to U.S. teammate Katie Ledecky. This past summer, Sullivan did not compete at the U.S. Trials for the 2022 World Championships, citing a shoulder injury.

The two other notable swimmers missing from the Longhorns at Friday’s invite were Olivia Bray, the team’s second-highest individual scorer at last season’s NCAA Championships, and freshman Lydia Jacoby, the reigning Olympic champion in the women’s 100 breaststroke.

Texas declined to comment on why either swimmer missed the competition.

On Friday, the Longhorns were led by junior breaststroker Anna Elendt, who won two individual events at the meet, while sophomore Olivia McMurray, juniors Bridget O’Neil and Grace Cooper, and senior Kyla Leibel all had one win and one runner-up finish apiece.

The team, which is coming off a runner-up finish at the NCAA Championships in March, will resume its fall schedule on Friday, Oct. 21 when they host Texas A&M and Indiana in a tri-meet.

She is a champion and will be back in plenty of time for the big meet!

Did their absence effect the outcome of the meet? Just asking??

My absolute favorite part of this whole story is Braden’s tweet to the Texas AD requesting further information and the AD replying, “Hi Branden…” and then proceeding to dodge his question again. Big LOLs

Jacoby was hanging out at a joint called Jacoby Bros. Burgers a few days ago. Doesn’t look like she’s fully focused on swimming at the moment.

because you can’t be focused on swimming if you like burgers…?

don’t ever come between a swimmer and their meal. Might be a problem if she was ditching practice to be there otherwise she is eating a meal just like every other swimmer does like 5 or 6 times a day.

because she was *checks notes* eating food?

6
0
Reply
Did not Cali UT
Reply to  Chanandler Bong

She had that cough! So she took the day off!

She had the sneezes! So she needed to take it eases!

Okay you get it…