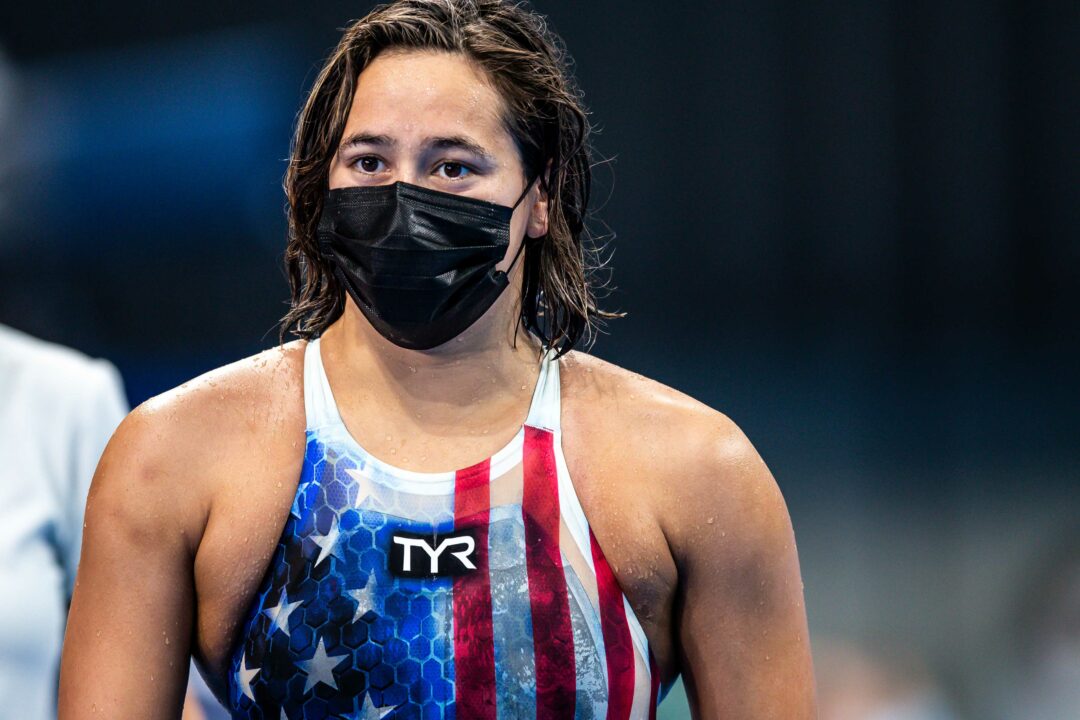 Tokyo Olympic silver medalist Erica Sullivan will not be racing at the U.S. International Team Trials due to shoulder injury. Current photo via Jack Spitser/Spitser Photography

University of Texas freshman and Tokyo Olympic silver medalist Erica Sullivan, who will not be swimming at this year’s U.S International Team Trials, has suffered a shoulder injury.

She confirmed the injury in a TikTok live video on Thursday and said that it was the reason why she wouldn’t be competing at trials. She has declined to elaborate on the nature of the injury or her timeline for a return.

Sullivan last swam at the U.S. Open Water National Championship on April 1 in the women’s 10k race. She was leading for the first three laps of the race, but then faded in the second half and ultimately did not finish the race. She won the 10k national title last year, but this year, it went to her former Sandpipers of Nevada teammate Katie Grimes, who trailed in second behind Sullivan for the first part of the race.

In the pool, Sullivan is coming off an NCAA championship meet where she finished third in the 500 free and second in the 1650 free.

Last year at Olympic trials, Sullivan finished behind Katie Ledecky to make the Olympic team in the 1500 free. She repeated that finish in Tokyo to take the silver medal in the event, and ended up outsplitting Ledecky, who won gold, in the back half of the race.

Aitken handed Dalton and Capitani a silver medalist, and this happens due to a blatant lack of regard for technique

Regardless of how/when it happened, I really hope Erica fully recovers to continue competing at the appropriate time. My daughter and I love watching these Sandpiper distance girls race.

It was rough conditions at OW nationals apparently. Preumably she injured or aggrevated it then. Hope she gets better soon not a good injury to have as a swimmer.

You sure she didn’t injure it at texas. Don’t get me wrong she had a fantastic season for a freshman and in general, but if she was at her best she should’ve won the mile easily. Maybe I’m reading too much into into it but like she didn’t exactly have a standout season for her standards, so maybe that could’ve been a factor

You didn’t see the conditions at open water nationals. I was on that beach for the women’s 10k race, it was absolutely brutal. I could definitely see an injury happening out there given the nature of open water and the conditions. I hope she’s thriving at Texas.

Interesting. How can they have month long training trips with school?
And when Australian coaches train their swimmers hard, everyone rips into them.

Apparently they have pretty extreme dietary rules for swimmers too. An Australian club would be called abusive for this.

Yeah….. Sandpipers is in ‘Murica so it’s all good apparently.

Hey, how are the reforms coming along on the 46 things found wrong with AUS swimming by your female Independent Commission?

Loads of home schoolers at Sandpipers, so they can do these training trips for weeks on end. Freaky, absolutely fringe “nutrition” stuff too. It’s….. different? Certainly not a mainstream program and certainly some would absolutely call it abusive, but hey, it gets results so it can’t be that bad, right? Right???

In an interview Ron spoke about how he encouraged the swimmers to be either homeschooled or in an online education setting because they both allow flexibility for training.

Is this just the group that might make the US National Team or in general?

Online school, month long trips. These kids must be sponsored by Visa and Mastercard.