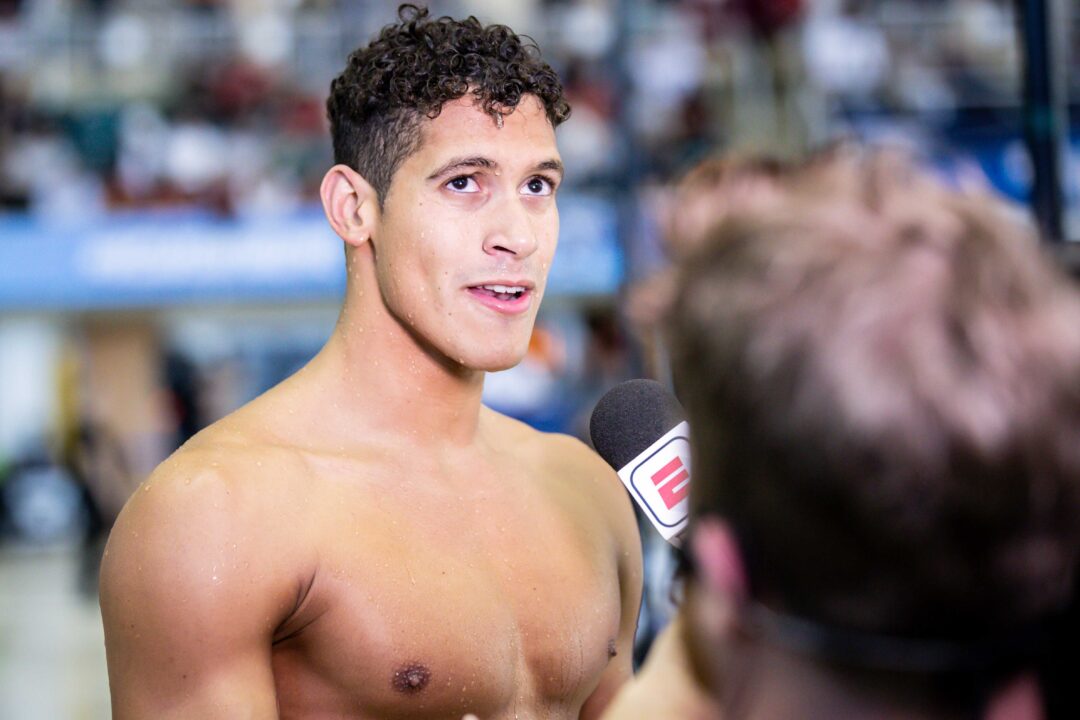 Hugo Gonzalez is among a 9-swimmer Spanish team for the World Championships in June; Spain has also named a preliminary European Championships roster. Archive photo via Jack Spitser/Spitser Photography

The Royal Spanish Swimming Federation (RFEN) has announced a 9-swimmer team for the 2022 World Aquatics Championships.

The meet will be held in Budapest, Hungary, with the swimming portion running from June 18-25.

Selections were made primarily based on April’s Spanish Championships, though there was a line in the criteria that allowed team directors to choose additional athletes “for the benefit of the national team.” To automatically qualify, swimmers had to hit the FINA “A” standard at the Spanish Championships.

Spain didn’t have to parse any situations with more than two swimmers under the “A” standard.

The selection lists swimmers by events where they have hit the qualifying criteria per the Spanish selection. It also says that athletes might be given the opportunity to swim additional races, so long as it doesn’t impact their ability in the primary events listed below.

Spanish Team for the 2022 World Championships:

Included on the roster is Hugo Gonzalez, who just completed his last season of NCAA collegiate eligibility for the Cal Golden Bears in the United States. He is now the fastest-ever man in the 400 yard IM, though he hasn’t swum that race much internationally in recent years, focusing instead on the 200 IM and 100 backstroke.

Notably absent from the roster is Mireia Belmonte, who has struggled with injury over the last few years, but who still managed to place 4th at the Tokyo Olympic Games in the 400 IM. She is one of a number of Spanish blue-bloods who are not on this roster. In fact, only three members of the country’s Tokyo Olympics Team will swim at Worlds: Jessica Vall, Hugo Gonzalez, and Joan Lluis Pons.

That means a very young and inexperienced team for the Spaniards, though that is in theme with the status of the Spanish Federation: Ben Titley has begun his work informally as the head coach at the Sant Cugat NTC in Spain, and will formally take up that position later this year. Given the success that Canada saw after Titley’s arrival, big things could be on the horizon for Spain in the future.

Preliminary Roster for the European Championships

Spain also released a preliminary roster for the European Championships, though they declared that more swimmers could be added after the Mediterannean Games in early July.

Swimming at the European Championships will take place from August 11-17, 2022 in the Foro Italico.

Spain has confirmed two men’s relays and a mixed relay for the European Championships, but have not yet confirmed any women’s relays.

This meet will represent the first international selection for Carmen Weiler. The Spaniard who trains at the Nexus International School in Singapore, is Spain’s brightest young talent on the women’s side in several years, and in 2020 swam 54.98 in the 100 free at only 16 – a big barrier for Spanish swimmers.

Spain won three medals, one of each color, at the 2020 European Aquatics Championships. All three of those were taken by Hugo Gonzalez, including a gold in the 200 IM.

in Spain you need to qualify in April‘s Spanish Open, so Hugo did not swim under the expected time.