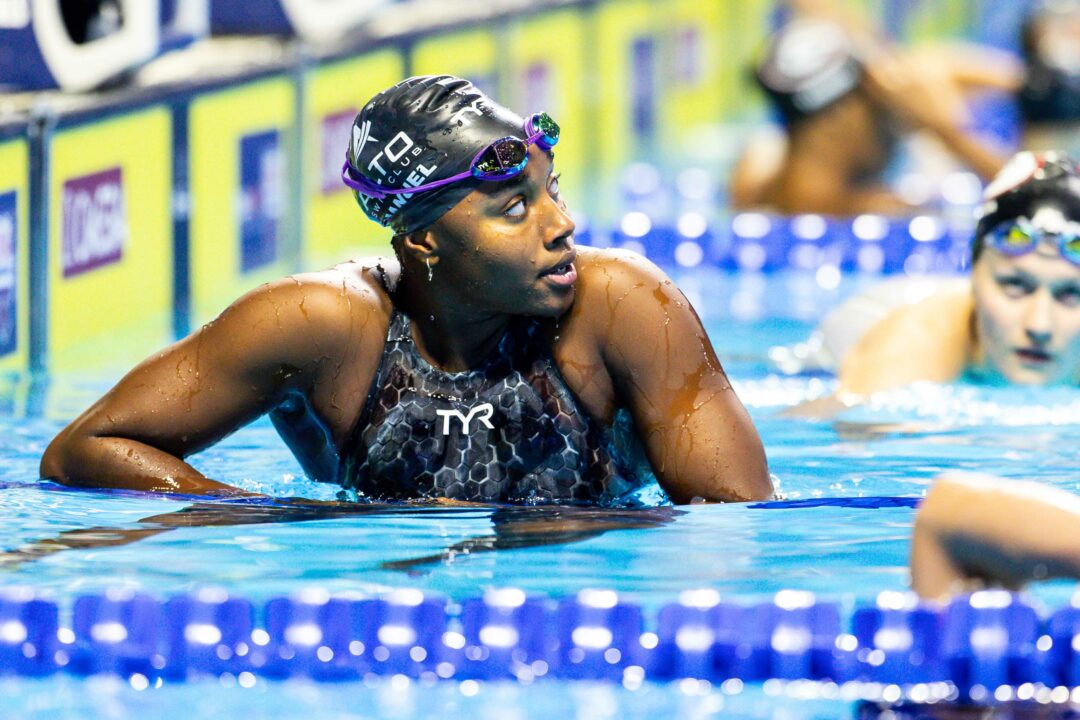 Simone Manuel's camp has remained quiet on her future in the sport, but she won't race at this week's US Olympic Trials. Archive photo via Jack Spitser/Spitser Photography

The 2022 USA Swimming International Team Trials are on a unique timeline by American swimming standards. Though April trials meets coming out of the NCAA Championships are common internationally, in the U.S., athletes usually have at least a few months to regroup before setting out again for another taper meet.

This is also an opportunity for some athletes as well. Those collegiate swimmers who have exhausted their eligibility don’t have as difficult of a decision to make about hanging on for another month, just to see what happens.

We’ve compiled a list of swimmers who would have been high seeds and probable A-Finalists in at least one event who are absent entirely from the psych sheets. Not just absent in an event, but not participating at all.

Swimmers Coming Out of the NCAA Season

Swimmers Who Have Started ‘Other Things’

I still wishes Simone well and greatness for her. I pray she doesn’t give up. She need to know her labor will not be in vain. 😔🙏 She has to to keep persevering.

No McLaughlin means no 1:55.3 split in the 800 free relay besides madden and ledecky….at this point

Has there ever been a major Trials meet 30-45 days after an NCAA Championships? The whole timing of this meet makes it difficult on the college crews because they are still in class after a spring of travel to conference and NC’s. I think we’re going to see a higher percentage of swimmers who’ve had a longer stretch of work preparing to make this team.

I know you’re probably only referring to US trials but a lot of times ones for other countries are. I remember when most of the team would have two weeks off after NCAAs, my international teammates would be back in the pool basically a day later prepping for their meets and then flying home to compete. So not unheard of to have swimmers compete at NCs and then go and swim at a trials meet but definitely new for US swimmers

Will there be a men’s version of this list?

He’s still getting tested by USADA.

@Braden Keith, where can we find those infos ?

Can you please give us the link of USADA’s testing pool ? ( I couldn’t find it )

They don’t publish the testing pool, just who they’ve tested.

I heard Ali Deloof and Catie Deloof are no longer training. Only Gabby Deloof is still training.

If there was ever a world champs to take off, this would be it

I doubt Simone Manuel knows what her future is at this point. I have not been diagnosed with OTS, but I was diagnosed with Chronic Fatigue Syndrome after a series of surgeries (9 in one year alone) left my immune system wrecked from the constant trauma. 10 months is not enough time to recover from this sort of setback. She needs real time off, followed by a very slow increase in activity. There is probably still too much uncertainty to make any statement about anything. If she’s still in testing protocols, that should be statement enough.