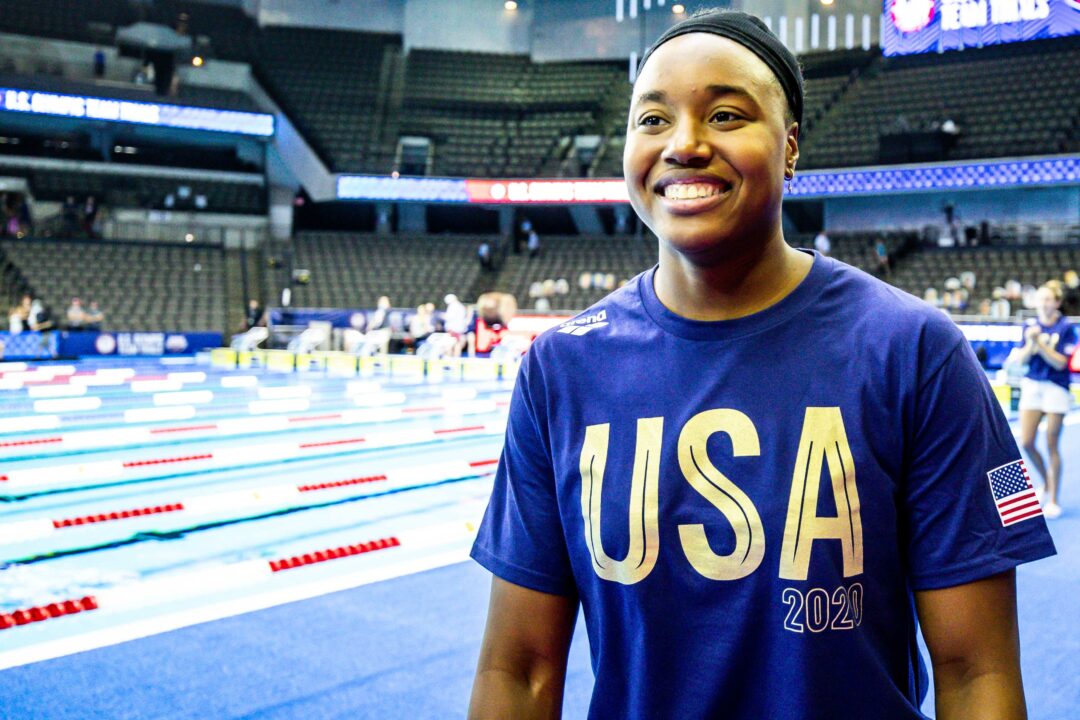 Manuel has been previously training at Stanford where she graduated from in spring 2018. On Saturday she was pictured in the Tennessee weight room. Archive photo via Jack Spitser/Spitser Photography

2-time Olympic Champion, 14-time NCAA champion, and 2020 US Olympic Team captain Simone Manuel, was featured in a social media post at the University of Tennessee on Saturday. Manuel has been previously training at Stanford where she graduated in spring 2018 with a degree in communications.

The picture was captioned “Going to miss @catiedeloof… she is so much fun and brings juice like her sister! You will always have an open door on #RockyTop!!!”

Catie DeLoof graduated from Michigan in 2019 and swam on the US 400 freestyle relay at the 2020 Tokyo Olympics. She trained at Virginia up until Tokyo, but has left that group.

Also seen in the picture is Manuel, who is flexing her arm with the group.

The picture was shared by most of the Tennessee coaching staff.

SwimSwam has reached out to the Tennessee coaches, Manuel, and Manuel’s agent but has not yet received a response. Manuel is (or has been) at least at Tennessee, but SwimSwam does not know for how long.

If this is a permanent move for Manuel, she will not be the first Stanford pro to have left training at Stanford in the past year. Katie Ledecky announced her move to train at Florida in September.

In March 2021, Manuel was diagnosed with Overtraining Syndrome and took three weeks out of the water into April. Manuel qualified for the 2020 Tokyo Olympics after finishing in first place in the 50 freestyle at the Olympic Trials. In addition to swimming the 50 freestyle, Manuel also swam on the women’s 400 freestyle relay.

Since the Olympics, Manuel has been named one of Forbes 30 Under 30 for the Class of 2022 in the sports category.

And make one day just for a Relay Carnival!

It’s a lot closer to home for her. UT wouldn’t be that great of a fit.

I meant THE UT (Texas), not ut (Tenessee)

Is Catie Deloof training at TN now? I thought I heard she was done swimming?

Like swimmer said about Comerford, does anyone know what happened to Gretchen Walsh this summer? She has had a phenomenal freshman season, breaking AR in 50 Back, and Swimming great times across multiple distances. She was 24.7/53.7 in 2019, and at trials this year she was 55.9 in the 100 (way off). He weird thing is that her 50 was a PB at 24.6, and she made finals in the 50. Anyone know why she had such spades of speed but not the endurance last summer?

Maybe she just had a bad swim? That can happen sometimes especially for a high school swimmer. Maybe the nerves got to her. She’s doing great now and has a bright future ahead of her!

Glad to hear that Simone is doing OK, hope that she is happy, wherever.

She had mono in the fall

From what I recall seeing on social media, I believe she had a long case of mono that severely impacted her training and she didn’t get back into the swing of things till not much before Trials.

Asking the question is one thing, but really just laying it on thick here, huh? Maybe wait for an answer before roasting such a great American sprinter.

So, it’s Mallory Comerford’s fault that no one else could swim faster than 54.1? Ok. I am sure she could kick your butt all over the place anyway.

I’m sorry, my intention wasn’t in any way shape or form intended to be mean. I’m sorry if I sounded rude, I was curious on what happened but I really should have been more cautious of people’s feelings.