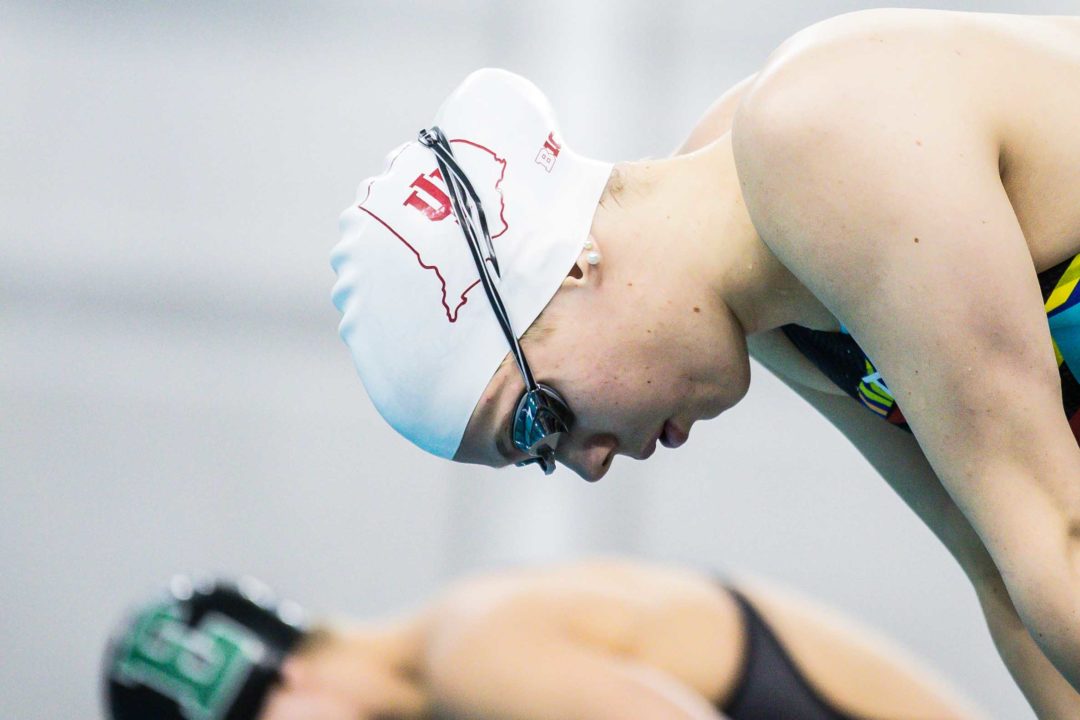 Peplowski, who was the Hoosiers' leading breaststroker last season, swept the breast events to open the season.

Cisternas set program and pool records as the Nittany Lions fell to Virginia Tech on the weekend.

IU held its annual Cream and Crimson intrasquad meet Friday night, with the Cream team emerging victorious in both the men’s and women’s meets. Cream was led on the women’s side by Noelle Peplowski, a senior who won all 3 of her individual races. Peplowski, who was the Hoosiers’ leading breaststroker last season, swept the breast events to open the season. She clocked a 1:01.65 to win the 100 breast, coming in just ahead of Cream teammate Emily Weiss, who touched in 1:02.46. Peplowski led from the start, splitting 29.00 on the first 50, before bringing it home in 32.65. She then went on to post a 2:12.96 in the 200 breast, pulling away from Crimson’s Mac Looze (2:14.42) on the 2nd half of the race. Peplowski finished 6th in the 200 breast at NCAAs in both 2019 and 2021 (the 2020 NCAAs were cancelled due to the COVID-19 pandemic).

Noelle went on to win the 200 IM in 2:00.89, holding off a vicious late charge by Looze (2:00.91). Looze was hauling coming home, especially at this early stage of the season, splitting 27.97 on the final 50 of the race. Peplowski was also a member of the winning Cream 200 medley relay, taking the breast leg. The results show inaccurate splits on the relays, however, Peplowski was joined by Cream teammates Kacey McKenna, Elizabeth Broshears, and Ashley Turak, and the squad finished in a final time of 1:40.31.

The Hoosiers saw 4 of their freshmen win events on Friday, including Peplowski’s younger sister, Anna. Anna Peplowski, representing Crimson, touched first in the women’s 100 free, posting a 50.91. It was a quality swim for the freshman, who enters the NCAA with a personal best of 50.10 in the event. The younger Peplowski nearly won the 200 free as well, as she was leading the race at the 100 mark (53.10), but was run down by Crimson teammate Ella Ristic on the back half. Ristic, a sophomore, swam a 1:49.17, while Peplowski finished in 1:49.84. Peplowski and Ristic also teamed up on the Crimson 200 free relay, helping lead the squad to victory in the event (1:34.22). Notably, Elizabeth Broshears appears to have anchored the Cream 200 free in 22.65. The relay splits at this meet are spotty, but if that time is accurate, it would be a really solid split from the sophomore at this stage of the season.

Freshman Mariah Denigan swam a brutal trio of events for the short intrasquad meet, racing the women’s 1000 free, 200 fly, then 500 free. Representing Cream, Denigan won both her freestyle events convincingly. She left little room for anyone else to challenge her in the 1000, leading the field by over 2 seconds at the 50 mark. That lead would expand to nearly 4 seconds by the 100 mark, and it would continue to grow through the end of the race. In the end, Denigan clocked a 9:58.17, a nice early season swim, though well off her personal best of 9:36.46.

Denigan was back in action later on, swimming a 4:50.85 to win the race. It looked tight between Denigan and Ella Ristic through the first 150 of the race, but Denigan was able to hold her early pace, while Ristic fell off. Ristic would go on to touch 2nd in 4:57.73.

In addition to her distance free prowess, Denigan is a 4:08.35 400 IMer. It appears overwhelmingly likely the 400 IM will be Denigan’s 3rd event at championship meets, however, the 400 IM typically isn’t competed in the NCAA dual meet format.

Freshmen Rafael Miroslaw and Josh Matheny also won events at the meet. Miroslaw (Cream) got out to the early lead in the men’s 100 free, and managed to expand that lead through the finish, posting a 44.69 to win. Behind Miroslaw, the field was extremely tight:

Notably, Bruno Blaskovic, the Hoosiers’ fastest sprinter, did not compete at this meet. Blaskovic had to pull out of last season in January due to a back injury, and he’s opted to use his 5th year eligibility this season.

Michael Brinegar, a two event US Olympic finalist, show that aerobic athletes are amazing machines. Three swims of 200 yards or longer: 200, 500 and 1000. In all three the first 100 was :52 seconds plus and the second 100 was 55 seconds plus. Energizer Bunnies unite!