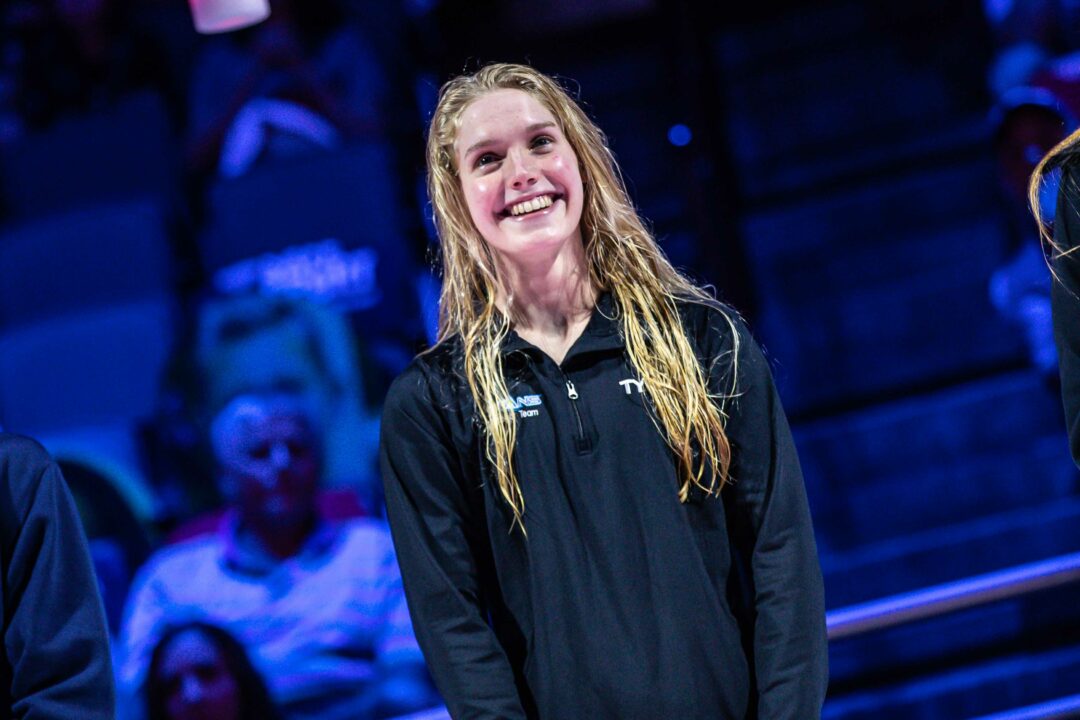 TAC Titans polyvalent talent Claire Curzan has finally decided where she will spend her collegiate career from 2022 to 2026. Archive photo via Jack Spitser/Spitser Photography

The long-anticipated announcement of where Claire Curzan will spend the next four years is here:

I am thrilled to finally announce my verbal commitment to continue my academic and athletic career at Stanford University! I could not of done this without my amazing coaches, teammates, and educators, and the endless support from my family and friends. I’m truly blessed and can’t wait to join the farm!! #fearthetree🌲❤️

Curzan is a senior Cardinal Gibbons High School in Raleigh, North Carolina. She swims club with TAC Titans and is the number one recruit from the high school class of 2022.

That gives Stanford the top-two recruits in the class (Curzan and #2 Charlotte Hook), as well as #7 Lucy Bell, #15 Kayla Wilson, #17 Sophie Duncan, and unranked but listed in the honorable mention or “Best of the Rest” sections, Natalie Mannion, Gigi Johnson, and Kirsti McEnroe.

Curzan is a superlative swimmer across the board, but really stands out in sprint free, back, and fly. She is already fast enough to score in the A finals of six individual events (100/200 fly, 100/200 back, 50/100 free) at NCAAs, exactly twice the number she would be allowed to swim. That kind of flexibility will allow head coach Greg Meehan to use her wherever they need the most points. Considering that Stanford will also have current World Record-holder in the 200 back and former WR holder in the 100 back, Regan Smith, and current American Record-holder in the 100 butterfly, Torri Huske, by the time Curzan gets to campus, that will give Meehan all kinds of options.

In LCM, Curzan is also the third-fastest American 100 flyer in history. She earned that distinction with a 56.20 from April 2021. At Olympic Trials two months later, she finished second in the final with 56.43, earning a berth on the U.S. Olympic Team. In Tokyo, she placed 10th in the semifinals of the 100 fly and also swam the fly leg in prelims of the women’s 4×100 medley relay. She earned a silver medal when the Americans came in second in the final.

Having just turned 17 on June 30, Curzan hasn’t yet begun her assault on the 17/18 NAG Record books, but in the last four-and-a-half years, she has amassed ten individual NAGs:

Does anyone think the decision might also have to do with the NIL law that CA allows athletes to get endorsement while it is prohibited in Virginia?

No. The rules will be more standardized by the time she starts her college career.

If she keeps up the hard work, she could make the 4×100 MR. Not there yet, but I see potential.

3
-2
Reply
what a team
Reply to  ReneDescartes

Yes, RD you saw the tea leaves well, but of course it wasnt just 3 on the list. The Stanford class of 8 swimmers has 5 in top 20 and 3 that would rank top 40. The clean sweep of the 2 highest level TAC swimmers was a surprise to me. This group going to Stanford has none in-state. All East Coast from Boston to Boca, except for Bell from CO club that had Bartel years back. Plus there is an international diver in this years class of 2021. In the May comments section there was a interesting thread about drawing swimmers from out of state. And in addition one insightful reader who clarified:
*come here because we have… Read more »

My God. Think of what she could go in a 200 IM SCY if she focused on it. Those would be insane races with Walsh and Douglas.

Happy Monday
Congrats, Claire. As someone with no skin in this game, I think how you engaged in this decision shows how much you care about the people around you and doing what is right. I’d say in an age where most everyone wants an answer now and thought -filled decisions are somewhat frowned upon for a answer yesterday, you maybe showed us more about your character in this process than any amazing swim ever has. So, like I wish every kid – be happy and safe. Have a humble confidence – It’s ok to take a step back to figure things out.

to link to a instagram post and then collect clicks without mentioning the school in headline, well played, miss, well played.

Amazing Talent. Claire, her family and the exceptional TAC staff and athletes should be very Proud.

Hats off to the correspondent and SwimSwam for putting together an A+article with just the right focus. Great Job after the unbelievable garbled effort just a few days ago, previewing Stanford Womens Swim for this season