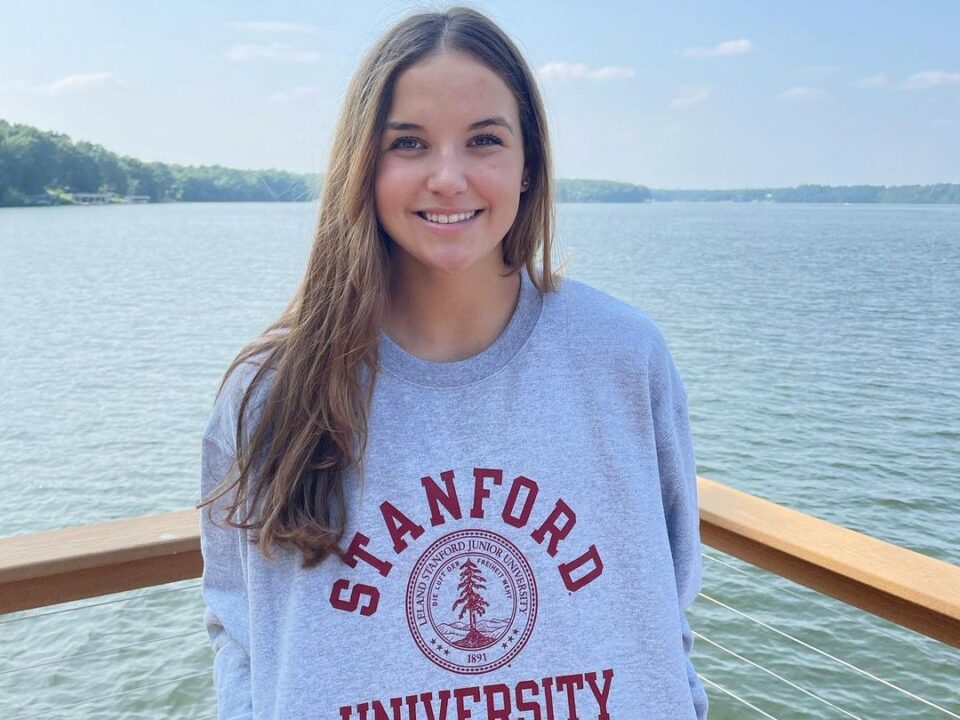 USA Swimming National Team member Charlotte Hook has announced her verbal commitment to Stanford University’s class of 2026. The Raleigh, North Carolina native is #2 on SwimSwam’s list of the top 20 recruits from the high school class of 2022.

“I am so honored and excited to officially announce my commitment to further my academic and athletic career at Stanford University; it really is a dream come true! A huge thank you to all my coaches who have helped me reach this point and to my friends and family for their endless support. I can’t wait to be a part of such an amazing team and school!🌲❤️ #fearthetree”

Hook earned her first Olympic Trials Wave II qualification in the 200 fly in the summer of 2019, originally at Pro Swim Series Indy, then later winning the B final at Summer Nationals after which she was selected to represent the United States at World Junior Championships. In Budapest, she picked up a bronze medal in the 200 fly, finishing behind fellow American and future Stanford teammate Lillie Nordmann and Hungarian Blanka Berecz.

It’s getting kinda boring…Stanford/UVA/Maybe one other school, wash-rinse-repeat.

It’s interesting that Cal just doesn’t get these kind of recruits any more despite having great results the last several years.

Teri’s reputation precedes her. Once she leaves the women’s program will have recruiting success again.

No photo-shopped images of her swimming – and she actually took the SAT! Good going Charlotte – welcome to Leland Stanford Junior University.

For D1 NCAA eligibility, all the kids have to take the SAT or ACT.

This is not true. The NCAA temporarily dropped the SAT/ACT requirements for the Classes of 21, 22, and I think even 23.

I think they are joking about the admissions scandal.

The competition for Charlotte Hook:

darn if only she was more well rounded…

The NCAA are already getting very exciting. Stanford will be adding T. Ruck, R. Smith,T. Huske, and returning B. Forde for yr5, and the Nordmann sisters, and two divers who red shirted, plus many very good swimmers from last year, and a bunch( six?) of highly ranked freshman. Yes UVA has their four Olympians, But Stanford will be at Full strength this year. Oh, and then there is always Cal. This will be a very exciting year and only three years till the next Olympics.

Is Madden coming back?

Can you change the first part of your username to reflect this (Regan) distinction?

I believe they are also getting the younger Walsh as well!

Are we sure Ruck is coming back to Stanford? Sounds like she might need to take some time to focus on some personal issues.

You guys with this Meehan is trash narrative are really hilarious.

fortunately, Meehan doesn’t have to deal with the Mixed Medley Relay at NCAAs…..

its all about depth! looking forward!