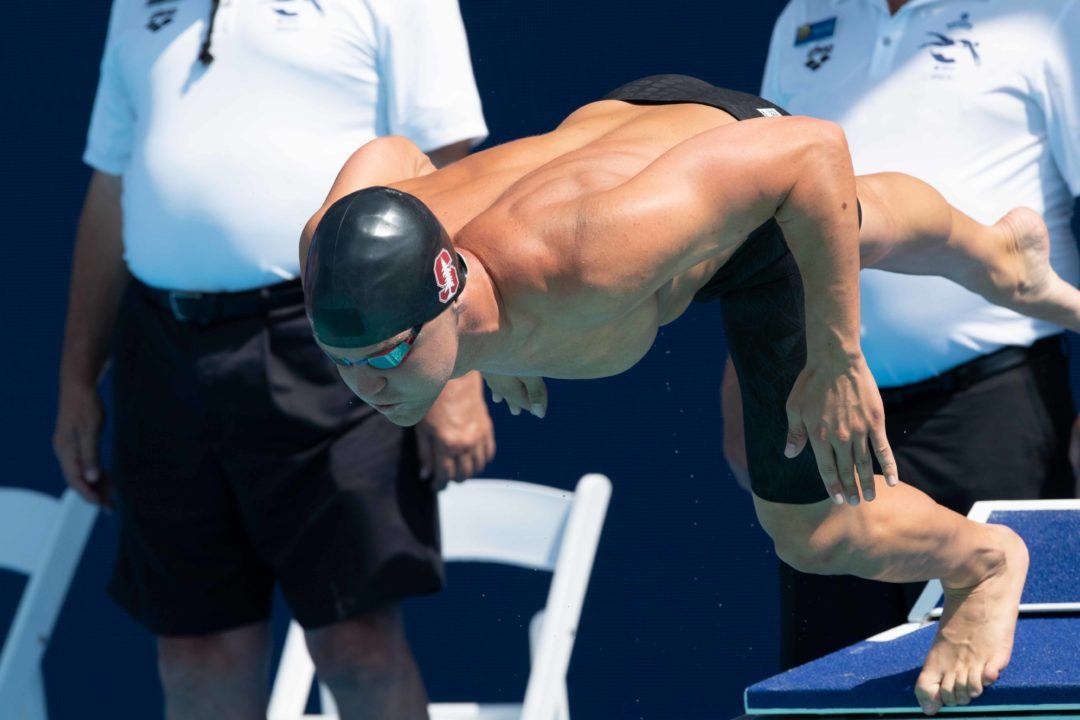 Shoults, who took a redshirt last season, is a 2-time Pac-12 champ in the 500 free, while USC's Johansson is the reigning champion in the event. Archive photo via Mike Lewis/Ola Vista Photography

The Stanford men are undefeated against conference rivals this season with only one meet remaining. On Saturday, the Cardinal picked up a win against USC, dominating on the road.

The men’s 1000 free saw a battle of Pac-12 Champions. Stanford’s Grant Shoults, who took a redshirt last season, is a 2-time Pac-12 champ in the 500 free, while USC’s Victor Johansson is the reigning Pac-12 champion in that event. They were closely matched at the halfway point, with Shoults holding a slight lead. Johansson pulled a nail ahead over the next 200 yards, but Shoults made his move to distance himself as he won by over a body length, 9:05.70 to 9:08.86. That was Shoults’ only individual race.

USC’s Alexei Sancov was a double event winner for the Trojans. In the 200 free, Sancov slightly outpaced Stanford’s Will Macmillan on the front half. He then stretched his lead out to a full second. Macmillan kicked it into gear down the stretch, but came up just short as Sancov won it 1:37.54 to 1:37.72. Later on, Sancov won the 100 fly in 48.23.

LOS ANGELES – No. 16 Stanford remained unbeaten in conference play, producing a 190-109 victory over No. 18 USC on Saturday afternoon in its lone road dual meet of the season.

The Cardinal (4-0, 3-0 Pac-12), which was coming off a homestand sweep of Arizona State and Arizona two weeks ago, captured 11 of the 16 overall events.

Next up USC will travel to Utah on Saturday (Feb. 22) for their final dual meet of the season.

That ‘one meet remaining’ is a tad more difficult