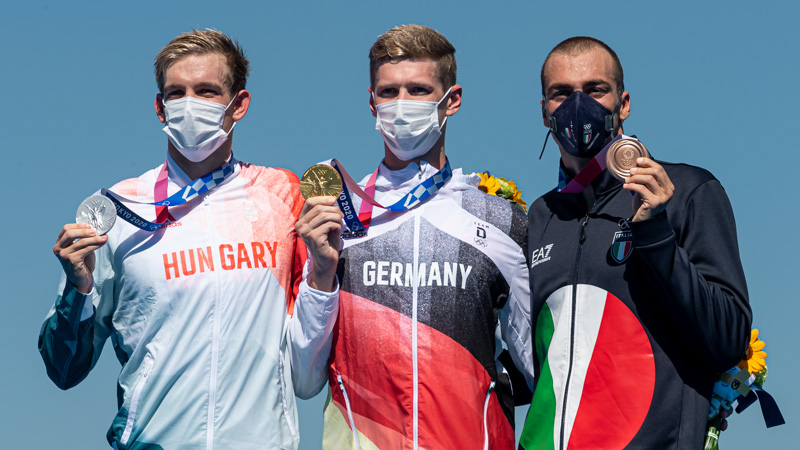 The open water swimming competition in Tokyo wrapped up on Wednesday with Germany’s Florian Wellbrock claiming the gold medal in the men’s 10k event, while one day prior, Brazilian Ana Marcela Cunha won the women’s race.

The women’s 10k ended up being incredibly tight at the finish, with gold and silver separated by less than a second and top seven finishers all within 7.1 seconds of one another.

The men’s event saw Wellbrock, who was coming off of winning bronze in the 1500 freestyle in the pool last week (and taking fourth in the 800), dominate in a time of 1:48:33.7, 25 seconds clear of runner-up Kristof Rasovszky of Hungary.

Another pool swimming medalist, Italy’s Gregorio Paltrinieri, won bronze in 1:49:01.1, two seconds back of Rasovszky. Paltrinieri was the silver medalist in the men’s 800 free in the pool and added a fourth-place finish in the 1500.

Just as we did with the pool swimming competition in Tokyo, you can find a breakdown of the open water results from the Games below.

While no official records for the open water events are kept due to the variability of the courses and conditions, Wellbrock’s winning time was the fastest ever recorded in the men’s event at the Games, which made its debut in 2008.

The previous-fastest was Ous Mellouli‘s 1:49:55.1 from the 2012 Olympics Games in London. The top five finishers in Tokyo all got under that, led by Wellbrock, who was over one minute and 21 seconds quicker.

The fastest time ever recorded in the women’s event at the Olympics was done by Sharon van Rouwendaal, who clocked 1:56:32.1 at the 2016 Games in Rio. van Rouwendaal was the silver medalist in Tokyo, finishing a close second to Cunha.

Wellbrock was relieved not to see Finke in the race

When is the US going to get its act together with OW? 6-7–10th isn’t a great showing. Please bring on Finke! K Smith has dabbled. I don’t think Bobby has tried it at all. Getting Sullivan back in there would be good too

Florian swam away from everyone on the last lap and won by a wide margin.

He’s the best 10K swimmer in the world, no question.

Too bad Katie Ledecky doesn’t swim open water. Seems like she would be a lock for the gold.

Ledecky probably would win the open water swim with relative ease if she trained even briefly for it. The gap in speed is way too big to overcome.

Agree regarding appreciating these swimmers though.

I have total respect and admiration for Haley Anderson, Ashley Twitchell, and Jordan Willomsky. All awesome swimmers!

Bringing someone like Katie Ledecky or Bobby Finke to open water would be good for the sport and possibly attract more open water swimmers. I wish open water got more coverage. It is a great event.

It’s a different stroke, and for all we know she could be as inefficient at getting her head up to sight as MA is at breathing freestyle. She likely has talent for the event aerobically, but there’s no telling how smoothly she could transition her skill set. Especially given how high her turnover is for a distance swimmer.

The gap in speed is way too big.

Her endurance will hold up fine, obviously. Small technical issues do have the chance to snowball.

But the Olympic Bronze medalist in the open water can barely swim faster than prime Ledecky did in the 800 in her 200.

2016 Ledecky would have won the open water by a mile.

If someone else’s easy swimming is faster than your fast swimming then you can’t beat them.