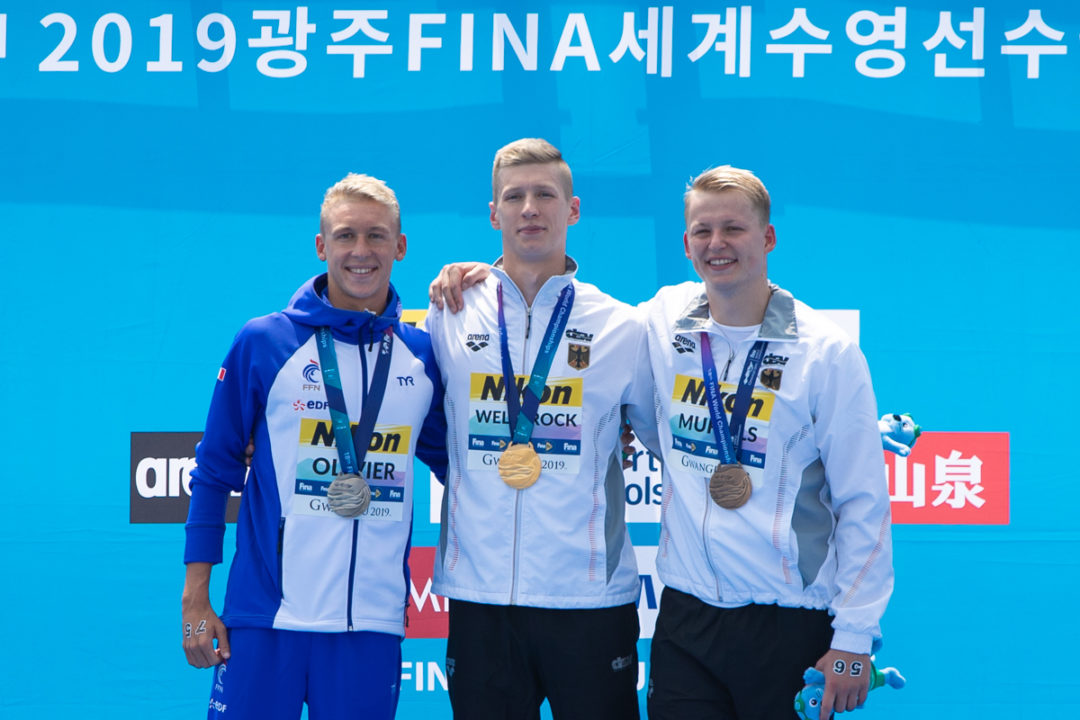 By the nature of open water swimming, it's hard to predict who winners will be. But, it sure does make for thrilling finishes. Archive photo via “Rafael/Domeyko Photography”

While the pool swimming in Tokyo, Japan concluded on Sunday morning, there are still a pair of races remaining at the Olympic Games in open water.

Weather conditions, both as they relate to their competitive impact and the safety of the athletes, are always a focus of open water swimming.

The official weather report for the event (seen here) calls for sunny weather and heat on race day. The races are scheduled to start at 6:30 local time each day, which should avoid the worst of the heat. At the start of the men’s race on Wednesday, official forecasts call for air temperatures of about 81 Fahrenheit (27C), and a little cooler (78F/26C) for the women’s race on Thursday.

FINA and the IOC announced on Tuesday that they had updated the course configuration for the event, though they didn’t clarify why. The course will now be 7 laps and 13 checkpoints. Most races at this level have fewer laps of a larger course. This should make the event a little more spectator friendly, but also will put more pressure on athletes’ technical abilities around turns.

Organizers have been continually criticized for the level of pollutants detected in the course. After a lot of remediation efforts, recent reports have still found high levels of contaminants in the venue, but Olympic officials are confident that they can overcome even recent stormy conditions that triggered a surge of sewage water into Tokyo Bay.

The triathlon events used the same water earlier in the Olympics and aside from a 15 minute delay for rain, no issues have been reported from those athletes.

The obvious starting point for favorites is to look at the medalists from the 2019 World Championships. There, Florian Wellbrock took gold in the men’s race before going on to win the 1500 in the pool.

In Tokyo, that schedule is flipped. Among the victims of Bobby Finke’s unprecedented final 50 meter break for gold, Wellbrock led much of the race but wound up with a bronze medal.

Based on recent results, he’ll face another battle-to-the-wire here, with the three medalists (Marc-Antoine Olivier of France and Rob Muffels of Germany) finishing just 2 and 1.5 seconds behind him in Gwangju.

Another to keep an eye out for is Gregorio Paltrinieri. The Italian, a 2016 Olympic champion in the 1500 free, switched coaches in the leadup to the Olympics to give more focus to his open water swimming. While he says he’s still engaged in the pool, and his Olympic silver medal in the 800 free supports that, his stroke last week appeared built much more for open water than the pool.

Hungary’s Kristof Rasovsky, American Jordan Wilimovsky, and Netherlands’ Ferry Weertman are all past World and/or Olympic champions in open water as well.

ON the women’s side, the medalists at the World Championships in 2019 were Xin Xin of China, Haley Anderson of the United States, and Rachele Bruni of Italy.

But the women’s race, even moreso than the men’s race, was an absolute burner coming down to the finish. The top 13 finishers (including Lara Grangeon of France, Ana Marcela Cunha of Brazil, Ashley Twichell of the United States, and Kareena Lee of Australia) were within 5 seconds of the leader. Big names like Aurelie Muller of France, at the time the two-time defending World Champion in the event, finished out of the top 10 and because of the one-per-country rule, out of the Olympic Games.

Athletes qualified for the Olympics via one of three routes. The traditional path qualifies athletes first by finishing in the top 10 of either 10k at the World Championships. After that, in June, each country without athletes already qualified for the 10k at the Olympics could send up to 10 men and 10 women to race at the Open Water Qualifying race in Setubal, Portugal. There, the top 10 finishers, plus the next-fastest swimmer from each FINA continent (Asia, Europe, Australia, Africa, and the Americas) also qualified.

The only way for a country to earn multiple qualifications in a men’s or women’s race was for both entries at the World Championships to finish in the top 10. Though countries could send two swimmers to the qualifying event in Portugal per gender, only the top finisher was eligible for consideration in selection.

This year, we’ve seen an abnormal third route: through litigation in the Court of Arbitration for Sport. After some confusion, and apparent mis-publicization of the Asian Open Water Swimming Championships as an Olympic qualifier, Kazakhstan’s Vitaly Khudyakov appealed to the CAS to be granted a spot in the Olympics.

FINA eventually received permission from the IOC for an exception to the qualifying rules, meaning there are 26 male entrants in the race.

Article shows like first OpenWater event is for Men, which is incorrect.

Agree with Fato, Women on Wednesday and Men on Thursday (local time).

The Women’s OW is live right now. Coming towards the closing stages (last 25-30 mins). Twichell is leading a group.

400m to go. Van Rouwendaal is right there.