Gregorio Paltrinieri Talks Coaching Change: ‘I Had Lost Any Kind of Stimulus’ 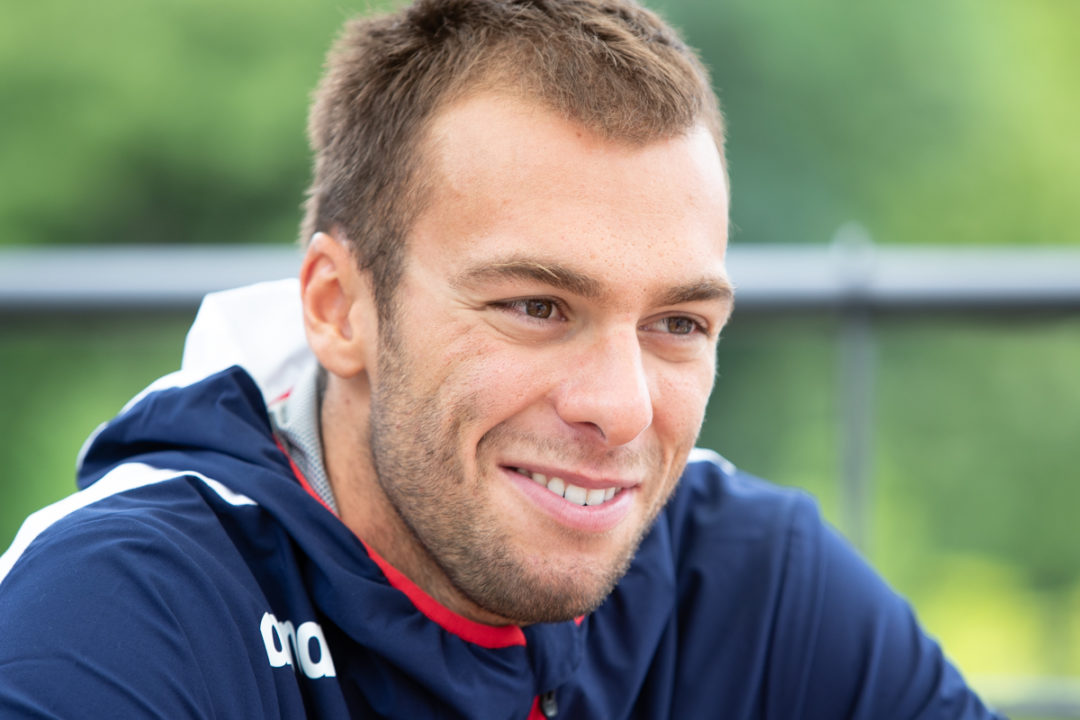 Paltrinieri discussed his reasoning for switching coaches and shifting his focus to open water swimming on a video conference call. Archive photo via “Rafael/Domeyko Photography”

In the wake of announcing that he would be parting with longtime coach Stefano Morini after nine years together to train under open water coach Fabrizio Antonelli, Italian Olympic champion Gregorio Paltrinieri offered some background on why he made the change.

“It all started with the fact that the Olympics have been postponed. From that point I started thinking about them and then it didn’t take me too long to reach the conclusion that I should change,” he said on a video conference call, translated from Italian.

He goes on to say that he needed a change of scenery from training at the Federal Center of Ostia. Paltrinieri, now 25, had trained and lived in Ostia since he was 16.

“I decided to change because I wouldn’t have been able to do another 15 months in Ostia. The reasons are varied. But I just want to say that I had lost any kind of stimulus and this is probably something dictated by me growing up, too. Maybe I need other things too. I came to training and wondered what I was doing, I didn’t see a goal in all this. I was also very scared of the fact that I arrived most of the time unmotivated. I was really wondering how I would get to an Olympiad next year in this situation, and I couldn’t afford that.”

“I think after so many years in a place it’s normal at some point to want to change. I believe that everything we could do here we did. We have done our best, we have achieved great results, which I would not have imagined in these nine years.”

Paltrinieri acknowledged that he was still performing well in the pool, but that the mental aspect of the sport has been a struggle as of late.

“The results were coming. I won the world championship a few months ago and short course Europeans. But mentally, the situation was deteriorating,” he said. “This I noticed day after day. I went into the water and asked myself ‘what am I doing?’ The desire to swim was passing me. I no longer enjoyed doing anything. Mental tranquility is very important, and I no longer had it.”

As for why he picked Antonelli specifically, Paltrinieri said the young coach’s training methods are exciting.

“I would say that he is the person I trust most of all among the current coaches in Italy. And open water races are what I’ve been dealing with most int he last season. I got to know him. I like him as a person. I do not deny that he is a young coach, and it is probably something that stimulates me and motivates me – a young coach with young training methods.”

Paltrinieri, who is relatively new to open water, says he still has his sights set on winning Olympic gold in the pool and open water at one Olympics.

“I wouldn’t leave the pool for any reason now. I’m too ambitious about my idea of ​​the Tokyo Olympics (taking the title both in the pool and open water) to do it. I know that the results in the pool may not come at first. We are 15 months away. First of all, I aim to establish a good relationship with [Antonelli].”

Finally, he touched on his long-time connection to open water swimming and talked about getting his start in the field.

“I’ve always liked the sea. In fact, I started right there. Before arriving in Ostia I had set the new Italian record in the 3km in open water. At 13/14-years-old it was my springboard. In Ostia, the program then changed and the open-water swimming went into the background, now no longer. ”

I don’t get your point, he is a pro swimmer and was interviewed about his professional choices. I am in Italy too but I don’t talk about the pandemics all the time. That doesn’t mean I don’t care.

Probably a non-european who thinks that what all europeans do and should do is carry the burden of the Coronavirus and think about it constantly. I never understood that mentality. It’s like saying that the only thing cancer patients should think and talk about is their disease and suffering. :/

Yes non European who has an honest care factor of about 2/10 for Europe . Still it is annoying for someone who has the rare opportunity to live & train as a professional athlete to complain exactly about that . One would hope a pandemic would broaden his perspective .

Is that all he has got to think about?

” Venice is on its knees ‘ said the Mayor Apri 21. No tourism , no maintenance. He is extrem e my fortunate his onl y worries are his stimulus to train as he sits amongst a ruined nation .