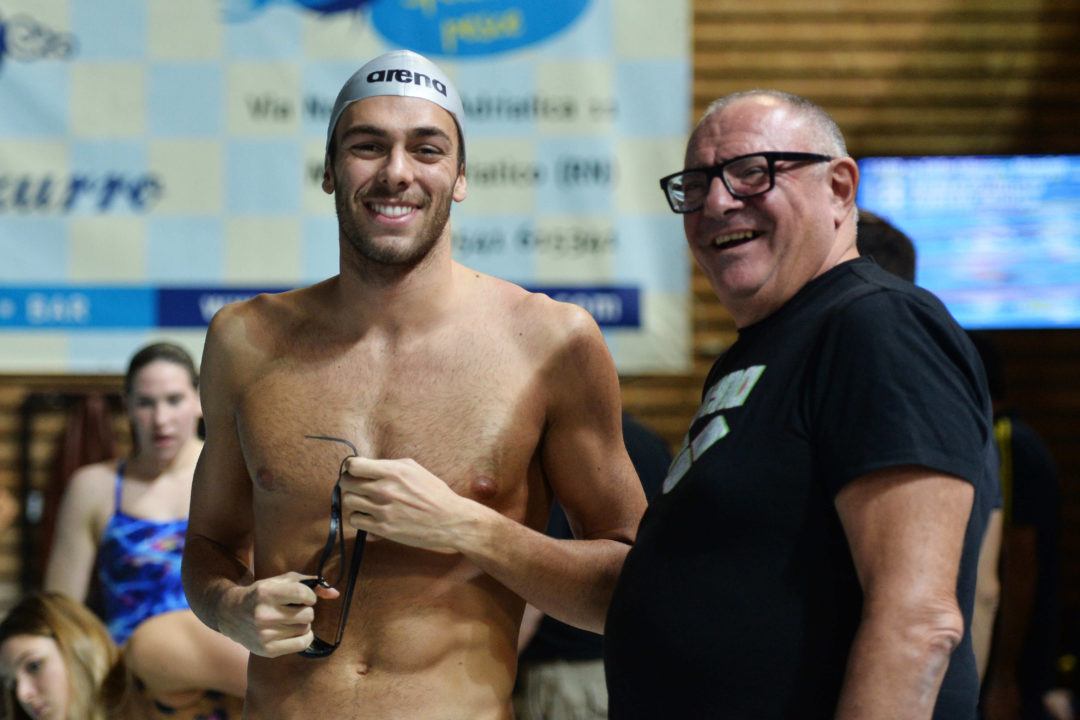 SwimSwam Italia’s Giusy Cisale broke the news on Monday morning that Gregorio Paltrinieri, the defending Olympic champion in the men’s 1500 freestyle, will leave his coach and club to train under Fabrizio Antonelli. This ends a 9 year tenure training at the Federal Center of Ostia and registered under the club Coopernuoto and Flamme Oro, interrupted only by a season training in Australia alongside that country’s top distance swimmer Mack Horton.

Antonelli is the coach of the Italian National Team in open water. While Paltrinieri has continued to race in the pool, in the last couple of years he’s shifted more focus to open water. That includes winning silver as part of the team event in open water at the 2019 World Championships.

At those World Championships in Gwangju, Paltrinieri booked an Olympic spot in open water via a 6th-place finish in the premier men’s 10km event, but also added a pair in the pool via a gold in the 800 free in a new European Record of 7:39.27 and a bronze in the 1500 free. The 800 free will be added to the Olympic schedule for the first time next year in Tokyo.

The 25-year old Paltrinieri also won the U.S. National Championship in the 10km race in 2019, among other events.

Paltrinieri released this statement on Monday:

“Without the Moro (Morini) I would never have become a champion.

You would never want certain stories to end.

Morini was much more than just a coach.

I arrived at the Federal Center with dreams, hopes, and goals, and we hit almost everyone. I was a kid and now I’m a man. Just to think that when I arrived I shared the room with (Fellow World Champion Gabriele) Detti, we were teenagers. In the meantime we have graduated, we have earned medal after medal. We have conquered the single room apartment and now I live in my house, a few meters from the center with my partner, Letizia.

Morini is the best coach who could train me, grow me, follow me in life and on the poolside. Our relationship goes far beyond the swimming pool, it is one of family.

Also for this reason I believe it is right to make this choice; It is as if a child communicates to his family that he goes to live outside the home, with all the accompanying responsibilities. It is a further moment of growth. At the same time I also feel excitement because I can immerse myself totally in another type of project, with enormous stimuli and equal ambitions. I feel the need to confront a coach who is more specialized in open water swimming. That’s a discipline that I love since I was a kid and in which I strongly believe. Therefore I have identified together with the technical-managerial staff of the federation Fabrizio Antonelli.’

Also leaving the training center at Ostia in Rome will be coach Domenico Acarenza, who will join the new project.

As for the former coach, Morini, he was vocal about his disappointment of the decision and the fact that he won’t get to train Paltrinieri to the Olympics, but said he will always be available if his former swimmer ever needs him. Morini echoed Paltrinieri’s sentiments about the two being family.

“I don’t hide the displeasure with this choice.

While understanding the reasons, I would have preferred to complete the Olympic cycle; bring it to Tokyo taking care of the work in the pool and that in open water in synergy with the technical staff of the national team.

The objectives were clear. Defend the Olympic gold won in the 1500 from Rio de Janeiro, try to win the 800 of which he is world champion, and be as competitive as possible in the 10 kilometers.

But Gregorio needs a different contribution, which provides for greater space and impact of the fund in training programs and competitions.

Obviously I will always be available for any needs.

As he said, our relationship goes beyond that between coach and athlete and his choice does not affect our technical and emotional bond.

I hope you find what you’re looking for. Gregorio is a champion in training, in competition and in life. We have lived together nine years of great triumphs that continue to move me. We will continue to write other distant ones, but united. That’s a slogan that is really good in this period.”

Antonelli’s group includes Rachele Bruni, Giulia Gabrielleschi, and Arianna Brindi. Bruni, like Paltrinieri, qualified for the Olympics after winning a bronze medal in the 10km race at the World Championships in 2019. Bridi was 13th in that trace, which freezes her out of Tokyo, while Gabrielleschi finished 6th at Worlds in the non-Olympic 5km open water event.

As the song goes, a sucker for pain

Geez, what a glutton for punishment. Quite the stud.

Hopefully he can still put up a good effort in the 1500, or at least decide to swim it. He has, in my opinion, the most fun stroke to watch, and I’ll miss his smooth but frantic turnover alongside the lazy long glides of Romanchuk and Wellbröck.

Maybe but it seems he is putting the pool to one side for now.