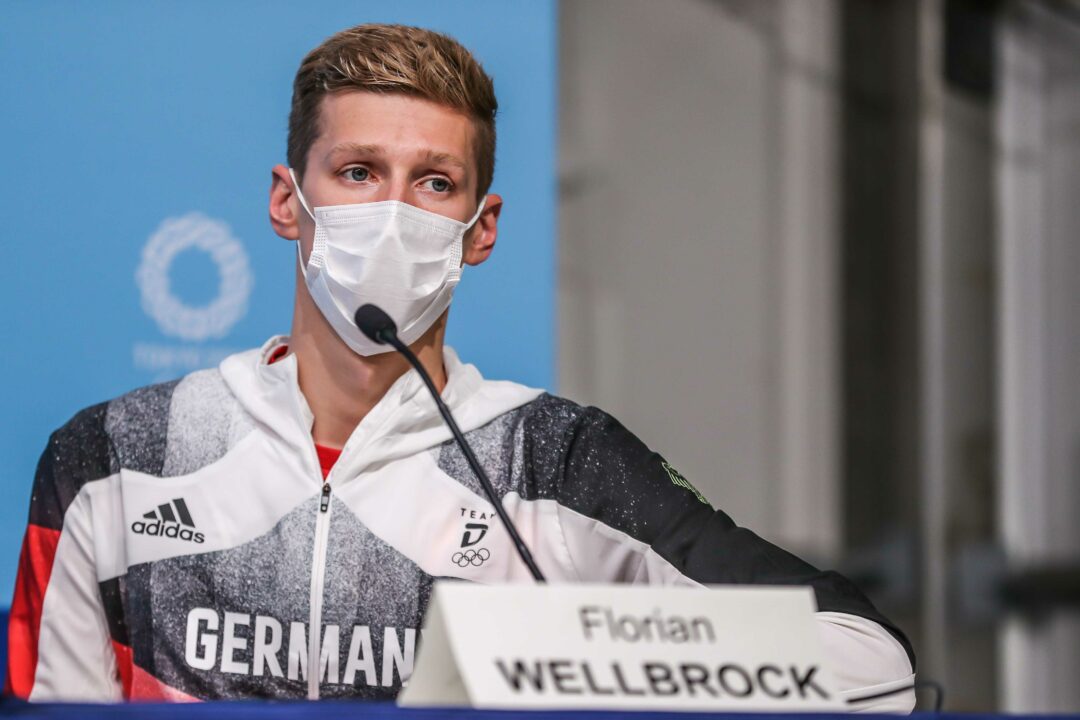 Less than a week after finishing 3rd in the pool during the men’s 1500 free, Florian Wellbrock won gold the men’s 10k Open Water race at the 2020 Tokyo Olympics. He finished the race 25 seconds ahead of silver-medalist Kristof Rasovszky of Hungary for the top spot. Italy’s Gregorio Paltinieri finished third for the bronze medal.

Earlier in the Games, Wellbrock and Paltinieri swam the 800 and 1500-meter free, with Wellbrock earning bronze in the 1500 and Paltrinieri silver in the 800 in the pool. They came back for the open water race, ready to show off their endurance.

Wellbrock led for the entirety of the race. At the end of lap 5 of 7, he was only 3 seconds ahead of Rasovszky who was in second. In the final three kilometers, he increased his pace steadily until no other competitor could catch him, finishing in 1:48.33.7.

The race for second was much closer. Rasovszky and Paltrinieri battled it out in the final stretch for the silver medal. At the 9.5 km mark, Paltrinieri trailed the Hungarian by 9 seconds. He tried to catch him in the end, but he ultimately touched 2 seconds behind Rasovszky.

Rasovszky was the 2019 World champion in the men’s open water 5k and he finished 4th in the 10k. Wellbrock was the gold medalist in the 10k in Gwangju.

2016 Rio gold medalist Ferry Weertman of the Netherlands finished 7th in the race, right behind Frenchman Marc-Antoine Olivier who was third in Rio. Olivier finished second at the 2019 World Championships but missed the today podium by over a minute. Jordan Wilimovsky of the USA was third at Worlds but failed to finish in the top 8 in Tokyo, coming in 10th.

Ous Mellouli was also in today’s 10k open water race. The 2012 Olympic champion finished 20th. His attendance was uncertain in the days leading up to the Olympics due to a scandal between him, his mother, and the Tunisian Swimming Federation. He settled matters with the Federation a few days later and decided to compete in the race for his country.

Mellouli is the only swimmer to have won Olympic gold in both open water and pool swimming. He earned a bronze medal in the men’s 1500 the same year that he won the men’s 10k. Four years earlier, he won gold in the 1500 in Beijing.

Rowdy Talk: I put on the highlights of this, and near the end Rowdy goes, “I’d never do this in the pool, but this race is OVER” when Wellbrock was up by idk, 20 seconds with maybe another 5 minutes of racing to go.

I started watching replays of Olympic Trials, so I’m on Day 1 right now and he said both 4 IMs were over – Foster and Margalis making the team – before they both got absolutely run down and didn’t make the team.

Thanks to coming to my RowdyTalk.

Wellbrock and Paltrinieri swam heats and finals of the 800 & 1500, and then score gold and bronze in the marathon in 84.7 degree water. Paltrinieri was diagnosed with mono in June. Amazing. Easily the toughest schedule of the Olympics.

Hope this prompts Ledecky to open water. A move to Sandpipers would certainly put her on that path considering who her training partners would be. I actually doubt that would occur, but Ledecky in open water would change the dynamics of the women’s 10K.

As a side note, Rowdy Gaines erroneously claimed during the telecast that women are as fast, or nearly as fast, as men in the 10K. This is patently false. Elite women actually start catching… Read more »

Very rare to see that kind of domination in an OW race.

Off topic but the fiasco continues for USA in athletics.
I’m shocked that Grant Holloway didn’t win the gold in the men’s 100m hurdles. He’s such an amazing gifted athlete. He clearly peaked like so many other Americans for the olympic trials where he almost broke the world record in 12.81.
But the height of the fiasco was reached by the men’s 4X100 free relay which didn’t make the final! What a humiliation! At least they will not drop the baton in final as they are used to doing it. 😆
Seriously what a fiasco in sprint overall. Only one gold in the women’s 400m hurdles with Sydney McLaughlin.
I will not blame US female sprinters.… Read more »

3 Ukrainian ladies in the high jump final on Saturday. Mahuchickh has a 2m10 potential I think

Congrats to Wellbrock. He controlled the race from the start to finish.
Disappointing MAO for France. The gold was his goal. No Lucas’ magic here for once.
No open water medal for France like for USA.

Wonder if his decision to skip some feeding stops in that heat played a factor in his result. He was in the mix for awhile.

That’s what the ladies did too, didn’t seem to pay off for them either :/

I wonder how fast Paltrinieri could have been if he didn’t had a mononucleosis a few weeks before.

Well deserved win after pretty much leading from start to finish

Wellbrock’s pace at the end was so intense that it destroyed the pack. Incredible time too, averages to 1:04.8 per 100 m (assuming distances are correctly measured, of course). I think he negative split the race, because at the half-way point he was at a 1:05.6 pace (or something like that, but it was over 1:05). Usually these races are tightly bunched until the end.