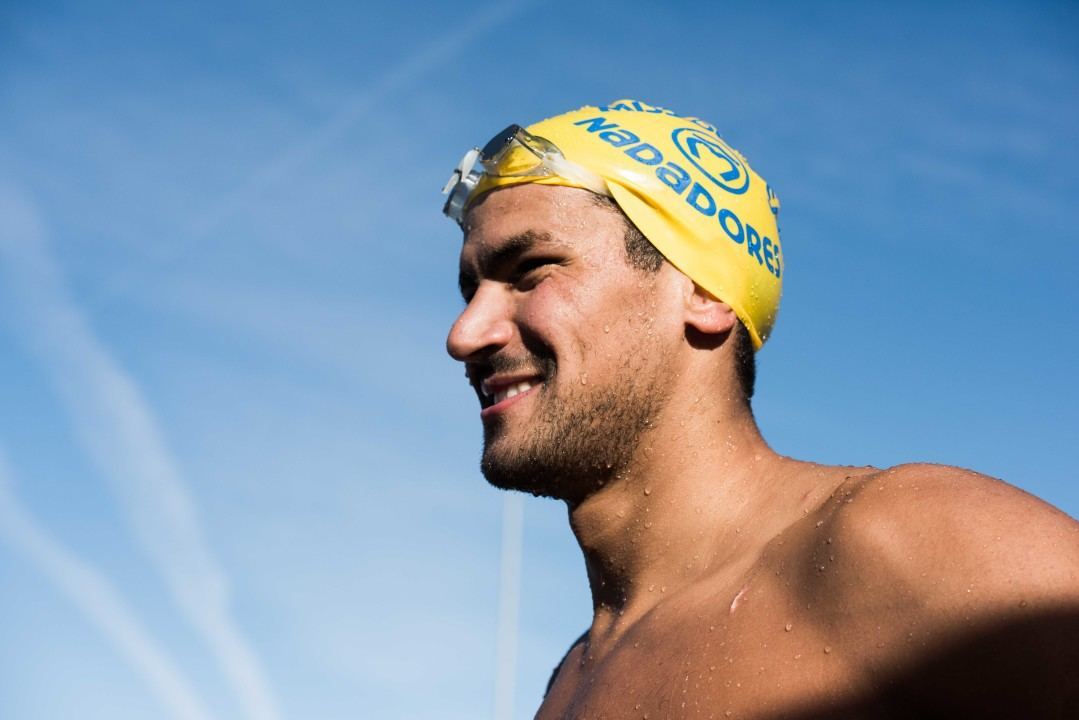 After discussions with both the president of FINA and the Tunisian Olympic Committee, Ous Mellouli will indeed race in a sixth Olympics in Tokyo. Archive photo via Mike Lewis/Ola Vista Photography

After a whirlwind couple of days, Tunisia’s Ous Mellouli announced on Instagram that he’s back in for the Olympic marathon swimming event in Tokyo following discussions with both the president of FINA and the Tunisian Olympic Committee.

Mellouli, a two-time Olympic gold medalist, turned heads earlier this week when he abruptly announced his retirement from competitive swimming after being embroiled in a legal dispute with the Tunisian Swimming Federation.

The federation accused Mellouli and his mother, Khadija Mellouli, of forgery, filing a complaint against her in 2017 and suing Mellouli the following year. Upon announcing his retirement, Mellouli told SwimSwam that he felt “betrayed.”

Just days later, however, Mellouli made a pair of Instagram posts detailing discussions he had with both FINA President Husain Al Musallam and Tunisian Olympic Committee President Mehrez Boussayene.

Mellouli, 37, said he received a phone call from Al Musallam, who “urged” him to participate in the Games.

“Thank you to this generous man for these golden tips and for this new breath of good and encouraging words,” Mellouli wrote, translated from Arabic.

About six hours later, Mellouli detailed his discussion with Boussayene, claiming that the Tunisian NOC President promised to settle the dispute between him and the Tunisian Swimming Federation after the Games.

“The President of the Olympic Committee, Mr. Mehrez Boussayene, pledged to settle the dispute between me and the Tunisian Swimming Federation after the Tokyo Olympics, and insisted on me participating in the marathon final on August 5th,” wrote Mellouli via translation.

“President Boussayene believes in my ability to honor Tunisia and ascend the first places in Tokyo, and pledged to provide the necessary and appropriate conditions for the Olympic champion to prepare for the Paris 2024 Olympics, if I was able to do so.

“I am grateful to the Olympic Committee for this diplomatic intervention.”

Mellouli will compete in his sixth Olympic Games in Tokyo, only entered to race the men’s 10km open water marathon swimming event on August 5.

So happy. Get to it Ous, good luck.

He called their bluff. Baller move.

Good on him he’s the only swimmer* to compete in back to back games since 2000 that’s still active he’s the only one who can claim that now.

You’re correct.
No one else has, not Phelps

Incredibly successful holdout. I respect the hell out of it

I think those of us who live in big sporting countries like the US or Australia or the UK underestimate what the true fame of an Olympic gold medalist is in a place like Tunisia. They are STARS, and they remain stars for the rest of their lives. They wind up having a lot of influence – and not just in sports, but in realms of business and politics too.

That would be a good swimswam article, brings to mind Rita for LIthuania, Joseph for Singapore, Alia for Jamaica, and I’m sure some of the commenters can add a few more!

8
0
Reply
NOT the frontman of Metallica
Reply to  John

Wouldn’t think Alia gets that much attention given Jamaicas success in track and field at the olympics over the years. Maybe Ruta but theres also track and field and basketball for her to share the limelight with.

Everyone in their countries, decades later, still knows who they are.

Absolutely, once he said he would come back if the situation was resolved, I sort of assumed he must have a ton of clout to think it was going to work.

Pretty sure Simone Biles or MP would be the only recent US Olympians that could’ve pulled something like that off. (Someone like Ledecky wouldn’t even have that much leverage, I don’t think – something I realized when I put her in my Weekly Jeopardy! Game and none of my sports-mad friends could remember her name.)

I’m trying to think how to put this delicately…but to pretend that Ous hasn’t had a social life for the last 20 years…doesn’t…precisely…align…with reality.

I heard it was his 6th Olympics.

Tunisian federation is typically the definition of sport federations in Africa , instead of bringing their succesful athletes up , they try everything to bring them down

I do not know anything about the Tunisian Swimming Federation, but it seems like they have been paying him and his family a couple of hundred thousand (counting/converting to USD). How many swimmers receive +$100,000 from USA Swimming each year? In the this swimswam article Ous Mellouli on Surprise Retirement: “I Feel Betrayed” (swimswam.com) it is stated $215,000 over a 2 year period was withheld so a little over $100,000 a year.

For an athlete of his level , double olympic champion, 6th time olympian he even deserves more than that

So you’re comparing the financial compensation of our Olympic swim team to that of their single greatest athlete of all time in any sport.

Imagine if the Lakers were paying Lebron $100,000 per year, and then tried to stiff him on it.

good for you and swimming World Mr. Mellouli!