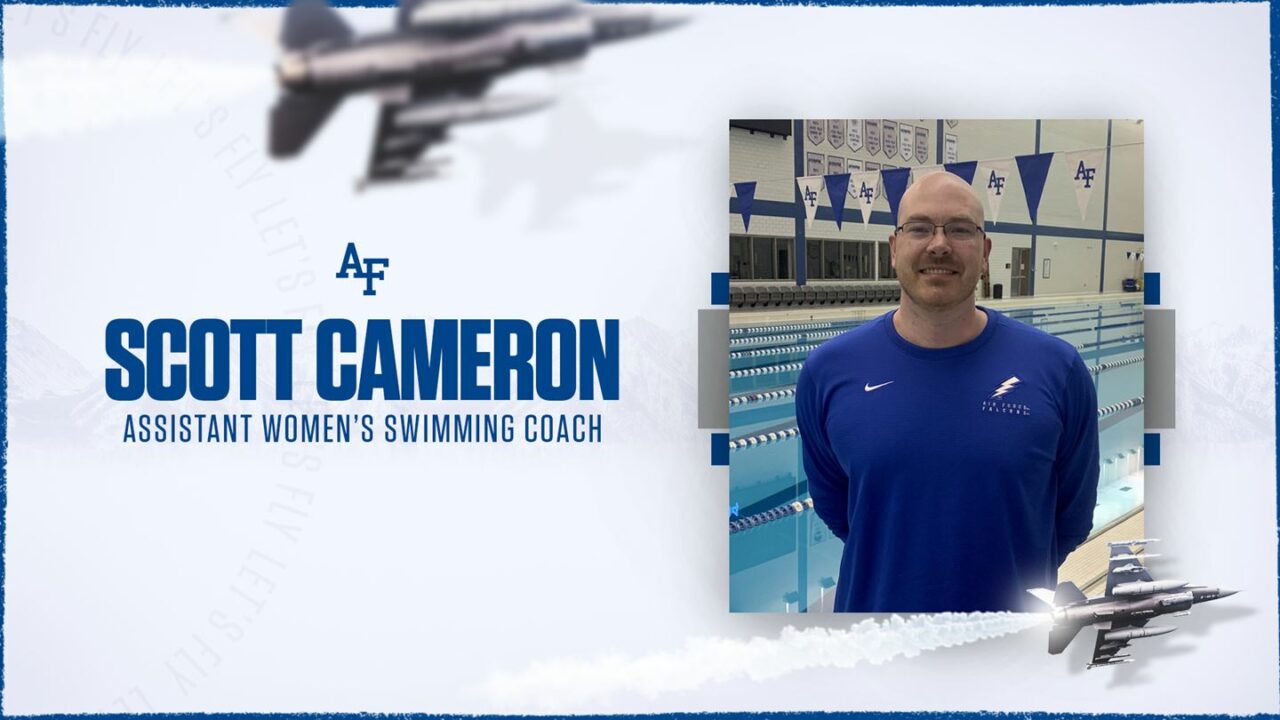 Scott Cameron has been named assistant women’s swimming coach at the Air Force Academy, according to Falcon head coach Colleen Murphy. The former head coach at Illinois State, Cameron comes to the Academy after spending two seasons with the Des Moines Swim Federation.

“We are so excited to welcome Scott to our Air Force family,” Murphy said. “His experience, enthusiasm, and expertise will strengthen our team and continue our leadership development in the pool.  Scott is innovative and creative. He has a true passion for the sport of swimming. His ability to communicate and support our mission will help us achieve our goals and graduate amazing officers.”

Cameron served as director of swimming, head coach and assistant in Des Moines in 2019-20 and 2020-21. Prior to Des Moines, he spent four seasons at the he head coach of the Illinois State women’s swimming team.

“I am extremely excited to be joining Coach Murphy’s staff at the Air Force Academy,” Cameron said. “This is an amazing opportunity to be able to work with some of the brightest and best. I’m looking forward to helping the cadets work towards, and achieve, all of their goals in and out of the pool. “

In his first season at Illinois State, Cameron helped the Redbirds to six school records. Nine Illinois State swimmers and divers earned all-conference recognition.  During his second season at Illinois State in 2016-17, he guided 19 student-athletes to top 10 times. The next season, Cameron had 19 student-athletes with top times in the Missouri Valley Conference. Cameron also led three athletes to first-team all-conference honors in 2017-18. During his four years at ISU, his team broke 32 school records, several of them multiple times, and maintained a GPA over 3.40.

From 2012-15, Cameron served as an assistant women’s swimming coach, recruiting and academic coordinator at the University of Idaho. Idaho improved its conference standing dramatically during Cameron’s tenure, as the team finished second at the Western Athletic Conference (WAC) Championships in 2014. The team excelled in the classroom as well, consistently posting a team grade-point average well above 3.0.

In his three years with the program, Idaho student-athletes set 26 school records and won 12 individual WAC titles. Ten student-athletes met NCAA ‘B’ cuts and one qualified for the NCAA Swimming and Diving Championships.

Prior to Idaho, Cameron assisted the University of Michigan men’s and women’s teams from 2008-12. At Michigan, Cameron held roles that included volunteer assistant coach, manager of operations and video manager.

Cameron also has coaching experience at the club level, with Club Wolverine, based in Ann Arbor, Michigan, from 2008-12. He worked with swimmers of all ages at the club level, including Olympic athletes who competed for the United States, China, Trinidad and Tobago, Barbados, Ireland and Serbia.

He served as head deck coach for Hillsdale College’s Nike Swim Camps from 2009-12, after spending time as a student assistant coach at his alma mater, Grand Valley State, during the 2008-09 season. Cameron was previously a member of the men’s swimming and diving team at Grand Valley State.

A native of Belleville, Michigan, Cameron earned his bachelor’s degree in 2009 from Grand Valley State, where he majored in movement science, with a concentration in coaching. He finished work on his master of education degree in 2014 at Idaho, with a focus in adult organizational learning and leadership.